The end is near and we’re a little sad. The Trailer for the second-half of OZARK Season Four is now out. See it now.

Marty and Wendy are rid of Helen and climb to the top of Navarro’s empire. They find another opportunity to get out of the Ozarks but some past sins won’t stay buried and the most dangerous threats come from blood.

While the end is being signaled for highly-acclaimed Netflix Series OZARK, we at least get the final season rationed in two parts to make it a bit easier to say goodbye. The first-half of Season Four is before is and we catch-up with The Byrdes who refuse to go down in defeat in this game of money laundering.

Enter to the picture Javi (Alfonso Herrera), the erratic nephew of kingpin Omar Navarro (Felix Angel Solis). Unpredictable, he is looking to take the reins and breathe new life into his family’s business, and he could care less about his uncles allegiance to the Byrdes. Using every single resource they have, the Byrdes who are own their successful casino and are more hated than ever in Ozark. Wendy (Laura Linney) is out to clean-up her reputation, attaching herself to philanthropic work, and she is more ferocious than ever, no longer just the supportive wife in the background. She and Marty (Jason Bateman) are in deeper trouble than ever before. And at a quick turn of temper, Javi could end it all for them. And at this point really, what do they have to lose? So they go all in.

At the heart of this first-half of the final season are themes of grieving and feuding. Noah (Skylar Gaertner) rebels against and betrays his family, numb from all his family has brought him through, but when things get really scary, this truly tests the strength of their familial bond. Ruth (Julia Garner) also is coping with the loss of her father and also her lover, Ben (Tom Pelphrey), Wendy‘s brother. Wendy also is coping with the loss too, but is forced to pretend she doesn’t know he’s dead. We see Ruth try to navigate this sense of sadness with rage as she’s looking to build an empire of her own. And though she’s been there to help the Byrde family in the past, their relationship falls on shaky footing this season.

The performances continue to mesmerize and Garner continues to deliver some phenomenal work as Ruth, single-handedly stealing the entire show. She balances the quiet pain that Ruth is experiencing within this season and more than ever before we see her vulnerability beneath her outbursts and tough exterior. Linney also is so good that Wendy convinces herself of all the contrivances she’s created, learning to harness her power as an equal partner in this family operation.

As expected, we’re left on a bit of a cliffhanger, but can’t wait to see how the second-half of this season plays out. Tune-in if you’re looking for an anxiety-ridden good time as the first-half of OZARK Season Four streams Friday, January 21, 2022 on Netflix.

#GIVEAWAY: ENTER TO WIN A COPY OF HBO’S “THE OUTSIDER” ON BLU-RAY

HBO x Mr. Will want to give Readers a chance to win a copy of HBO‘s acclaimed Series, THE OUTSIDER on Blu-ray™.

Based on Stephen King’s bestselling novel of the same name, The Outsider is a new drama series that follows a seemingly straightforward investigation into the gruesome murder of a local boy. When 11-year-old Frankie Peterson’s body is found mutilated in the Georgia woods, police detective Ralph Anderson (Ben Mendelsohn) sets out to investigate – with eyewitnesses and physical evidence pointing to Terry Maitland (Jason Bateman), a popular high school teacher, Little League coach, doting husband and father. While the case appears ironclad, Ralph is baffled by the emergence of contradictory evidence that places his suspect in a neighboring city at the time of the murder. The mysterious set of circumstances surrounding this horrifying crime leads Ralph, a seasoned cop still grieving the recent death of his own son, to bring in unorthodox private investigator Holly Gibney (Cynthia Erivo), whose uncanny abilities he hopes will help explain the unexplainable.

Enter for a chance to #win HBO’s acclaimed Series THE OUTSIDER on Blu-ray™.

HBO‘S THE OUTSIDER is out now digitally and on DVD/Blu-ray™.

Season Three of acclaimed Series OZARK is soon before us. See this brand-new Trailer!

Synopsis:
It’s six months later, the casino is up and running, but Marty and Wendy are fighting for control of the family’s destiny. Marty preaches keeping the status quo. Aided by an alliance with Helen and drug cartel leader Omar Navarro, Wendy plots for expansion. But when Wendy‘s brother Ben comes into town, everyone’s lives are thrown into chaos.

We’ve missed the enthralling OZARK ever since we binged season one in one night this past winter.  Are you ready for some big news about season two?

In its much-anticipated second season, Ozark continues to follow Marty Bryde and his family as they navigate the murky waters of life within a dangerous drug cartel. With Del out, the crime syndicate sends their ruthless attorney Helen Pierce to town to shake things up just as The Byrdes are finally settling in. Marty and Wendy struggle to balance their family interests amid the escalating dangers presented by their partnerships with the power-hungry Snells, the cartel and their new deputy, Ruth Langmore, whose father Cade has been released from prison. The stakes are even higher than before and The Byrdes soon realize they have to go all in before they can get out.

Get a first look at new stills from Season Two:

In OFFICE CHRISTMAS PARTY, when the CEO (Jennifer Aniston) tries to close her hard-partying brother’s branch, he (T.J. Miller) and his Chief Technical Officer (Jason Bateman) must rally their co-workers and host an epic office Christmas party in an effort to impress a potential client and close a sale that will save their jobs. The latest comedy from directors Josh Gordon and Will Speck (BLADES OF GLORY) co-stars Kate McKinnon, Olivia Munn, Jillian Bell, Rob Corddry, Vanessa Bayer, Randall Park, Sam Richardson, Jamie Chung and Courtney B. Vance in the funniest movie of the holiday season.

#GIVEAWAY: ENTER TO WIN PASSES TO SEE “THE GIFT”

D Films + Mr. Will want to take Readers to see an Advance Screening of THE GIFT! All screenings take place in Toronto, Ottawa, Edmonton, Vancouver, Calgary, Winnipeg and Halifax on Wednesday, August 5, 2015.

Simon (Jason Bateman) and Robyn (Rebecca Hall) are a young married couple whose life is going just as planned until a chance encounter with an acquaintance from Simon’s high school sends their world into a harrowing tailspin. Simon doesn’t recognize Gordo (Joel Edgerton) at first, but after a seemingly coincidental series of encounters proves troubling, a horrifying secret from their past is uncovered after nearly 20 years. As Robyn learns the unsettling truth about what happened between Simon and Gordo, she starts to question: how well do we really know the people closest to us, and are past bygones ever really bygones?

Basically, I ROFLd all through 2012′s Horrible Bosses and I am certain from the likes of it, it pretty much will be the same seeing HORRIBLE BOSSES 2!

A Teaser Trailer for the Sequel has just surfaced and the laughs just seem to pick-up where they left-off last time. I personally loved Jennifer Aniston as the sex-crazed Boss of Charlie Day‘s Dale and she’s up to her old tricks yet again here.  Read our Chat with Sudeikis back in 2011 as he was in-town promoting Horrible Bosses.

eOne Films and Mr. Will Wong wants to give Toronto Readers a chance to see the hilarious BAD WORDS on Thursday, March 20, 2014, starring and directed by JASON BATEMAN!  The Comedy premiered at TIFF ’13 to overwhelmingly positive response!

Official Synopsis:
When he finds a loophole in the rules and regulations of the National Quill Spelling Bee, Guy Trilby (Jason Bateman), a 41-year-old High School Dropout, enters. Cranky, badly-behaved and foul-mouthed, he’s determined to win at all costs.

He gets through the regionals, then, at the national level, he meets young competitor Chaitanya (Rohan Chand), a sweet, innocent oy who doesn’t seem to notice Guy‘s nasty demeanour.

http://www.mrwillwong.com/badwords @MRWILLW wants us to #win Advance Screening Passes in #Toronto to see #BAD WORDS! Out 3/28! 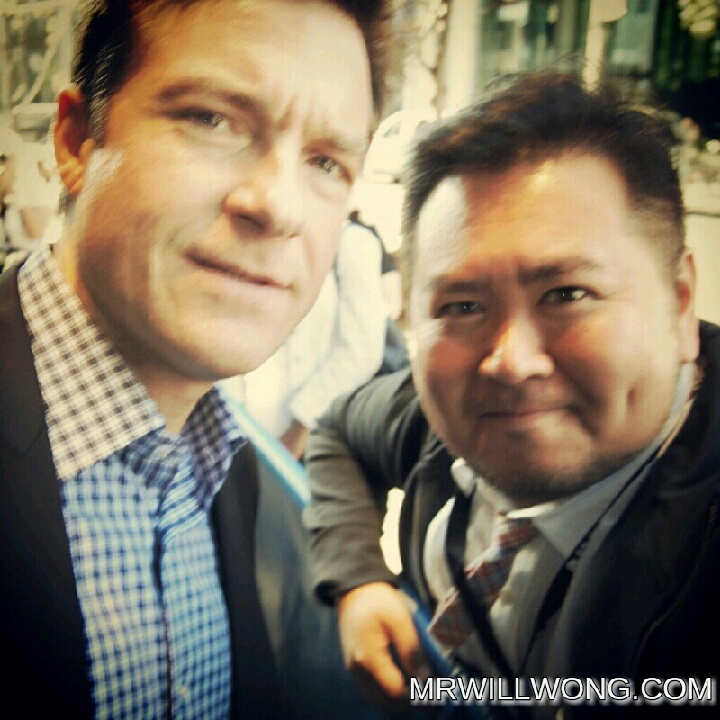