There are plenty of Novels that get adapted into Features or Miniseries and down the road the author of the original text comes out against the final Hollywoodized version of their product. Stephen King is rather famous for disliking adaptations of his own work, even when the Hollywoodization is regarded as a classic, King still opposes. When watching some of the more recent King adaptations, there is usually a lot to be desired still, however with Apple TV+’s Lisey’s Story there is very little more to desire after the eight episodes. This is in part due to the fact that King adapted his own work and legendary Director Pablo Larrain directed the Series, but it hits the bullseye precisely.

Lisey Landon (Julianne Moore) lost her literary genius husband, Scott (Clive Owen) and decided to try and move on with her life and leave his unpublished works as such. Unfortunately for Lisey, a stalker Jim Dooley (Dane DeHaan) cannot accept that Scott’s work will go unpublished and starts to torment and stalk Lisey. As this progresses, it gets more intense and terrifying for Lisey as she is a caregiver for her sister, Amanda (Joan Allen), who needs around the care attention for her mental health. Lisey is helped by her other sister, Darla (Jennifer Jason Leigh) with Amanda but has her own griefs and traumas to process as well.

What makes Lisey’s Story so captivating is the story. King brilliantly interweaves flashbacks of Lisey remembering her romance with Scott, the modern day and supernatural occurrences. The way the story comes together is seamless, full of suspense, awe, and thrills. Pablo Larrain also masterfully directs this rich tapestry of words with such ease and brilliance that audiences will be captivated throughout the Series. The entire Show is engulfed in beautiful storytelling, visuals and direction that is sensational.

With any strong direction and storytelling only so much can be accomplished without a powerhouse Cast, and thankfully for Lisey’s Story everyone brings their A-Game. Moore astounds as Lisey, trying to process her PTSD of losing her husband, while being tormented by her stalker and flashbacks she so desperately tried to move on from. Clive Owen playing Scott, trying to help Lisey through his puzzle in helping her process her grief is nothing shy of captivating. However it is Dane DeHaan who gives a career best performance, as his performance is chilling, haunting, and terrifying. He embodies the darkness of King excellently and does not shy away from becoming the monster he was written out to be.

When there is a hauntingly brilliant Script, beautiful direction, and superb acting the final product is nothing short of fantastic. Lisey’s Story may start off with a lot of supernatural elements begging the audience to suspend belief briefly, but the payout and deliverance of the final product is more than worth the time. Sheer ingenuity and execution makes Lisey’s Story another phenomenal entry into the Apple TV+ catalogue and an adaptation King himself can approve of Lisey’s Story streams on Apple TV+ now.

Ang Lee‘s latest, GEMINI MAN stars Will Smith up against himself and here’s a first look at its Trailer!

Synopsis:
Gemini Man is an innovative action-thriller starring Will Smith as Henry Brogan, an elite assassin, who is suddenly targeted and pursued by a mysterious young operative that seemingly can predict his every move. The film is directed by Academy Award®-winning filmmaker Ang Lee and produced by renown producers Jerry Bruckheimer, David Ellison, Dana Goldberg and Don Granger. Also starring are Mary Elizabeth Winstead, Clive Owen and Benedict Wong.

#INTERVIEW: LUC BESSON ON “VALERIAN AND THE CITY OF A THOUSAND PLANETS”

Visionary Filmmaker Luc Besson has long been thrilling moviegoers with a breathtaking catalog of work.  Whether it be Léon the Professional, The Fifth Element, Nikita, The Messenger: The Story of Joan of Arc or more recently Lucy, his Films have mesmerized a generation and raised the bar of innovation for his peers.  While often wearing Writer, Producer and Director’s hats simultaneously, he also was responsible as Writer and Producer several smash success including the Taxi, Taken and The Transporter franchises. The personable and private (he doesn’t like being photographed) Co-Founder of massively successful EuropaCorp has gifted us with Films which at once are high art as they are commercial, resonating in a big way with film lovers worldwide.

We had the pleasure of journeying for the first time ever to Montreal where Besson met Canadian Press in support of his latest Action-Fantasy, Valerian and the City of a Thousand Planets. The Film starring Dane DeHaan and Cara Delevingne, is based on the internationally-adored graphic novel series Valérian and Laureline, set for release late July.  The Film sees its two leads sent on a mission to Alpha where a dark force threatens a peaceful existence, tasked with protecting the future of the universe.

What are your earliest recollections of Valérian and Laureline and at what point did you decide to adapt it for the big screen?

Besson: “Actually, very late. I was a big fan of the comics since I was 10-years-old.  It was a like a little treasure I kept inside me and I never thought about making a Film about it.”.

“Jean-Caude Mezieres  (one of the creators of Valérian and Laureline) was working of The Fifth Element 20 years ago abd at one point he asked ‘Why are you doing this stupid 5th Element thing?’.”. “I read the comic again and it wasn’t possible with technology then with four characters and 2,000 aliens.”.

“We needed for Avatar to come along. Avatar was an open tool box.  Cameron (James) made it all possible.”.

You’ve previously paired with the artistic greats like Moebius on The Fifth Element. Describe the importance of celebrating French artistry here too in adapting the graphic novels on which Valerian is based upon, to a worldwide audience.

Besson: “There is no nationality with art. No one asks you for a passport for your drawing.”.

“First is the story. What do you want to say to people?  When this is done – and  I spent a lot of time working on this – then I think what clothes I am gonna put on the script.”.

“For Valerian, I contacted artists around world and wound-up with a team 10 to 12 guys over three years from China, Brazil, American, France. They bring their own sensitivites and drew almost 6,00 drawings. I love tons of ideas coming.”.  He adds, “There are over 2,000 costumes in Valerian.”.

“Storytelling is the main stone and I love to spend many, many months making it look better.”.

You have a great eye for talent.  Describe for what went behind the inspired casting choices behind Valerian.

Besson: “I’m not sensitive to the marketing point of view. I try to take best actor for the part. If they’re well known and popular, great. If not, I still take it.”.

On stars Dane DeHaan and Cara Delevingne, he says. “They’re only 25, so fresh and so young. It reminds me of when I was 16-years-old watching Star Wars and seeing Luke Skywalker and Han Solo. We didn’t know who these guys were.”.

eOne Films release Valerian and the City of a Thousand Planets Friday, July 21, 2017.

#FIRSTLOOK: NEW TRAILER FOR “VALERIAN AND THE CITY OF A THOUSAND PLANETS”

Fresh off her appearance at CinemaCon this week, Supermodel/Actress Cara Delevingne soon will be seen in the exciting VALERIAN AND THE CITY OF A THOUSAND PLANETS, which stars Dane DeHaan in the titular role. The new Trailer for the summer release has just been released!

Synopsis:
VALERIAN AND THE CITY OF A THOUSAND PLANETS is the visually spectacular new adventure film from Luc Besson, the legendary director of The Professional, The Fifth Element and Lucy, based on the ground-breaking comic book series which inspired a generation of artists, writers and filmmakers.

In the 28th century, Valerian (Dane DeHaan) and Laureline (Cara Delevingne) are a team of special operatives charged with maintaining order throughout the human territories. Under assignment from the Minister of Defense, the two embark on a mission to the astonishing city of Alpha—an ever-expanding metropolis where species from all over the universe have converged over centuries to share knowledge, intelligence and cultures with each other. There is a mystery at the center of Alpha, a dark force which threatens the peaceful existence of the City of a Thousand Planets, and Valerian and Laureline must race to identify the marauding menace and safeguard not just Alpha, but the future of the universe.

#GIVEAWAY: ENTER TO WIN “WORDS AND PICTURES” ON DVD

Directed by Fred Schepisi, WORDS AND PICTURES (Roxanne, Mr. Baseball) is a delightful Romantic-Drama we can’t wait for you discover.  D Films and Mr. Will want to give Canadian Readers a chance to win on DVD a copy of the Film starring Clive Owen and Juliette Binoche.

An English teacher (Clive Owen) who’s also a writer is having a dry spell. He challenges the school’s new art teacher (Juliette Binoche), who is having difficulty of her own as her arthritis affects her ability to paint, to a “war” between words and pictures, in which the students have to decide which is more powerful. In the process, an unlikely romance begins. 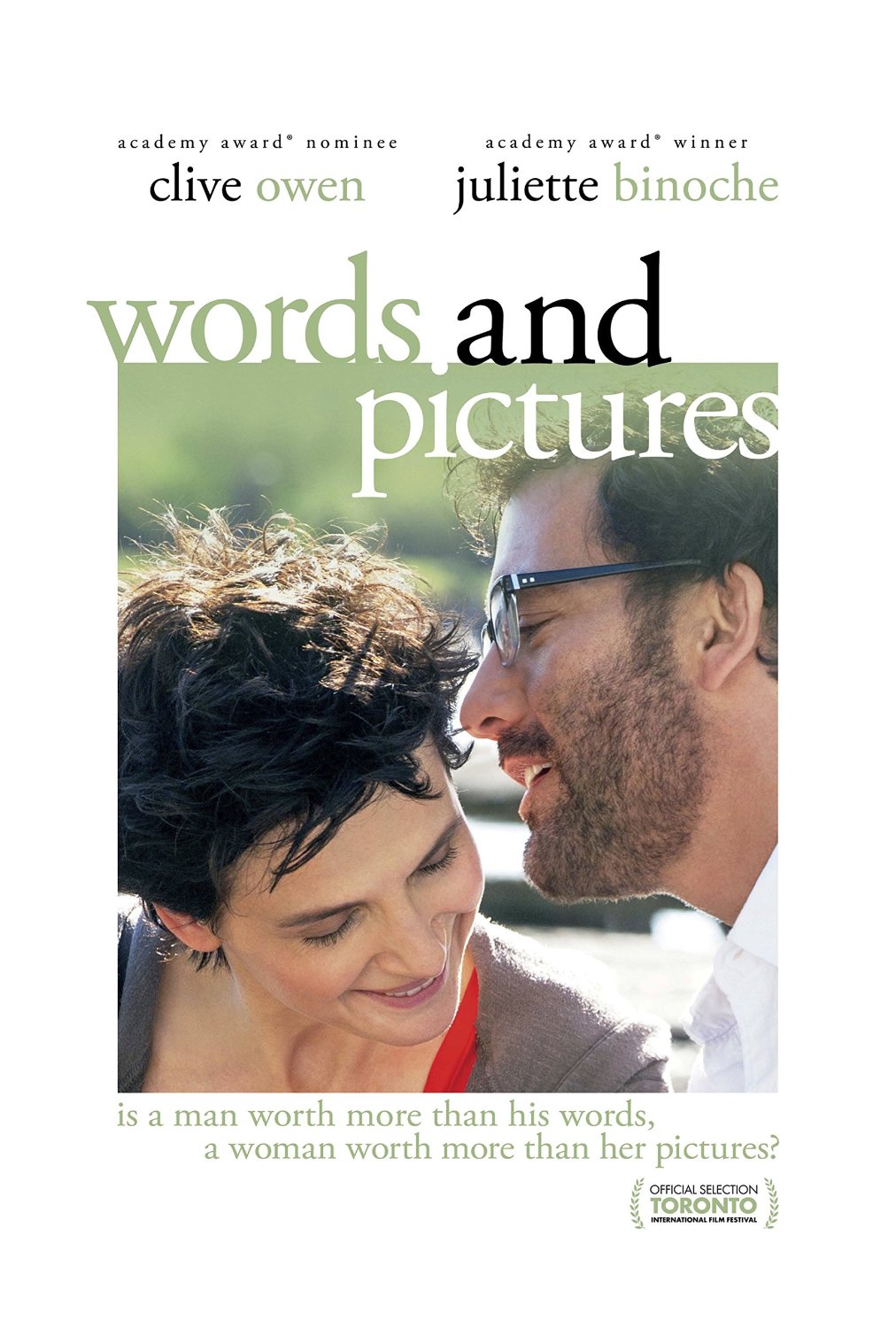 #GIVEAWAY: ENTER TO WIN RUN-OF-ENGAGEMENT PASSES ACROSS CANADA FOR “WORDS AND PICTURES”

Mr. Will and D Films want to take Readers across Canada to see the delightful WORDS AND PICTURES, which premiered in Toronto last Fall at TIFF ’13!

Official Synopsis:
Jack Marcus, a charismatic writer, and Dina Delsanto, an enigmatic, well-respected painter, are both teachers at a New England prep school. As they supervise a spirited ongoing debate between their students as to whether or not a picture (her forte) really is worth a thousand words (his domain), Jack’s extroverted wit clashes with Dina‘s private nature, and mutual dislike turns to rivalry, then rivalry to powerful attraction.