#FIRSTLOOK: TRAILER FOR “THE MARKSMAN”

Liam Neeson and Kathryn Winnick star in THE MARKSMAN, coming next month!

A rancher on the Arizona border becomes the unlikely defender of a young Mexican boy desperately fleeing the cartel assassins who’ve pursued him into the U.S.

SYNOPSIS:
From Academy Award®-winning director Steve McQueen (“12 Years a Slave”) and co-writer and bestselling author Gillian Flynn (“Gone Girl”) comes a blistering, modern-day thriller set against the backdrop of crime, passion and corruption. “Widows” is the story of four women with nothing in common except a debt left behind by their dead husbands’ criminal activities. Set in contemporary Chicago, amid a time of turmoil, tensions build when Veronica (Oscar® winner Viola Davis), Linda (Michelle Rodriguez), Alice (Elizabeth Debicki) and Belle (Cynthia Erivo) take their fate into their own hands and conspire to forge a future on their own terms. “Widows” also stars Liam Neeson, Colin Farrell, Robert Duvall, Daniel Kaluuya, Lukas Haas and Brian Tyree Henry.

Check-out some of the Trailers for this year’s Opening Night and Closing Night Films, the latter narrated by Liam Neeson.

IN THE NAME OF PEACE: JOHN HUME IN AMERICA (narrated by Liam Neeson) – CLOSING NIGHT FILM

For the full programming lineup and how to get tickets, click here:
http://toirishfilmfest.com/2018-tirff-line-up

Paramount Pictures Canada + Mr. Will want to give Readers in Toronto and Montreal a chance to see first, Martin Scorcese‘s SILENCE. Screenings take place as follows:

Synopsis:
Martin Scorsese’s SILENCE tells the story of two Christian missionaries (Andrew Garfield and Adam Driver) who face the ultimate test of faith when they travel to Japan in search of their missing mentor (Liam Neeson) – at a time when Christianity was outlawed and their presence forbidden.  The celebrated director’s 28-year journey to bring  Shusaku Endo’s 1966 acclaimed novel to life will be in theaters this Christmas.

Emotional, spectacular, adventurous! All of the above apply to this new Trailer for A MONSTER CALLS!

Synopsis:
A visually spectacular drama from acclaimed director Juan Antonio Bayona (“The Impossible”), based on the award-winning children’s fantasy novel. 12-year-old Conor (Lewis MacDougall) attempts to deal with his mother’s (Felicity Jones) illness and the bullying of his classmates by escaping into a fantastical world of monsters and fairy tales that explore courage, loss, and faith.

Universal Pictures Canada + Mr. Will want to take Readers across Canada to see TED 2!  The  adorable, foul-mouth Teddy Bear back in 2012 won ours hearts in a big way and if there’s one Film we’ve been waiting for, this is it! Screenings take place in Toronto, Ottawa, Montreal, Vancouver, Calgary, Edmonton and Winnipeg, on Wednesday, June 24, 2015.

Official Synopsis:
Ted marries Tami-Lynn, his girlfriend from the first film, and the couple try for a baby together, with Ted asking his best friend John to provide sperm for artificial insemination. However, to have custody of this child, he has to prove to a court of law that he is human.

Watch the Trailer (for Mature Audiences): 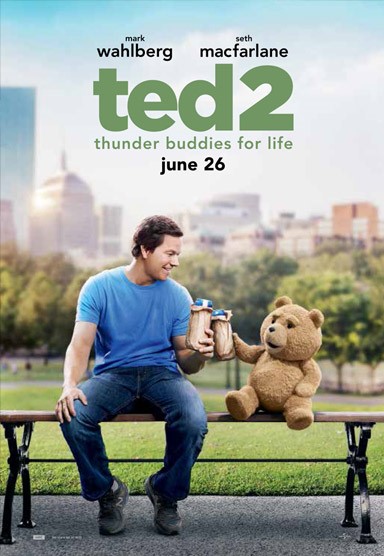 Hot on the success of his Box Office domination this weekend, Liam Neeson stars in yet another high-octane Action-Thriller, RUN ALL NIGHT, its new Trailer just getting released this past weekend.

Official Synopsis:
Brooklyn mobster and prolific hit man Jimmy Conlon (Liam Neeson), once known as The Gravedigger, has seen better days. Longtime best friend of mob boss Shawn Maguire (Ed Harris), Jimmy, now 55, is haunted by the sins of his past—as well as a dogged police detective (Vincent D’Onofrio) who’s been one step behind Jimmy for 30 years. Lately, it seems Jimmy’s only solace can be found at the bottom of a whiskey glass.

But when Jimmy’s estranged son, Mike (Joel Kinnaman), becomes a target, Jimmy must make a choice between the crime family he chose and the real family he abandoned long ago. With Mike on the run, Jimmy’s only penance for his past mistakes may be to keep his son from the same fate Jimmy is certain he’ll face himself…at the wrong end of a gun. Now, with nowhere safe to turn, Jimmy just has one night to figure out exactly where his loyalties lie and to see if he can finally make things right.