Terminally-ill matriarch Lily (Susan Sarandon) invites her family and close friend to her home for one final gathering.

Blackbird has a lot of emotional impact and a captivating story at its core about assisted-suicide. In using multiple characters, Screenwriter Christian Torpe is able to give a well-balanced view on this often tough topic. Those characters are brought beautifully to the screen by the impeccable Sarandon, along with scene-stealing and at times comedic Kate Winslet, and the captivating Mia Wasikowska.

We almost forgot about TAMMY for a second there! A brand new Trailer has just surfaced for this hilarious-looking Collaboration between Funnywoman Melissa McCarthy and Husband Ben Falcone!

Official Synopsis:
Tammy (Melissa McCarthy) is having a bad day. She’s totaled her clunker car, gotten fired from her thankless job at a greasy burger joint and, instead of finding comfort at home, finds her husband getting comfortable with the neighbor in her own house. It’s time to take her boom box and book it. The bad news is she’s broke and without wheels. The worse news is her grandma, Pearl (Susan Sarandon), is her only option—with a car, cash, and an itch to see Niagara Falls. Not exactly the escape Tammy had in mind. But on the road, with grandma riding shot gun, it may be just what Tammy needs.

Absolutely ridiculous!  Melissa McCarthy in her element yet again.  Teaming-up with her Husband Ben Falcone, who writes and directs the Funnywoman’s next effort, TAMMY, we get a quick glimpse of what could be the Comedy of the Summer in this hilarious Teaser Trailer!

After losing her job and learning that her Husband has been unfaithful, a Woman hits the road with her profane, hard-drinking Grandmother.

The Sightings are pouring in for That ’70s Show Star Topher Grace, which has many of us asking – just what is the Eric Forman doing in Toronto?  Spotted at a Moroco Chocolat grabbing Dinner, Subway last week grabbing a Sandwich and at an exclusive GC Timepieces Party, the Camera-shy Actor turned quite a few surprised heads last week.

Grace is in-town till mid-April filming Thriller The Calling from Director Jason Stone.  The Film which has him starring alongside Susan Sarandon, centers around a Detective named Hazel Micallef who works in a quiet town which gets awakened by a string of gruesome murders.  It also is based on the Novel by Inger Ash Wolfe and re-teams Sarandon and Grace together once again. Their Rom-Com The Big Wedding hits theatres on April 26, 2013 via eOne Films.  Filming for The Calling is set to take place in Pickering this week.

Want to approach him for a Photo?  Think twice.  Eager Fans asked him repeatedly for a Photo last week, but unfortunately were denied.  Grace likes his Privacy.

VVS Films, Touchwood PR and Mr. Will Wong want to give Readers a chance to see Arbitrage next week – Wednesday, September 26, 2012 at Varisty Cinemas.  Richard Gere is featured here in easily his best performance in years, while a solid Support Cast also are garnering tons of Awards buzz including Susan Sarandon, Nate Parker and Brit Marling.

Nicholas Jarecki’s directorial debut is a taut and alluring suspense thriller about love, loyalty, and high finance. When we first meet New York hedge-fund magnate Robert Miller (Richard Gere) on the eve of his 60th birthday, he appears the very portrait of success in American business and family life. But behind the gilded walls of his mansion, Miller is in over his head, desperately trying to complete the sale of his trading empire to a major bank before the depths of his fraud are revealed. Struggling to conceal his duplicity from loyal wife Ellen (Susan Sarandon) and brilliant daughter and heir-apparent Brooke (Brit Marling), Miller‘s also balancing an affair with French art-dealer Julie Côte (Laetitia Casta). Just as he’s about to unload his troubled empire, an unexpected bloody error forces him to juggle family, business, and crime with the aid of Jimmy Grant (Nate Parker), a face from Miller’s past. One wrong turn ignites the suspicions of NYPD Detective Michael Bryer (Tim Roth), who will stop at nothing in his pursuits. Running on borrowed time, Miller is forced to confront the limits of even his own moral duplicity. Will he make it out before the bubble bursts? 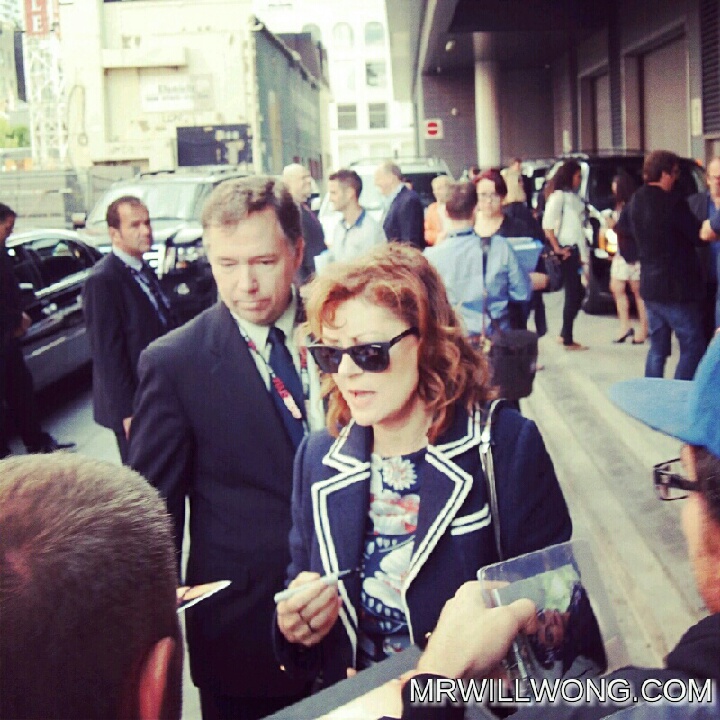 Fans were delighted to see  acclaimed Actress Susan Sarandon arriving at the Press Conference for Warner Bros.’ upcoming Sci-Fi Epic, Cloud Atlas, making her way into the Crowd to sign some Autographs. Although it was only last year we saw her here to celebrate the 20th anniversary of Thelma & Louise, it is always a delight to see her light-up a Crowd with her smile.  Beauty!