Moviegoers have Romance on their minds pre-Valentine’s Day weekend as FIFTY SHADES FREED steams-up the Box Office with $40.3 million from 3,768 theatres for Universal Pictures. While the Franchise finale is unable to eclipse the $80 million its first chapter earned opening weekend in 2015, this by no means is a disgrace as it falls just short of its 2017 installment, which opened with $46 million. It gets 11% on the Tomatometer from Critics and a B+ CinenaScore from Audiences.

In second is PETER RABBIT with $22 million from 3,725 theatres for Sony Pictures. It gets a 58% on the Tomatometer and an A- CinemaScore.

THE 15:17 TO PARIS debuts in third with $11.7 million from 3,042 theatres for Warner Bros. The Clint Eastwood Film centering on the true story of three Americans who confronted a terrorist aboard a train, gets a 20% on the Tomatometer and a B- CinemaScore.

JUMANJI: WELCOME TO THE JUNGLE lands in fourth this weekend with $9.6 million. Over eight weeks it has grossed $365 million for Sony Pictures.

THE SHAPE OF WATER is in ninth with $3 million for Fox Searchlight, putting the Oscar Contender close to the $50-million-mark domestically.

DEN OF THIEVES rounds-out the Top Ten with $2.7 million in its fourth week, totaling $40.8 million for STX Entertainment/VVS Films.

Den of Thieves fifty shades of grey Jumanji Peter Rabbit The 15:17 to Paris The Shape of Water 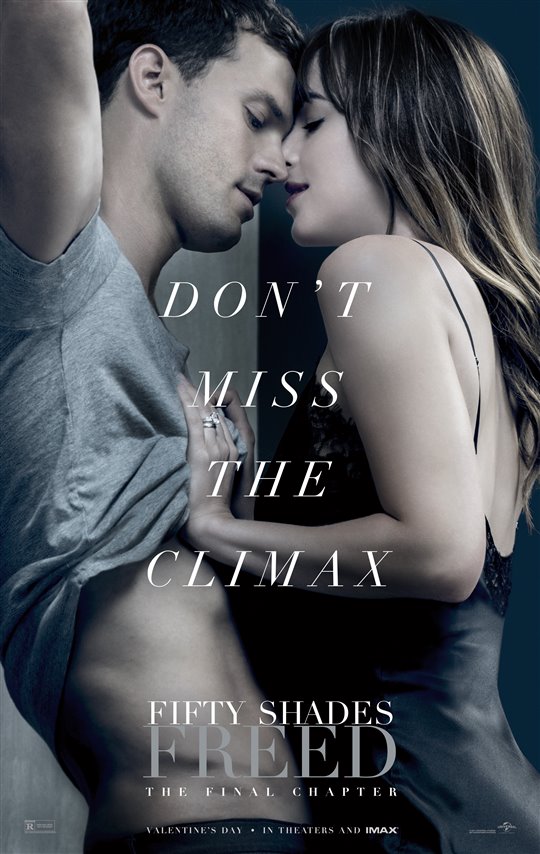 THE LEGO BATMAN MOVIE gets the love of Moviegoers taking the top of the Box Office in its debut Valentine’s Day weekend with $54.5 million from 4,088 theatres for Warner Bros. Pictures. Its 2014 predecessor made $69 million in its opening, while Critics love it equally as much with 91% on the Tomatometer and Audiences gave it a great A- CinemaScore.

Debuting right behind in second with $48.3 million from 3,710 theatres  is FIFTY SHADES DARKER, also a second series installment like LEGO. It gets 10% on the Tomatometer and a much better B+ CinemaScore from Audiences. By contrast, its predecessor made $85 million it its 2015 debut.

JOHN WICK: CHAPTER 2 opens in third with $29.6 million from 3,113 theatres for Lionsgate Films/eOne Films. This bests the series’ first installment which opened in 2014 with $14.4 million domestically. It gets a fantastic 91% on the Tomatometer from Critics and also an A- CinemaScore.

SPLIT still is going strong in fourth after three weeks on-top, with $9.1 million from 2,961 theatres for Universal Pictures. It has made $112 million thus far.

A DOG’S PURPOSE is in sixth with $7.7 million for Universal Pictures, a tally of $42.9 million over three weeks.

LA LA LAND is in eighth with $5 million for Lionsgate Films/eOne Films, tallying-in at $126 million over ten weeks.

THE SPACE BETWEEN US rounds-out the Top Ten with $1.7 million for STX Entertainment/VVS Films, a total $6.5 million over two weeks.

We don’t care who knows. We are so stoked for FIFTY SHADES DARKER! If you loved the first Film and the novels, you will love this new Trailer.

Synopsis:
After leaving Christian (Jamie Dornan), Ana (Dakota Johnson) starts a new job as personal assistant to the editor, Jack Hyde (Eric Johnson), at a publishing company. However, she finds herself having to fend off advances from her new boss.

Christian purchases the publishing company where Ana is working and stops her from going on an overnight business trip with Jack, because Christian knows Jack‘s history of sexually harassing his assistants. Wanting Ana back in his life, Christian convinces her to give him another chance. After agreeing to her demands for a new arrangement, they begin to build trust and find stability.

However, when Ana meets Elena (Kim Basinger), the woman who seduced Christian when he was 15 years old, she’s unhappy that Christian continues to be friends with her. When Elena realizes that Christian has romantic feelings for Ana, she tries to throw a wrench in the young couple’s relationship.