Focus Features will release THE OUTFIT in theatres on
March 18, 2022.

#FIRSTLOOK: NEW TRAILER FOR “THE OUTFIT”

We love a good Thriller. Here’s a new Trailer for THE OUTFIT, from the same Director who brought us Oscar-nominated THE IMITATION GAME.

From the Academy Award-winning writer of The Imitation Game (Graham Moore) comes The Outfit, a gripping and masterful thriller in which an expert tailor (Academy Award winner Mark Rylance) must outwit a dangerous group of mobsters in order to survive a fateful night.

#INTERVIEW: ZOEY DEUTCH + RY RUSSO-YOUNG ON “BEFORE I FALL”

A little bit like Mean Girls, a little bit like Groundhog Day, BEFORE I FALL, based on the Novel by Lauren Oliver, takes us inside teenager Samantha‘s(Zoey Deutch) world after a tragic car accident on Cupid Day has her re-living that same day over and over until she fully understands how it is her actions impact her own destiny. In town to promote the Film which closed-out the TIFF Next Wave Film Festival, were its Director Ry Russo-Young and star Zoey Deutch and we had the pleasure of chatting with them.

When did you first get involved with the source-material and what was one of the biggest challenges bringing it to the screen?
Ry: I read the script about three years ago and what I was so attracted to was that is surprised me. I sort of thought that it was a superficial Teen Movie in the first 20 pages and wasn’t sure if I was on board with who these characters were and all that. Then I found Sam’s journey to be unexpectedly emotional and moving and profound. So thats what attracted me to the Movie.

Zoey: What attracted me initially was that I felt like…its so rare that I read a script that feels like it has the opportunity to be both extremely thought-provoking and moving, while also being entertaining. And not that I had any idea or expectation it would make it to Sundance or TIFF Next Wave or be a wide release. But I felt that it was so thought-provoking and so entertaining and so wonderful to watch a young girl go through so many different variations of her own self to explore all the contradictions and complications and intricacies of being a young woman. I really thought that that was important and inspiring and a really wonderful opportunity too.

Ry: It’s also a story we don’t get to see so often its a classic heroes journey with a female protagonist that is really at its heart. It’s the kind of Movie that I wish I had when I was a teenager, so its kinda like be the change that you want to see.

The chemistry between the group of friends is very organic. Did this chemistry need work or did it come naturally?

Ry: I think it was a little bit of both to be honest. A lot of the girls, Zoey’s job, she was in every scene it was so demanding a lot of the girls hung-out. We rehearsed a bit with all four of them. They hung-out independently as well a lot they went out to dinner.

Zoey: That also fed into the social cues of that group. Because I really did want Sam to feel like more of a follower than any other members of the group. Yes, she was probably like second in command to Lindsay but it was almost like a positive that I didn’t get to hang out them as much as they got to hang out with each other because they had developed this thing and I still felt a little but left out because I wasn’t there, I wasn’t experiencing those things. They were posting things on Instagram, I wasn’t there, and I would feel left-out. And it helped me. It really helped me feel lonely and left-out. It was actually kind of useful. But the girls…when I did get to hang-out with them they are the coolest, funniest, sweetest most wonderful women and and so supportive. And I am really truly friends with all of them. And I wish they were here now. We were texting them, chatting them, texting them all pictures of us.

Ry: It’s a little but of both in terms of we did some work and then they were also so natural with each other and everyone was down and had great energy.

These so called ‘mean girls’ all have their own back stories. Why was that important? To make sure that that backstory was shown?

Zoey: So vital. And I feel like, I don’t know what your experiences in middle school or high school were like, but for me people weren’t one thing. They were like Sam, she’s a bully and she’s bullied. Like Lindsay, she’s mean but for a reason. It comes from a place of real vulnerability and a fear for vulnerability. And I thought that was so beautiful that there really wasn’t a clear distinct hero or villain in the Movie. That you see so many facets of female experience.

Ry: Diversity is really key. To me that is the hope for a Movie like this…is that there are other Films. That this sort of leads the way for more Films by and about women. And one of the things in terms of…it was everything to me. Because otherwise we would just have stereotypes right? We would have these archetypes and stereotypes that we have seen a thousand times. And part of whats interesting about the Movie is that you do realize that everyone has their own humanity and is their own kind of complicated person battling their own inner demons. I always try to think about…to think about every character as if it was their own Movie about that character.

#SPOTTED: ZOEY DEUTCH + RY RUSSO-YOUNG IN TORONTO FOR THE TIFF NEXT WAVE FILM FESTIVAL WITH “BEFORE I FALL”

Right in time for Family Day weekend, Director Ry Russo-Young and actress Zoey Deutch arrived in Toronto for the TIFF Next Wave Film Festival. The weekend-long event features youth-centric programming and had the distinction of screening for us the Sundance selection, based on the Novel by Lauren Oliver.

The Teen Drama shot over 26 days in British Columbia with a half-Canadian crew, centers on a girl named Samantha (Deutch) who on her school’s annual Cupid Day is set to take her relationship to the next level with her boyfriend Rob (Kian Lawley). Joining her for a party that night are best friends Lindsay (Halston Sage), Elody (Medalion Rahimi) and Allison (Cynthy Wu).

Let’s face it – the girls aren’t the nicest but there are reasons behind that. A victim of their bullying is the fragile Juliet (Elena Kampouris). After a tragic car crash, Samantha awakens to find herself reliving Cupid Day allover again, each time learning something new, yet somehow still unable to avoid tragic circumstances.  Despite its non-linear storytelling which at once advances the plot while repeatedly going back in time to the same starting point, we see Samantha‘s character grow despite her revisiting different ways she could have lived that day until ultimately we see she was actually in control of her own destiny all along.

Make no mistake, despite it feeling and looking on paper much like mainstream Young Adult fare, its marketing and distribution is more geared to the Indie-loving Festival-Goer. Before I Fall goes to much darker places than your typical YA fare, asking more uncomfortable questions than others and for that we applaud it. We love Deutch‘s heartfelt performance, us falling more in love with her Samantha the more the story progresses.  Several performances here are a real revelation including Queen Bee Halston Sage and also Australian Liv Hewson (seen recently in Netflix‘s Santa Clarita Diet) who while only in a couple scenes, really leaves an impression as lesbian classmate Anna Cartullo. Before I Fall gives us light in a dark time and it is impossible not to leave feeling enlightened through it all.

See  some footage of Russo-Young and Deutch who took the time to greet and chat with Fans following the Film:

#GIVEAWAY: ENTER TO WIN PASSES TO THE 2017 TIFF NEXT WAVE FILM FESTIVAL PREMIERE OF “BEFORE I FALL”

We’ve got an exciting opportunity for those of you in Toronto!  Premiering at the TIFF Next Wave Film Festival this weekend, BEFORE I FALL already has made a splash at Sundance!  In town for the occasion is its star Zoey Deutch and Director Ry Russo-Young!  Elevation Pictures x Mr. Will want to take you and a friend to the Premiere!

Synopsis:
A high school girl is stuck reliving the day of her death for a week and must untangle the mystery to discover everything she’s in danger of losing, in indie darling Ry Russo-Young‘s (Orphans, Nobody Walks) adaption of the wildly popular novel Before I Fall.

Let us know your Instagram handle in the comments section on Facebook so we can verify! We’ll be checking!

The BEFORE I FALL Snapchat Filter looks like this… 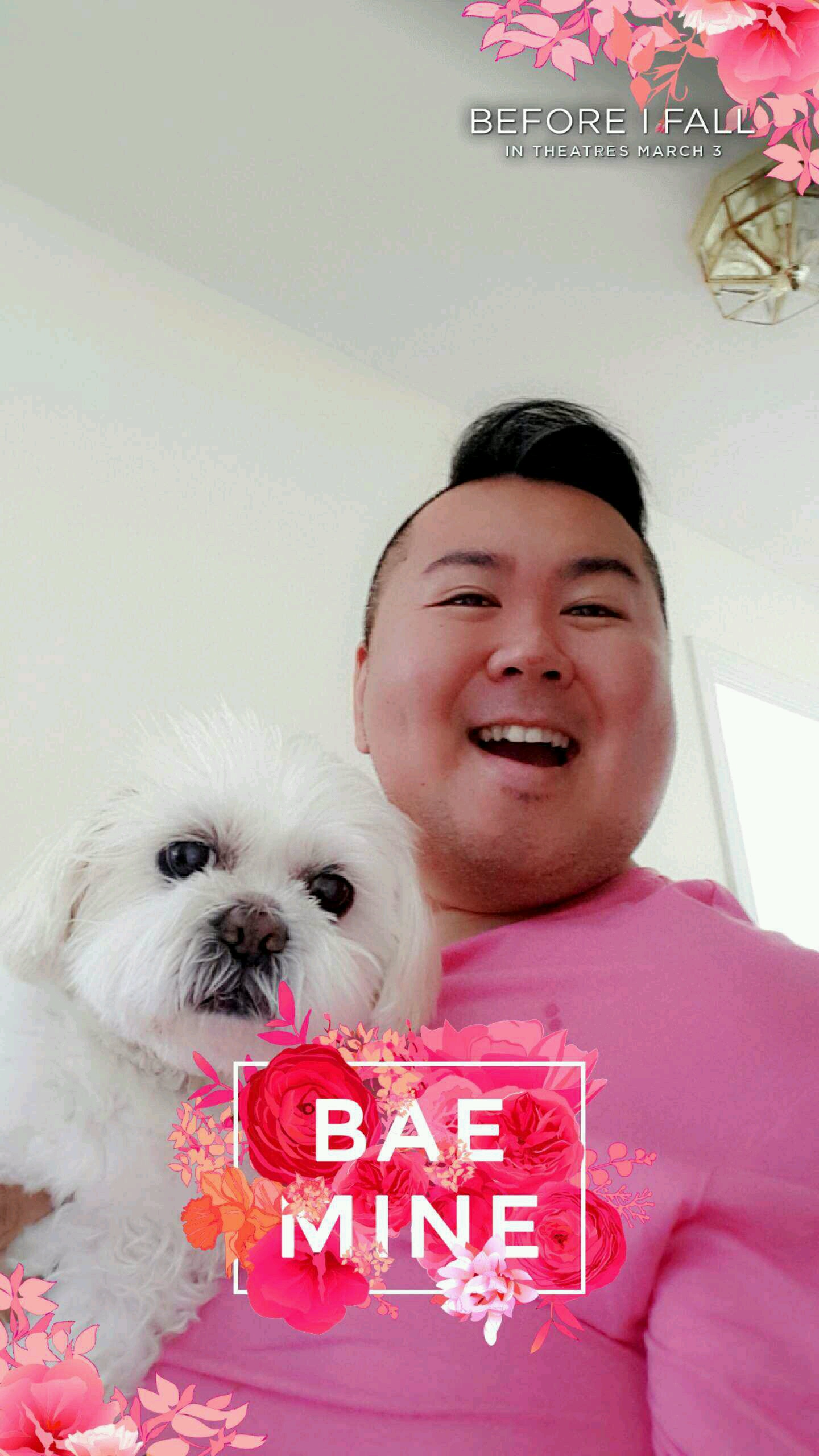 Don’t have Snapchat? Get it! Data usage applies according to your mobile provider rates and plans.

Before I Fall Zoey Deutch

#GIVEAWAY: ENTER TO WIN ADVANCE PASSES TO SEE “BEFORE I FALL”

Synopsis:
Sam seemed to have everything a teenage girl could want: popularity, a hot boyfriend, cool status, fun friends, loving family and seeming happiness. But beyond the superficial, Sam’s life wasn’t so charmed. She was one of a clique of high school mean girls who made life hellish for those different from them. When she’s killed in a car accident, Sam is forced to relive her last day on Earth seven times in order to get things right. She attempts to make sense of what befell her and gain a better understanding of herself and others. In the process Sam evolves, learns to be a good person and comes to accept her fate. As narrated by Sam (Zoey Deutsch), this touching story, based on the 2010 young adult novel by Lauren Oliver, has a Groundhog Day structure, with a dramatic arc.

Before I Fall Zoey Deutch

ENTEGIVEAWAY: ENTER TO WIN ADVANCE PASSES TO SEE “EVERYBODY WANTS SOME”

Paramount Pictures Canada + Mr. Will want to give Readers a chance to see the “spiritual sequel” to DAZED AND CONFUSED! Screenings for Richard Linklater’s EVERYBODY WANTS SOME, take place in Toronto, Ottawa + Montreal!

A “spiritual sequel” to Dazed and Confused set in the world of 1980 college life, Everybody Wants Some is a comedy that follows a group of friends as they navigate their way through the freedoms and responsibilities of unsupervised adulthood. Get ready for the best weekend ever.

Paramount Pictures Canada release EVERYBODY WANTS SOME on March 30, 2016 in Toronto, April 8, 2016 in Montreal/Vancouver and across Canada April 15, 2016.