This announcement couldn’t have been more timely with today’s inauguration! While we’re waiting on the return of our favourite series, here’s a quick teaser announcing the upcoming streaming date for the fifth season of HOUSE OF CARDS.

One nation. Underwood. House of Cards returns Tuesday, May 30, ,2017 on Netflix.

Is it horrible that we expected the worst seeing the first few seconds of this Season Four HOUSE OF CARDS Tease with Frank Underwood (Kevin Spacey) digging … presumably a grave?

In 24 years, British Columbia-born Actress Molly Parker has established herself somewhat of  a National Treasure.  Her work in Independent Films like Kissed and Center of the World brought her wide acclaim north and south of the Border. She would go on to garner recognition for her phenomenal work in TV Series like Deadwood, Dexter, The Firm and more recently, House of Cards.  Parker returns to Toronto for Canadian Stage‘s Production of HARPER REGAN, by Simon Stephens.

One Autumn evening, after learning of her Father’s impending death, Harper Regan walks away from her home, her Husband, her Daughter, and keeps going. She tells no one where she’s going or whether she’s coming back. She’s put everything she’s ever worked for at risk. Her journey takes her to the very borderlines of the relationship between eros and thanatos, sex and death.

We had the pleasure of chatting with Parker just before she prepped for a day of rehearsal. Bluma Appel Theatre will host for the first time ever in Canada a Play by Stephens. “It’s definitely not a return to the stage for me”, says the Actress whose piercing blue eyes both are expressive and pensive.  It may have been over 18 years since she’s appeared on-stage, but she considers herself more a TV Actress now by way of a whopping 40 Indie Films made over a span of ten years.

I ask Parker what drew her most to Harper Regan.  “She’s a Woman torn between Family and herself, a Wife and a Mother”, she tells me.  “She’s left as Provider for her Family after some trauma takes place.  With her Father dying, she can’t leave her job without losing her job.  She goes anyway, even though her Father dies before she gets there.”.  “Harper meets some odd people whom affect her.  It really is about a lost weekend or a mini-Odyssean journey in some way. She’s an average, unremarkable Woman – every Woman in a way.  She does something extraordinary and it’s the extraordinary actions of ordinary people that has me interested.”.  Parker adds that although she is clear what is required to become Harper, there is something still so mysterious about her. “I really don’t know who she is.”. “The Play is funny, sweet, moving and so well-written.  It operates on a deeper level that had me thinking for days”, she comments. “Hopefully we can make a version of that.”.

On some of her more complex and unconventional career choices, she is full of gratitude for the opportunities she’s been given. “I know I’ve been really lucky to be offered really challenging roles”, admits Parker. “I’m attracted a little bit to roles that are scary to me, however, it is easy to  look back now and say ‘I understand what I was doing back then’, when at time I only knew what I liked and didn’t like.”.

The more I chat with Parker, watching her dig deep with reflective , thoughtful pauses, the more I realize why it is that her career continues to thrive – she lives and breathes pure artistry. “I don’t care about being likable and I’m not in it to be liked”, she reveals.  “I myself want to be presented with somebody who speaks to my Humanity. I want to be entertained and come away feeling ‘Oh, that is a Woman I’d be interested in talking to. That is more interesting to me.”.

I couldn’t let our Chat end without asking about the greatest Television Series currently in existence.  “I love doing House of Cards“, she tells me. “It’s like all the elements are great. The writing is terrific and challenging. We have the best Crew and  I love that Character (Jacqueline Sharp). She is this combination – she’s strong, a warrior, sexual, ambitious, ruthless, afraid and vulnerable.”. Although she is tight-lipped about any more details of upcoming Season Three, she did indicate she is drawn much to a new male Character.  “In many ways, this Show is about a marriage and this Season continues to explore it in-depth.”.

Always a pleasure seeing the incredibly-smart, intense and talented #MollyParker. “I don’t care about being liked”, she tells me. More in my upcoming piece on #HarperRegan, playing at #BerkeleyStreetTheatre 3/5. We also talked #HouseofCards and she gave ONE tease. #Theatre

The countdown really has been on for quite some time, but here’s a little something to tie us over till Season Three of HOUSE OF CARDS streams!

See the brand-new Poster of Frank & Claire Underwood owning that Tarmac like a Red Carpet: 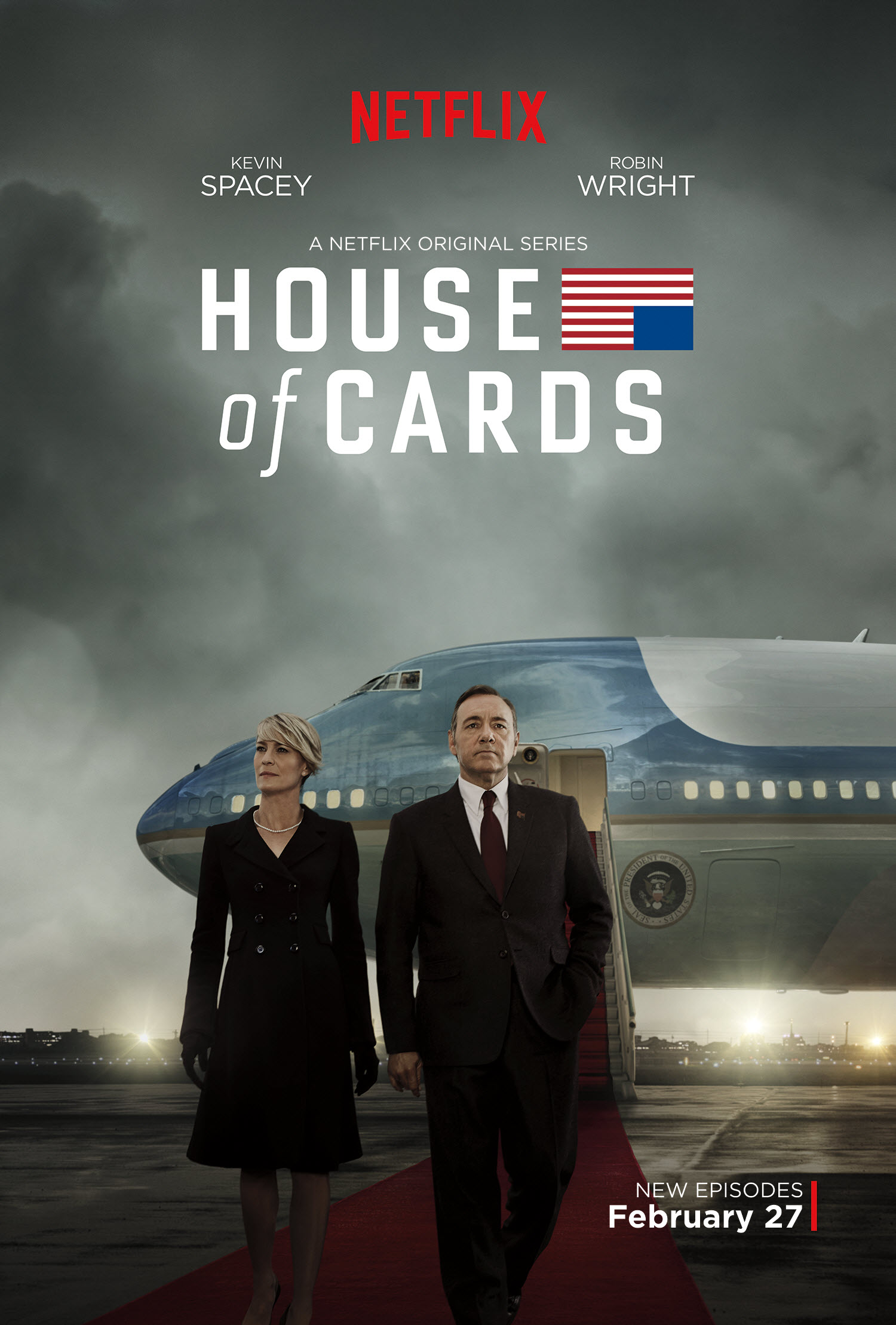 I cannot handle the intensity! Hot off Kevin Spacey’s Best Actor in a TV Series, Drama win at the Golden Globes, the new Season 3 Trailer for Netflix‘s HOUSE OF CARDS has just surfaced and we have only one question after seeing it. Is it February 27th yet?