Two new exciting star-studded Netflix Original Films to tell you about which will see a theatrical release and also be streamed right to your homes!

THE HIGHWAYMEN
The outlaws made headlines. The lawmen made history. From Director John Lee Hancock (The Blind Side), The Highwaymen follows the untold true story of the legendary detectives who brought down Bonnie and Clyde. When the full force of the FBI and the latest forensic technology aren’t enough to capture the nation’s most notorious criminals, two former Texas Rangers Frank Hammer (Kevin Costner) and Maney Gault (Woody Harrelson) must rely on their gut instincts and old school skills to get the job done.

TRIPLE FRONTIER
A group of former Special Forces operatives (Ben Affleck, Oscar Isaac, Charlie Hunnam, Garrett Hedlund and Pedro Pascal) reunite to plan a heist in a sparsely populated multi-border zone of South America. For the first time in their prestigious careers these unsung heroes undertake this dangerous mission for self instead of country. But when events take an unexpected turn and threaten to spiral out of control, their skills, their loyalties and their morals are pushed to a breaking point in an epic battle for survival. Directed by Academy Award® nominee J.C. Chandor (Margin Call, All Is Lost, A Most Violent Year) and co-written by Chandor and Academy Award® winner Mark Boal (The Hurt Locker, Zero Dark Thirty).

Official Synopsis:
Academy Award® winner Angelina Jolie directs and produces Unbroken, an epic drama that follows the incredible life of Olympian and war hero Louis “Louie” Zamperini (Jack O’Connell) who, along with two other crewmen, survived in a raft for 47 days after a near-fatal plane crash in WWII—only to be caught by the Japanese Navy and sent to a prisoner-of-war camp.

Starring alongside O’Connell are Domhnall Gleeson and Finn Wittrock as Phil and Mac—the airmen with whom Zamperini endured perilous weeks adrift in the open Pacific—Garrett Hedlund and John Magaro as fellow POWs who find an unexpected camaraderie during their internment, Alex Russell as Zamperini‘s brother, Pete, and in his English-language feature debut, Japanese actor Miyavi as the brutal camp guard known only to the men as “The Bird.”

http://www.mrwillwong.com/unbroken @MRWILLW wants us to #win Passes to see #IAMUNBROKEN by #AngelinaJolie. In theatres Christmas Day.

If you have a moment, please also check-out the #IAMUNBROKEN Project where you are encouraged to share your own stories of overcoming adversity just like Louis Zamperini himself:

Already gaining serious Oscars Buzz especially in the acting categories, The Coen Brothers’ Inside Llewyn Davis is nearing a release. The Drama is a close look at New York City’s Folk Music Scene in the ’60s through the eyes of a young Singer and it stars Carey Mulligan, Oscar Isaac, Garrett Hedlund, John Goodman and Justin Timberlake.

See the Canadian HD Trailer below:

#TIFF12: GARRETT HEDLUND AT “ON THE ROAD” PREMIERE 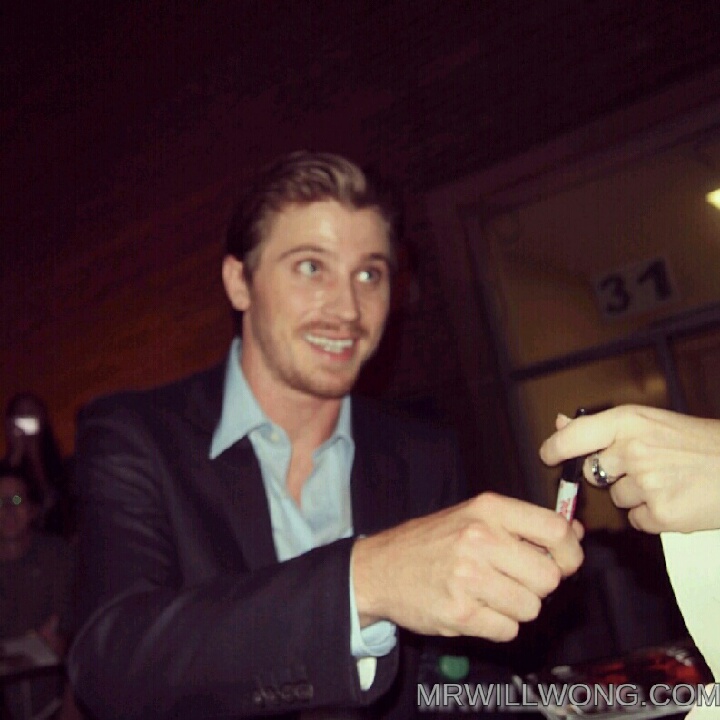 Many of you might remember him from Disney‘s TRON 3D.  Garrett Hedlund arrived in Toronto earlier today along with Kirsten Dunst, to promote their latest Film, On the Road.  Drawing a huge crowd together with Twilight Star Kristen Stewart, Hedlund was spotted at a Private Cast Dinner at George, before returning back to Ryerson Theatre for a much-delayed Q&A together with Director Walter Salles and his Cast Mates.

I was so close to getting a Photo with him, before he was rushed-off!