A group of vapid rich people and Social Media influencers go on an ill-fated cruise. This is Ruben Östlund‘s second Palme d’Or winner in a row, and all the things that make his work captivating are on full display: dynamic and inventive blocking, an absolutely lavish production, laugh-out-loud moments of excess, and an ensemble of grounded yet deliciously absurd performances across the board.

Unfortunately, his limitations as a Writer are also particularly sharp here. The dominant themes of rich and poor, skilled and inept, culture assigning value to those least deserving, and absolute power corrupting you know what… they’re all rather tired, which would be easier to swallow if the Movie wasn’t an hour longer than it should be.

Structurally, there are a number of odd choices–our presumably lead characters are introduced and fleshed out for the First Act, then basically forgotten for the pivotal middle section. Arguably, the most interesting character of the Film is kept out of the narrative until near the end, and while I understand Östlund might be making a statement by hiding them, it comes at the expense of what could have been a far richer story of personal transformation. He has a habit of leaving the most potentially interesting moments of character development off-camera.

While there is a lot to be enjoyed here–and I would still consider Triangle worthy of your attention–be aware that this lengthy journey out to sea is a shallow one.

TRIANGLE OF SADNESS screens as follows at TIFF ’22:

Bobby Farrelly is back with CHAMPIONS (There’s Something About Mary, Me, Myself & Irene) and a release date has been set for March 24, 2023 via Focus Features and Universal Pictures Canada.

In CHAMPIONS, Harrelson stars in the hilarious and heartwarming story of a former minor-league basketball coach who, after a series of missteps, is ordered by the court to manage a team of players with intellectual disabilities. He soon realizes that despite his doubts, together, this team can go further than they ever imagined.

In CHAMPIONS, Harrelson stars in the hilarious and heartwarming story of a former minor-league basketball coach who, after a series of missteps, is ordered by the court to manage a team of players with intellectual disabilities. He soon realizes that despite his doubts, together, this team can go further than they ever imagined.

#FIRSTLOOK: NEW TRAILER FOR “THE MAN FROM TORONTO” Filmed right here in our City, here’s a new look at THE MAN FROM TORONTO which now will arrive on Netflix!

Logline:
A case of mistaken identity arises after a screw-up sales consultant and the world’s deadliest assassin—known only as The Man from Toronto— run into each other at a holiday rental.

The Man from Toronto woody harrelson

Fashion Model-Celebrity couple Carl (Harris Dickinson) and Yaya (Charlbi Dean) are having problems…money problems. The main issue is that they have too much of it, which causes issues when it comes to bill time. The truth is, Yaya makes more than Carl but she’ll never pay. While in this rut in their relationship, Yaya’s influencer status gets them a free trip on a yacht. It’s there they meet their fellow uber-wealthy, upper-class, white privileged passengers. However, when they hit a stormy, turbulent night these rich elite are left stranded on an island.

Writer-Director Ruben Östlund’s latest is a biting, hilarious Satire on the privileged. He does this in three parts. The first is entirely focused on Carl and Yaya. As the bill sits on their table, Yaya becomes engrossed in her phone until Carl offers to pay. This results in one of the longest fights over money on-screen. Östlund, with the help of the brilliant Dickinson and Dean, creates an engrossing argument on Feminism and currency. It’s a hilarious section in this smart Film that sets the theme of money and hierarchy. Additionally, it shows a different side to Dickinson that allows him to show off his comedic side, which he excels at.

Once we arrive in the second part, we are introduced to a range of characters. Such as an elderly couple who sells grenades and Russian fertilizer magnate Dimitriy (played by the incomparable Zlatko Buric). It’s in this section that the majority of the hysterical moments happen. The things these characters say to each other and the staff on board (which resemble those from the Reality Show Below Deck) are shocking. It’s in this section that Östlund’s themes come through.

He touches on the privilege that comes along with having wealth in comparison to those who work on the yacht. The edits show the jarring difference in the lives of the passengers and employees. Triangle of Sadness through and through is a riot, however, there is one segment that remains a standout.

It takes place between the Captain (Woody Harrelson), a drunk who spends a lot of time in his cabin, and Dimitriy. As the yacht rocks during the Captain’s dinner and passengers are projectile vomiting everywhere (yes, there are some serious, although uproarious scenes in this second part) the two exchange quotes. Captain spews Socialism quotes while Dimitriy is an advocate for Capitalism. Harrelson and Buric are outrageously funny. Could easily watch them as these characters for days on end.

The Final Act of Östlund’s unmissable Satire has the rich stranded and incapable of providing the necessities to survive. Remember, they pay people to take care of them. But lucky, or unlucky, for them there is one capable crew member who survived — Abigail (Dolly De Leon). Onboard she was the cleaning manager but on this island, she becomes the boss. It’s a perfect way to sum up all of Östlund’s themes. Having the upper-class succumb to someone they believe is below them. De Leon not only runs the island, but she steals the entire third act and runs away with it.

Triangle of Sadness is unforgettable, nailing every beat and then some. The Ensemble Cast has impeccable comedic timing. This is not to be missed.

Triangle of Sadness screens at Cannes ’22:

#FIRSTLOOK: NEW POSTER FOR “VENOM: LET THERE BE CARNAGE”

Despite a few shifts in release date, VENOM: LET THERE BE CARNAGE comes at us with a new Poster!

Tom Hardy returns to the big screen as the lethal protector Venom, one of MARVEL’s greatest and most complex characters. Directed by Andy Serkis, the film also stars Michelle Williams, Naomie Harris and Woody Harrelson, in the role of the villain Cletus Kasady/Carnage.

In case you’ve missed the Trailer, see it below:

Mary Elizabeth Winstead is back in KATE, coming this Fall to select theatres and on Netflix!

About Kate:
Meticulous and preternaturally skilled, Kate is the perfect specimen of a finely tuned assassin at the height of her game. But when she uncharacteristically blows an assignment targeting a member of the yakuza in Tokyo, she quickly discovers she’s been poisoned, a brutally slow execution that gives her less than 24 hours to exact revenge on her killers. As her body swiftly deteriorates, Kate forms an unlikely bond with the teenage daughter of one of her past victims. Starring Mary Elizabeth Winstead and Woody Harrelson, and directed by Cedric Nicolas-Troyan, Kate follows a burned assassin’s furious pursuit of one last self-appointed job.

KATE arrives in select theatres and on Netflix September 10, 2021.

Synopsis:
MIDWAY centers on the Battle of Midway, a clash between the American fleet and the Imperial Japanese Navy which marked a pivotal turning point in the Pacific Theater during WWII. The film, based on the real-life events of this heroic feat, tells the story of the leaders and soldiers who used their instincts, fortitude and bravery to overcome the odds.

Two new exciting star-studded Netflix Original Films to tell you about which will see a theatrical release and also be streamed right to your homes!

THE HIGHWAYMEN
The outlaws made headlines. The lawmen made history. From Director John Lee Hancock (The Blind Side), The Highwaymen follows the untold true story of the legendary detectives who brought down Bonnie and Clyde. When the full force of the FBI and the latest forensic technology aren’t enough to capture the nation’s most notorious criminals, two former Texas Rangers Frank Hammer (Kevin Costner) and Maney Gault (Woody Harrelson) must rely on their gut instincts and old school skills to get the job done.

TRIPLE FRONTIER
A group of former Special Forces operatives (Ben Affleck, Oscar Isaac, Charlie Hunnam, Garrett Hedlund and Pedro Pascal) reunite to plan a heist in a sparsely populated multi-border zone of South America. For the first time in their prestigious careers these unsung heroes undertake this dangerous mission for self instead of country. But when events take an unexpected turn and threaten to spiral out of control, their skills, their loyalties and their morals are pushed to a breaking point in an epic battle for survival. Directed by Academy Award® nominee J.C. Chandor (Margin Call, All Is Lost, A Most Violent Year) and co-written by Chandor and Academy Award® winner Mark Boal (The Hurt Locker, Zero Dark Thirty). 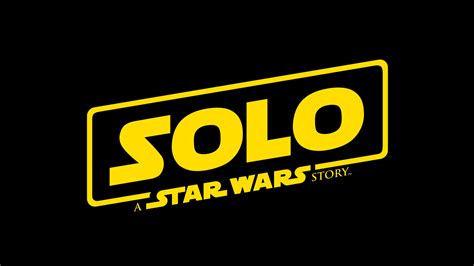 New Character Posters have just been released to get us pumped for SOLO: A STAR WARS STORY! Check ’em out!

Synopsis:
Board the Millennium Falcon and journey to a galaxy far, far away in “Solo: A Star Wars Story,” an all-new adventure with the most beloved scoundrel in the galaxy. Through a series of daring escapades deep within a dark and dangerous criminal underworld, Han Solo befriends his mighty future copilot Chewbacca and meets the notorious gambler Lando Calrissian, in a journey that will set the course of one of the Star Wars saga’s most unlikely heroes. 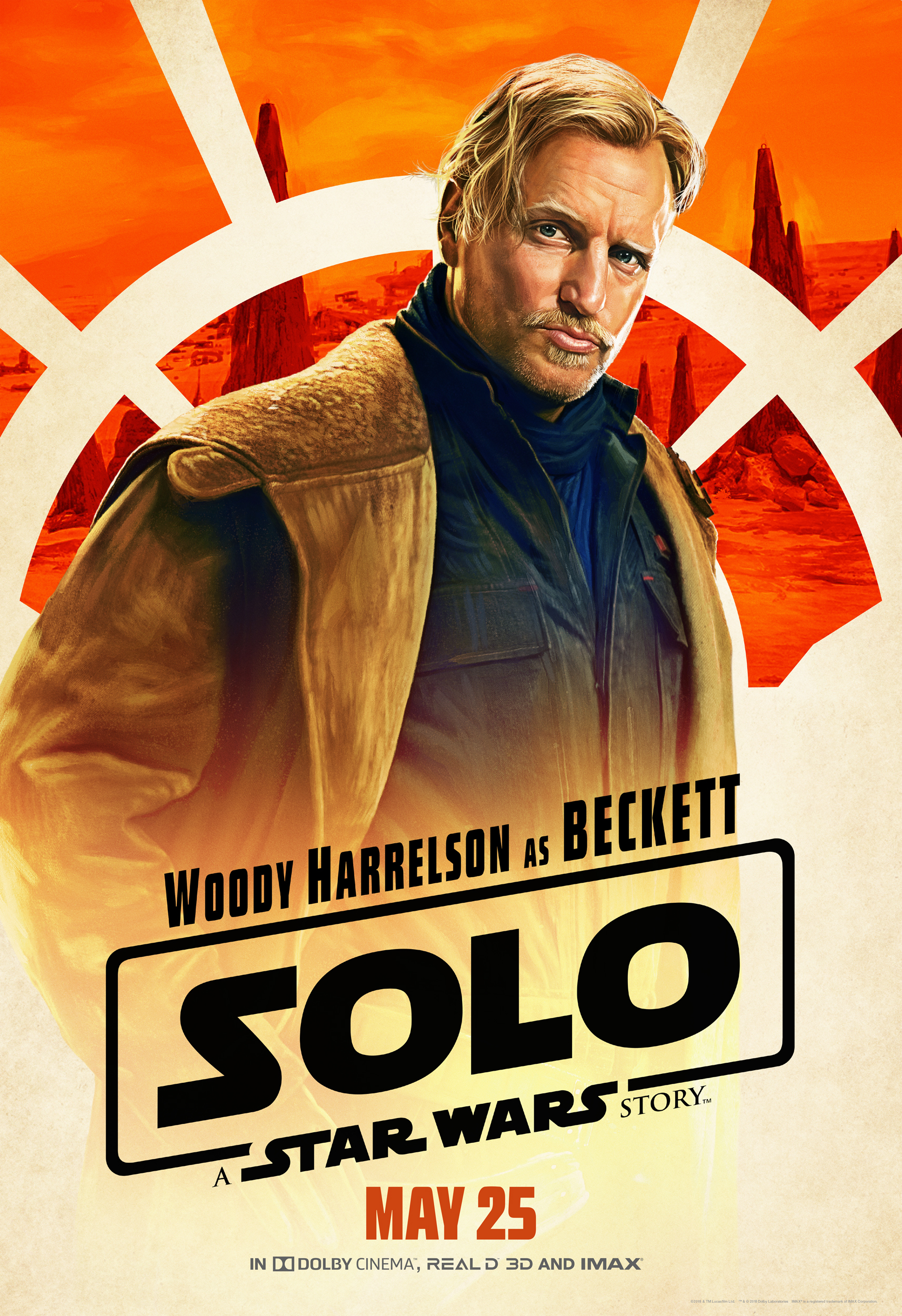 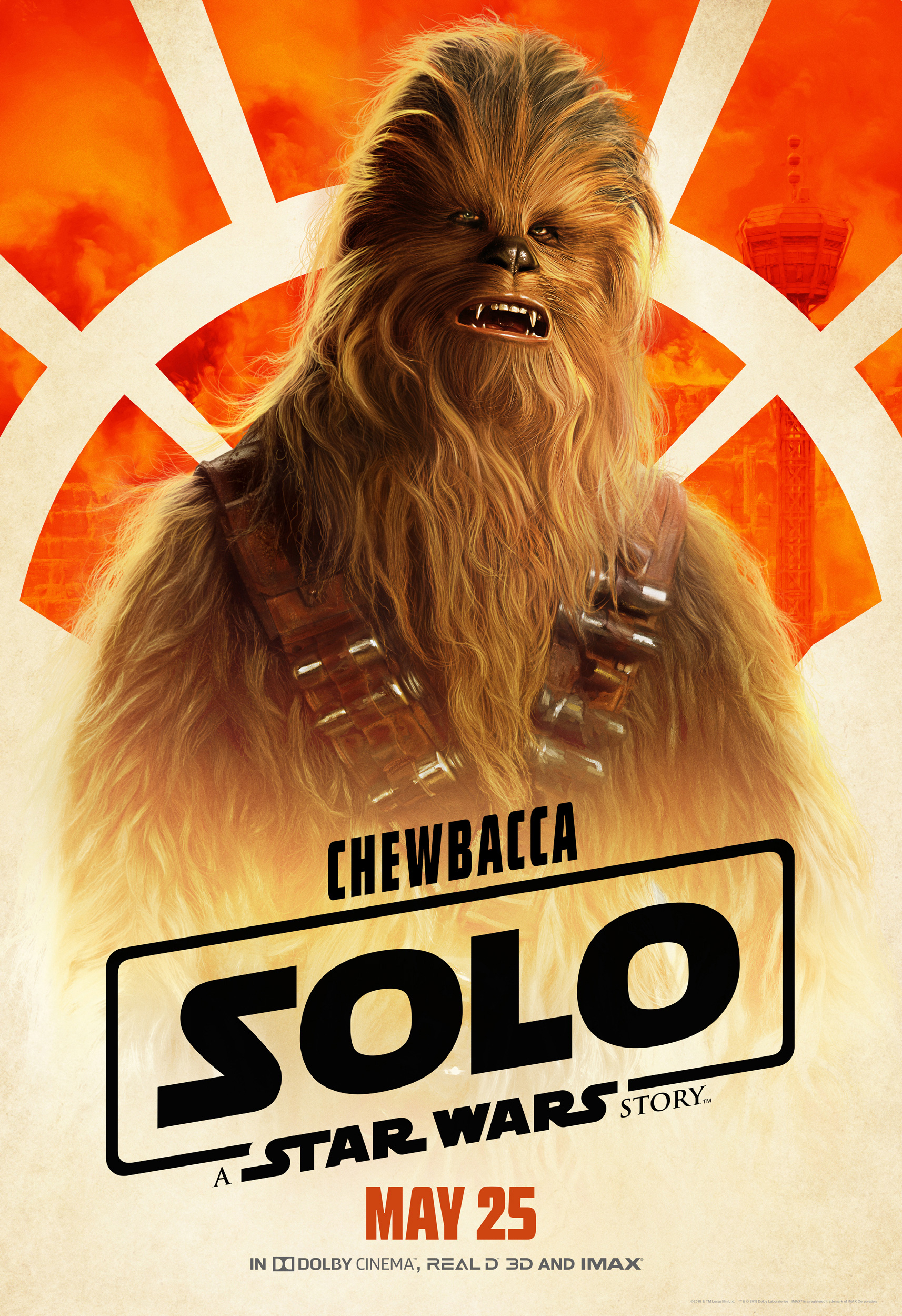 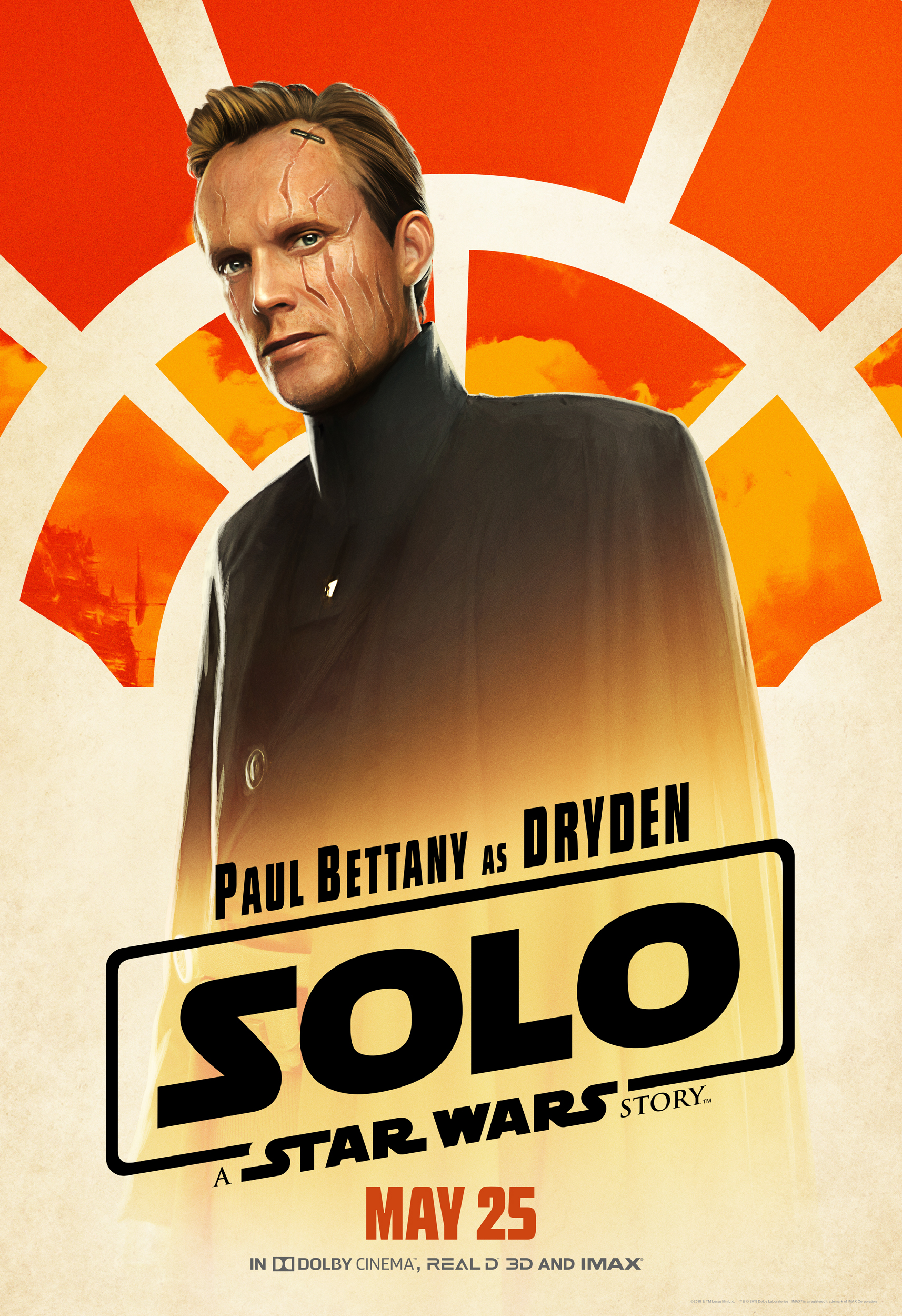 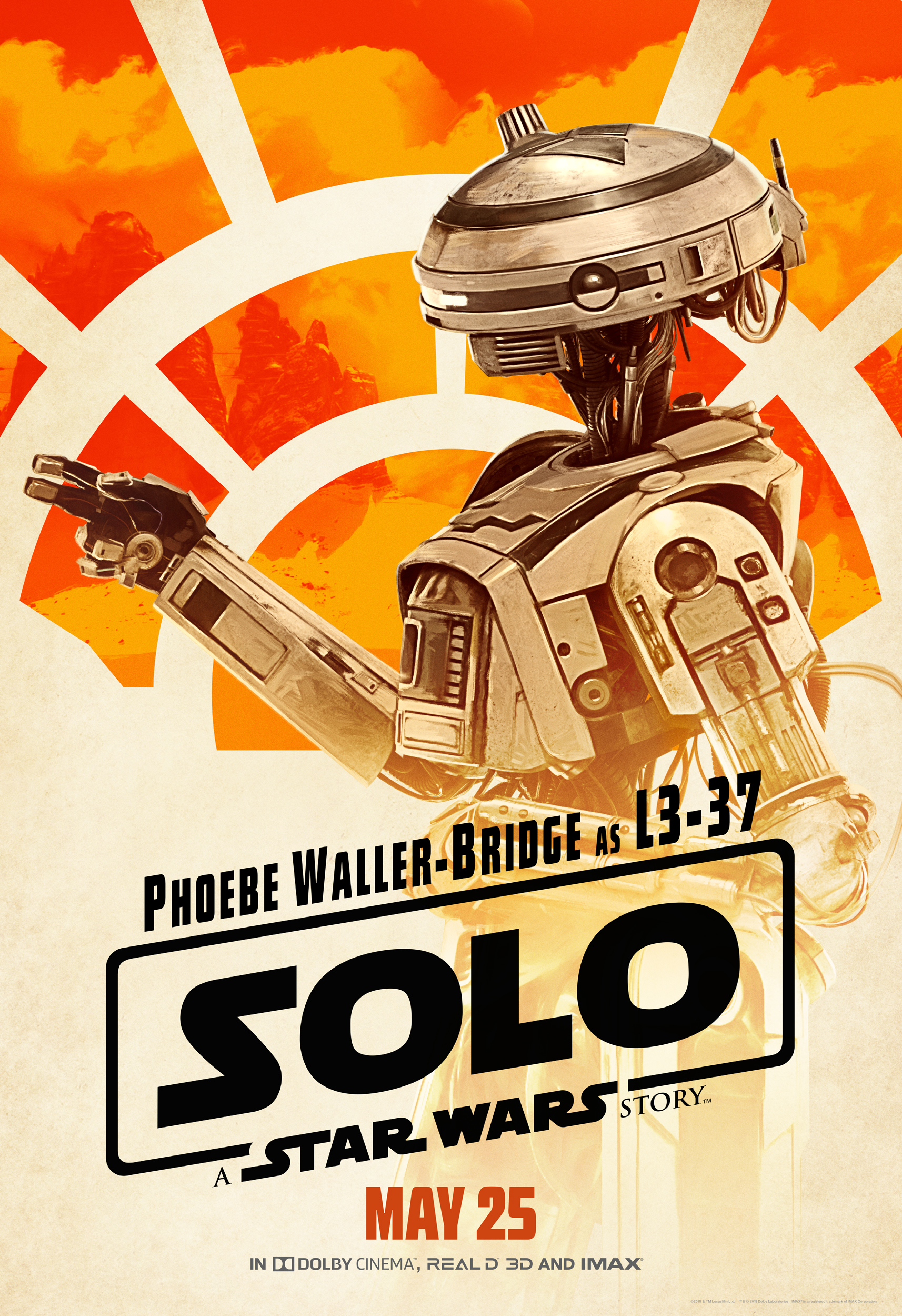 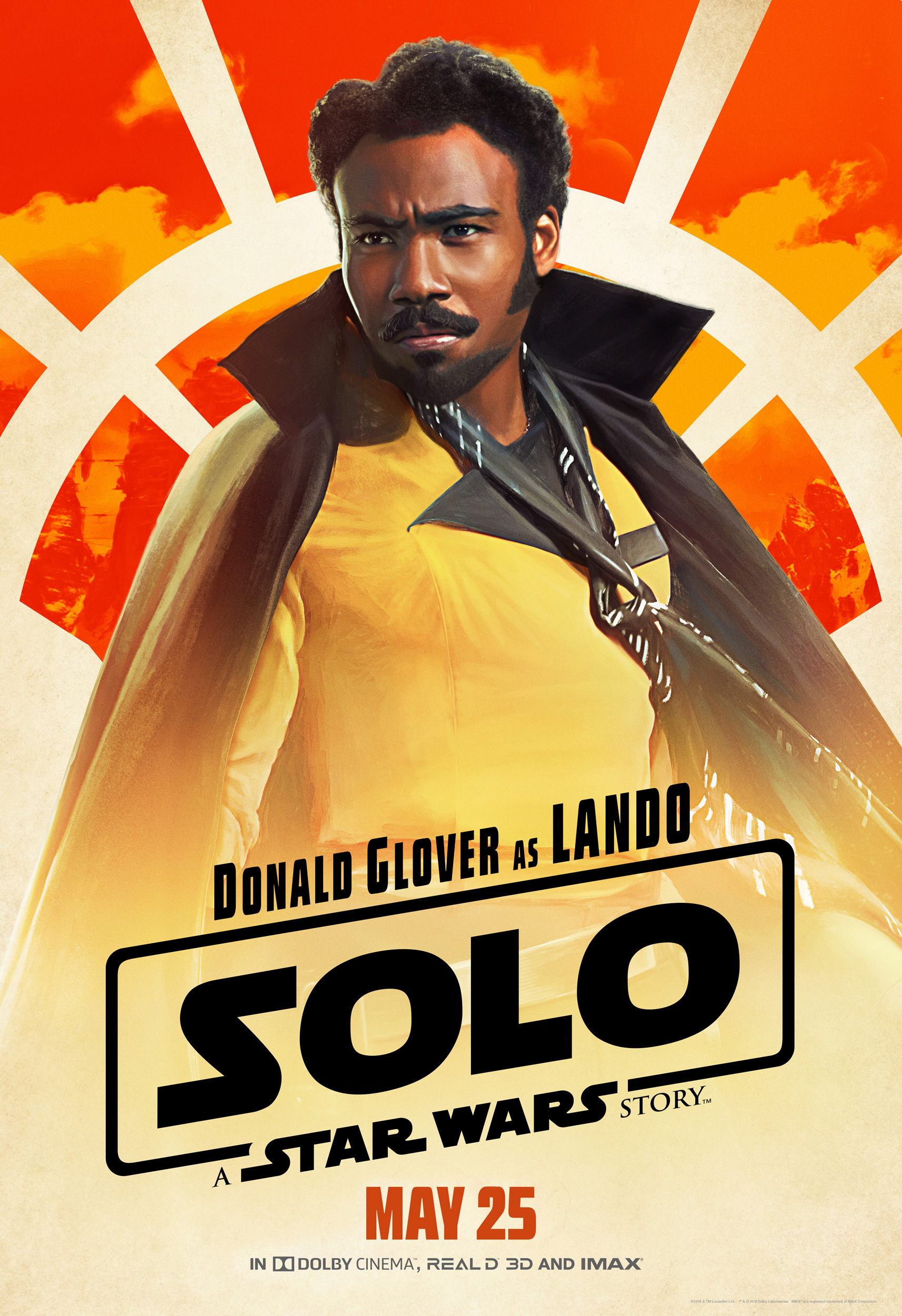 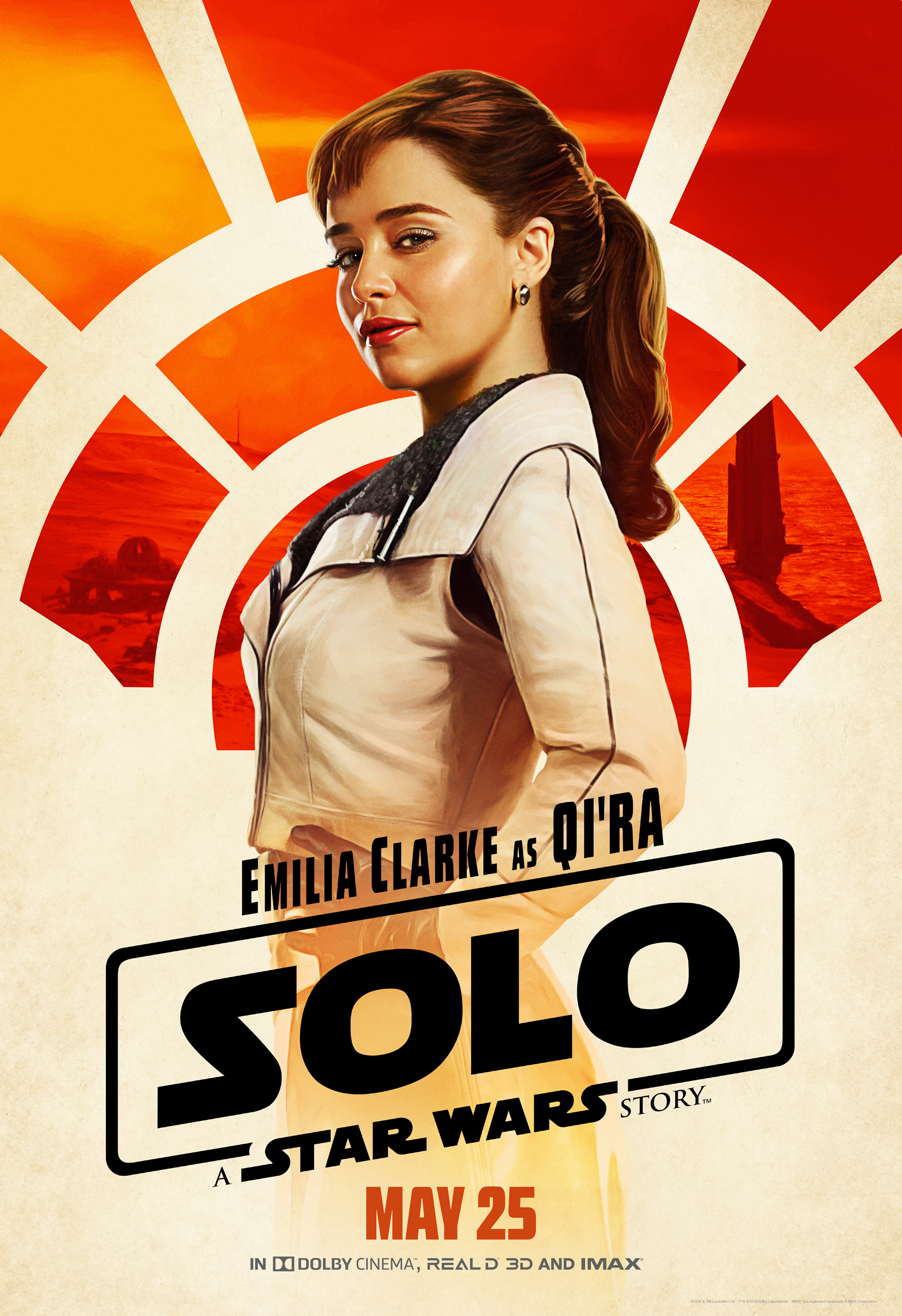 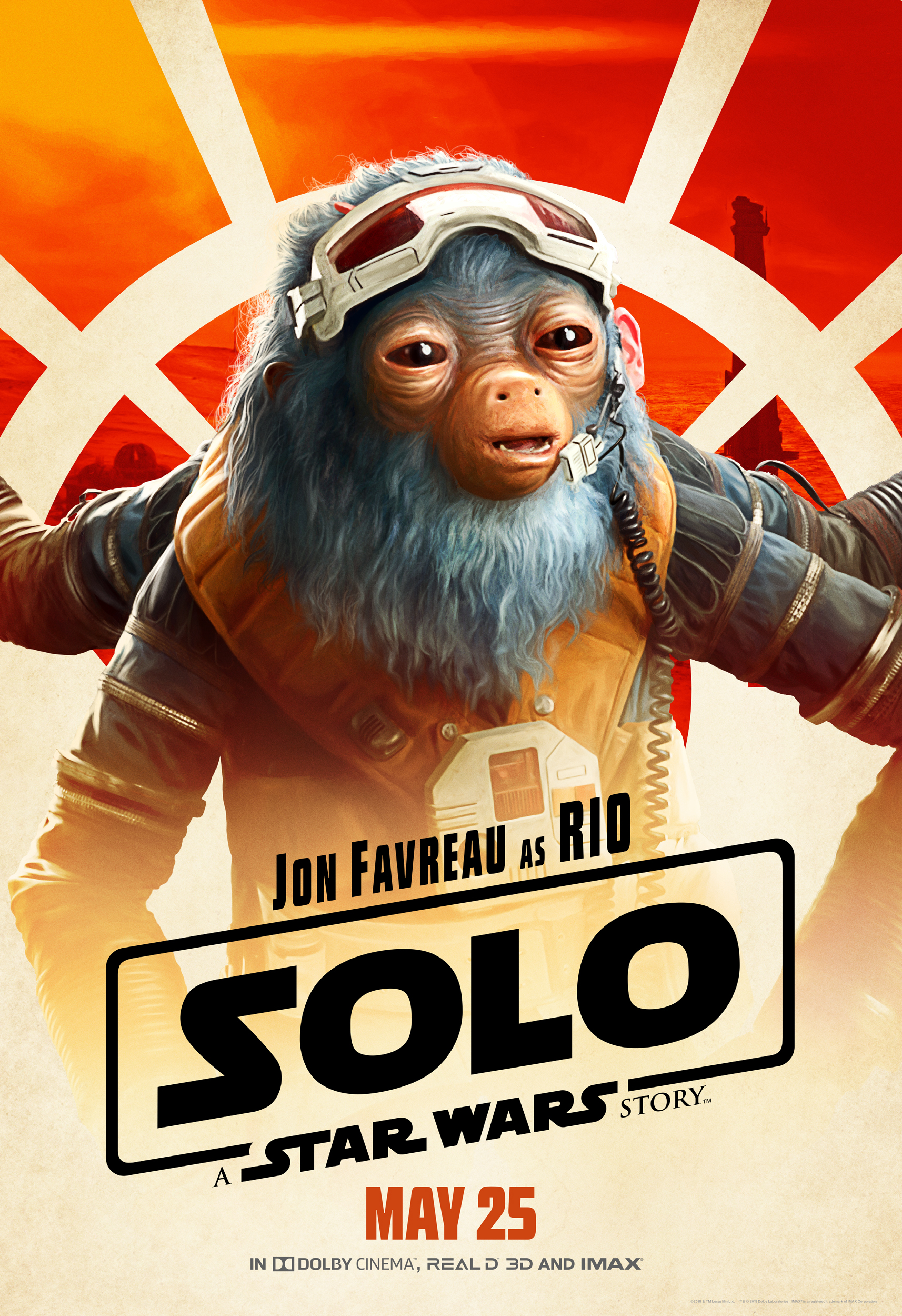 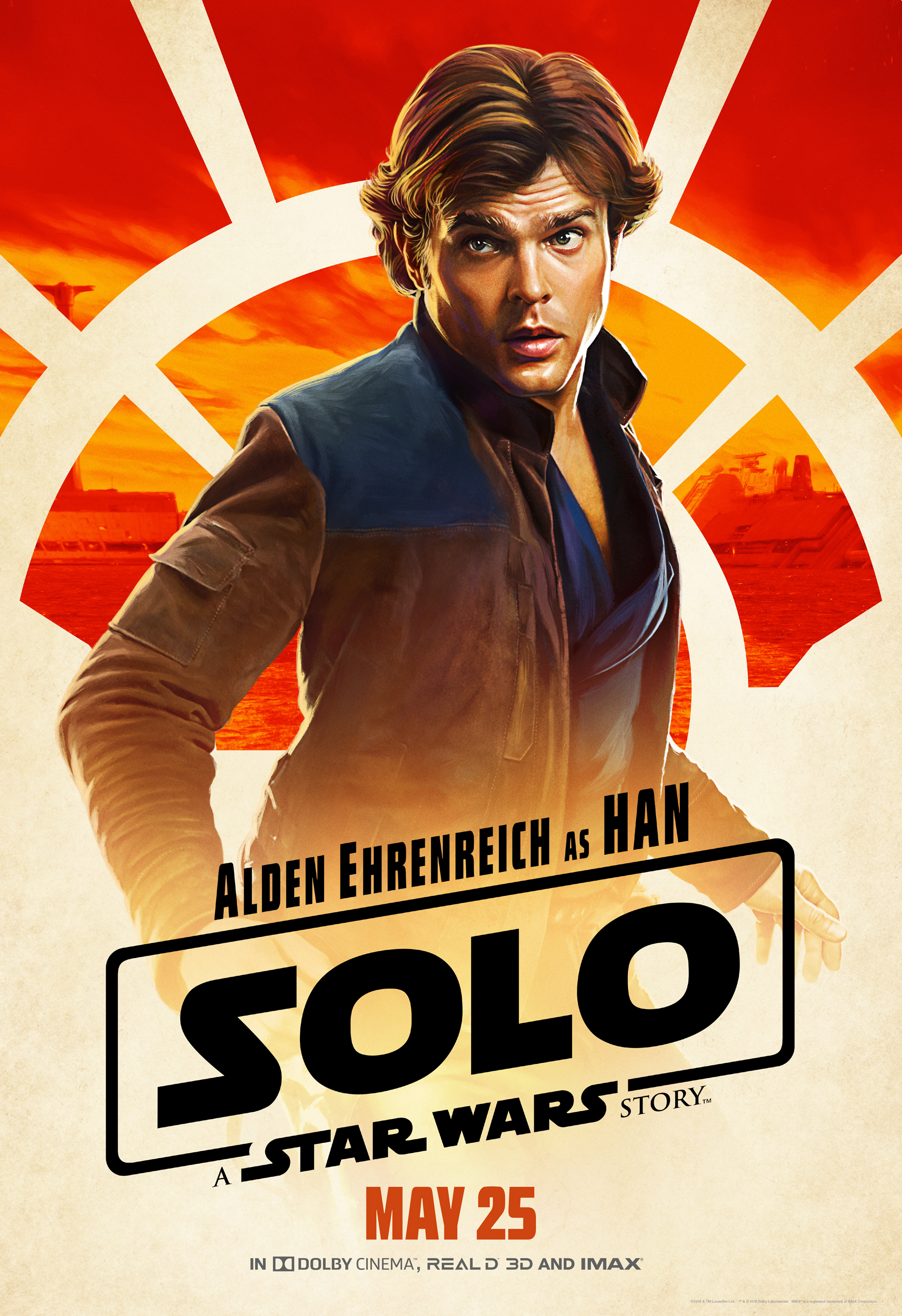 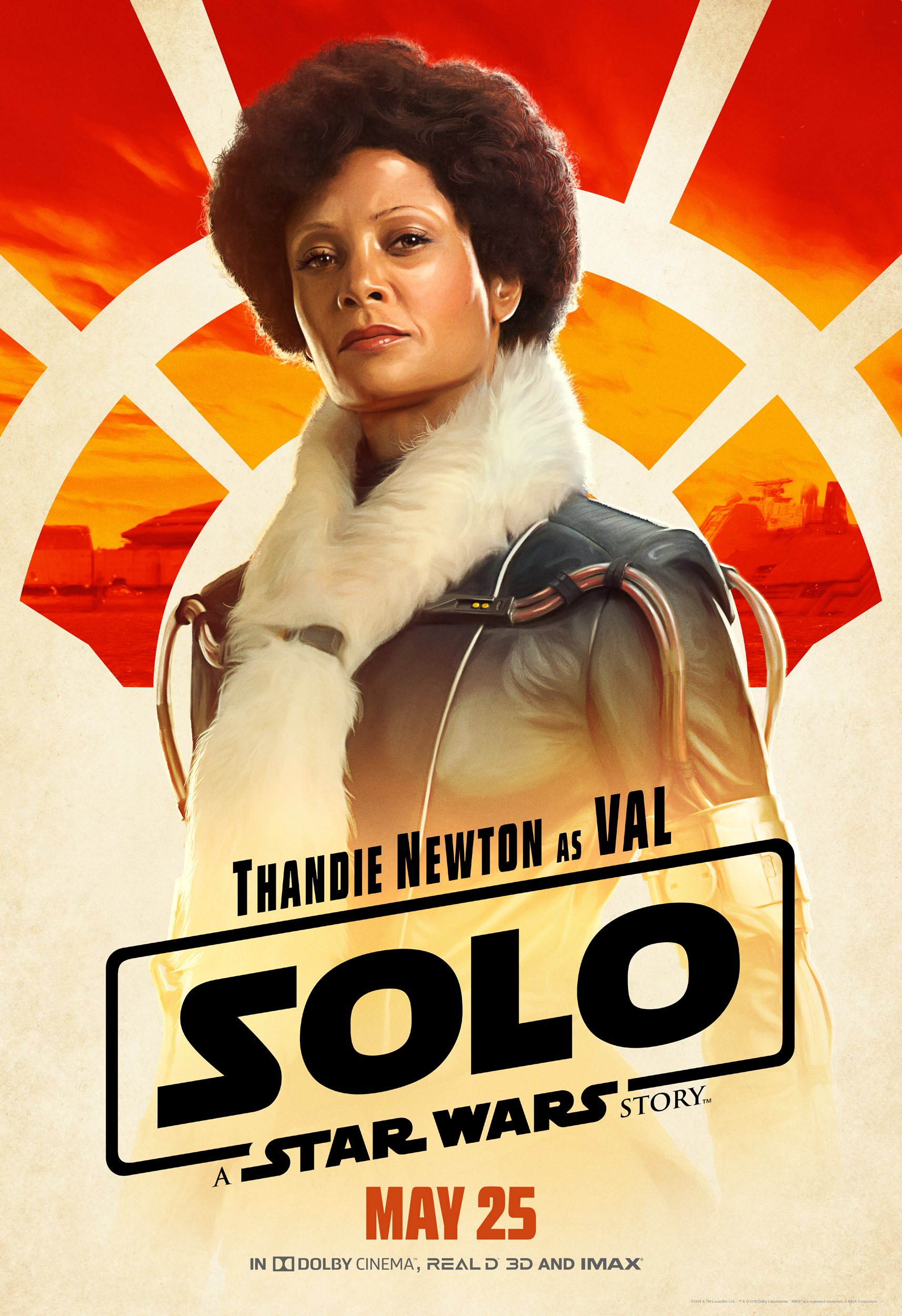