The 19th Annual Screen Actors Guild Awards were held tonight at The Shrine in Los Angeles, as one of the final major Awards Ceremonies leading up to next month’s Oscars.  The Awards, which allow Actors to honour their v. own, recognize both Film and Television Performers.  As is the case with the SAG Awards, what makes it unique is that their is now Best Picture Award as the Ceremony honours performances strictly.  This year, Dick Van Dyke was the honourary Recipient of the Lifetime Achievement Award.

Winning top honours tonight was Argo for Outstanding Performance by a Cast in a Motion Picture, which is making it seem increasingly likely as a real Best Picture Candidate at the Oscars, considering its Motion Picture – Drama win at the Golden Globes a couple weeks back.  Actor/Director Ben Affleck, who was a noticeable omission from the Directing Category at the Oscars, delivered a heartfelt and funny Speech, remembering to thank Wife Jennifer Garner: “I wanna thank my Wife, who I love, and my Kids, and Warner Brothers, who I love, but not as much.”.  The Ensemble Cast from Argo includes: Clea Duvall, Bryan Cranston, John Goodman, Alan Arkin, Victor Garber, Scoot McNairy, Kerry Bishé, Tate Donovan and more.

Lincoln also continues to be a major presence this Awards Season with Daniel Day-Lewis solidifying his case for Best Actor at the Oscars with a win  for Outstanding Performance by an Actor in a Motion Picture.  This counts as his third win at the Awards, after previously having won in 2003 and 2008 for Gangs of New York and There Will Be Blood. In what was a competitive Category, Tommy Lee Jones too was awarded Supporting Actor, Film for his work in Lincoln too after having been defeated by Christoph Waltz a couple weeks ago at the Golden Globes.

Jennifer Lawrence, who despite recovering from Pneumonia still ventured-out in her Dior Couture (same label as her Golden Globes Dress), pulled-off a surprise upset over an Alexander McQueen-clad Jessica Chastain, with her spirited work in Silver Linings Playbook.  While accepting the Award, even Katniss herself couldn’t avoid a slight Wardrobe Malfunction with her dress appearing to tear at the knees, although it was later confirmed via Dior that in fact this was part of the design.

Meanwhile,  Anne Hathaway won Supporting Actress, Film for her stunning performance in Les Misérables, her first ever SAG Award and just one of many won of late.  The Actress stunned in Giambattista Valli Haute Couture, daring in a black Dress which drew some parallels to her scandal-inducing Tom Ford Dress worn at the New York City Premiere for the Film in December.

For Television Movie or Miniseries, both Film Veterans Kevin Costner and Juliane Moore were victorious for their work in History’s Hatfields and McCoys and HBO‘s Game Change respectively.  Claire Danes also continues her domination this Awards Season, winning for her work on Showtime‘s Homeland for Actress, Television Series, Drama, while  Cranston won Actor Award, Television Series, Drama  for AMC’s Breaking Bad (making him a double-Winner also for Argo), beating-out Danes’ Co-Star Damian Lewis who won at the Golden Globes.

Toronto Viewers tonight were inconvenienced by technical glitches, delaying the broadcast of the SAG Awards on Global Television. Finally at approximately 9:00 PM the issue was resolved, but not without   Torontonians first being so outraged that they took to Twitter to vent so much that the Station trended.  Bad Publicity can be good too perhaps.

Read Global Television‘s Tweets about the glitches below: 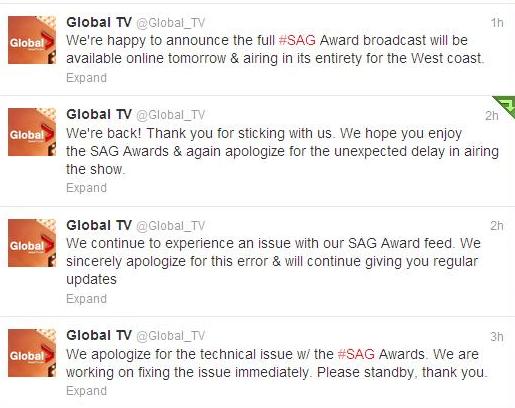 See some of the best looks from the SAG Awards tonight including  my favourite, Chastain and Seyfried in Zac Posen: 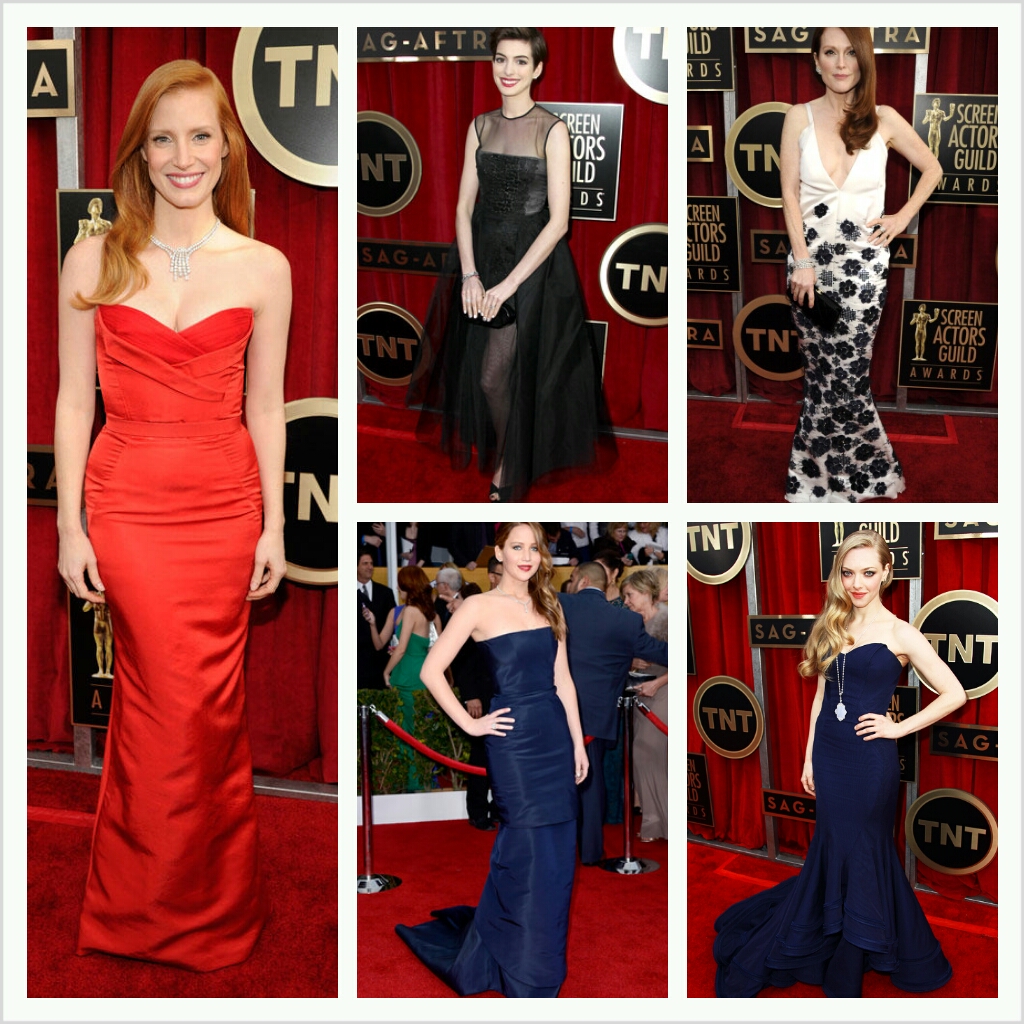