After.premiering at Cannes earlier this year, James Gray‘s ARMAGEDDON TIME is set for a release this Fall.

From acclaimed filmmaker James Gray, ARMAGEDDON TIME is a deeply personal story on the strength of family, the complexity of friendship and the generational pursuit of the American Dream. The film features an all-star cast including Anthony Hopkins, Anne Hathaway and Jeremy Strong.

After raves in Cannes, James Gray’s ARMAGEDDON TIME now has a release date! The Film starring Jeremy Strong and Anne Hathaway is in theatres October 28, 2022 via Universal Pictures Canada and Focus Features. Thinking we might see this on the Festival circuit in Toronto?

Synopsis:
From acclaimed filmmaker James Gray, ARMAGEDDON TIME is a deeply personal coming-of-age story about the strength of family and the generational pursuit of the American Dream.

Writer-Director James Gray’s latest is a semi-autobiographical story of a boy coming-of-age in New York during the ’80s. It follows Paul Graff (Banks Repeta) a sixth-grader in the early stages of rebellion who aspires to be an Artist. He befriends Johnny (Jaylin Webb), a black student who is constantly and unfairly being targeted by their teacher. When the two find themselves in trouble, Paul’s parents (Anne Hathaway and Jeremy Strong) refuse to let him see Johnny and subsequently move him to Private School. But will that be enough to separate their friendship?

Considering this is Gray’s most personal story, it doesn’t become self-important. Instead, he uses his childhood to touch on themes of racism and classism set against the rise of the Reagan era. Gray highlights inequity and Racism in institutions by showing how the public school Paul and Johnny attend mistreat Johnny. When Paul is the one doing something wrong, their teacher blames Johnny. Webb gives a powerful performance as a child who sadly understands that the world is stacked against him.

The Racism and Classism are further highlighted when Paul is sent to Private School. The family who funds the school is the Trump family, they even have Maryanne Trump (a delightful cameo from Jessica Chastain) come in to speak to them at an assembly. The students at the school use racial slurs and no one bats an eye. It’s a world that displaces Paul sending him on his coming-of-age journey. He needs to decide the type of person he wants to be: one who looks away or helps make a change. This is truly a star-making role for Repeta. He carries the weight of the Film on his small shoulders with ease.

Gray doesn’t back away from the darker sides in the depiction of his family. Paul’s family doesn’t believe they are part of the problem. However, they are because they don’t actively help and they believe the picture society has painted of minority groups. The only one who wants equality is his Grandpa Aaron (Anthony Hopkins). His closest relationship is with his Grandpa and the strong bond between Hopkins and Repeta makes for tender, teary-eyed moments.

Furthermore, Gray shows the darker side of his childhood. Moments where he gave his mother, Esther (Hathaway), a very hard time. Hathaway is brilliant as a mother who only wants the best for her child and will do anything to stand up for him. His most turbulent relationship is with his father Irving (Strong). One scene has a short-fused Irving beating Paul with a belt. However, there are tender moments where we see Irving change. It’s a difficult role that Strong truly excels in.

Paul is at the time in his life when friends become family. Maybe even more so for him because of his turbulent home life. Gray also doesn’t pull punches with the depiction of himself. Johnny is Paul’s best friend, however, when he goes to a new school he pushes Johnny away because of the other students. When Johnny asks him for a place to stay, he is reluctant because of how his family has spoken about him. Gray shows the faults in his actions, he owns up to them. And in return, we get to see how this young boy learned that he should and could do better.

Armageddon Time is a story about a boy whose family wants him to conform to the American Dream, but all he wants to do is rebel against that and forge his own path. Additionally, it’s a reminder how Racism is learned and institutionalized. However, it only takes one person to break that cycle.

Armageddon Time screens at Cannes ’22:
Thu, May 19 at 7 PM at GRAND THÉÂTRE LUMIÈRE

Fri, May 20 at 9 AM at GRAND THÉÂTRE LUMIÈRE

Some snaps from the ARMAGEDDON TIME Press Conference with Strong, Hathaway, Gray and Repeta:

Eight-part Mini-Series WECRASHED recounts the rapid rise and fall of WeWork, which started in 2010 under Adam Neumann (Jared Leto) and Miguel McKelvey (Kyle Marvin). The Company gave new startup technology companies, among other new enterprises, the ability to acquire flexible workspaces. We get a glimpse of the egos that governed the WeWork, namely Adam and his wife Rebekah (Anne Hathaway), which led the company to face great scrutiny in its unconventional business practices and future outlook, failing in its initial offering of company stock. The directing duo of John Requa and Glenn Ficarra manage to take this spectacular failure which just now in 2021 is finally recovering from near-fatality, succeeding in being a publicly-shared company, making incredible entertainment of it all.

At the center of the story is Adam, just a fledgling entrepreneur who thinks and talks big. His way of working lands him not only the gig of his dreams, but also the woman of his dreams in Rebekah. We meet the latter as a struggling Yoga Instructor (making $1 per student) and Actress (she’s legitimately a first cousin to Gwyneth Paltrow). He swings big and has that magical ability to persuade getting others and more often than not, they buy into his infectious charisma. We’re taking notes, trust me.

The Series works on two levels. On the surface it is a study of how a company which had a valuation of $47 billion at one point, saw several missteps that led to its value plummeting. And just when you think it’s over, it isn’t. It also is a love story between a pair of narcissists and their commitment to making WeWork thrive because it keeps giving them each their own platform to be noticed and heard. This is a thing of marvel.

Leto nails the Comedy of this and is cast well, convincing in Adam‘s delusion of grandeur. We wished we got a bit more nuance though as it feels as though this is a portrayal of Adam (don’t get us wrong, he is great) more so when he’s “on”. What we would’ve wanted more of was a balancing of some of the dramatic elements, giving us an understanding of the drive behind the man who deceived and manipulated his way to a payout in the billions. Hathaway also gets the humour behind all this, but we are able to get a bit further under the surface with Rebekah and what makes her tick. Whether it be her failed attempt at acting, dealing relentlessly with people using her as an “in” with her famous cousin, or her relationship with her father Bob Paltrow (Peter Jacobson), who was jailed for tax evasion, Hathaway gets Rebekah‘s darkest vulnerabilities and why defeat for her just isn’t an option. America Ferrera joins the story as Elishia Kennedy, a bright entrepreneur grappling with her own separation from her husband, lured into the shimmer of what Adam and Rebekah are selling. She is fantastic and like her, we wonder “Is Adam for real?”.

It’s all like watching an accident and its aftermath unfold, which is exactly what we signed-up for.

WECRASHED screens at SXSW ’22 as follows:

The series is inspired by actual events — and the love story at the centre of it all. WeWork grew from a single coworking space into a global brand worth $47 billion in under a decade. Then, in less than a year, its value plummeted. What happened?

“WeCrashed” is created by Eisenberg (Spirit Award-nominated “Little America,” “Good Boys”) and Crevello (“The Long Dark”), who also serve as co-writers, executive producers and co-showrunners and is directed by John Requa and Glenn Ficarra (“This is Us,” “Crazy Stupid Love”). Requa and Ficarra executive produce alongside Charlie Gogolak, Hathaway and Natalie Sandy. Leto and Emma Ludbrook executive produce through their Paradox production company and Hernan Lopez, Marshall Lewy and Aaron Hart executive produce from Wondery.

These character-driven stories contend that even during our most seemingly isolated moments, in the most disparate of circumstances, we are all connected through the human experience. Amazon Studios’ Solos is executive produced by Weil and Laura Lancaster with Pixie Wespiser serving as a producer.  Weil makes his directorial debut, helming three episodes. Sam Taylor-Johnson directs and executive produces two episodes. Additional directors include Zach Braff and Tiffany Johnson.

Hmm. We feel like some people actually went through this. A separation delayed by lockdown. This is a new Film set to premiere on HBO Max!

Just as they decide to separate, Linda (Anne Hathaway) and Paxton (Chiwetel Ejiofor) find life has other plans when they are stuck at home in a mandatory lockdown. Co-habitation is proving to be a challenge, but fueled by poetry and copious amounts of wine, it will bring them closer together in the most surprising way.

Reimagining Roald Dahl’s beloved story for a modern audience, Robert Zemeckis’s visually innovative film tells the darkly humorous and heartwarming tale of a young orphaned boy (Jahzir Kadeem Bruno) who, in late 1967, goes to live with his loving Grandma (Octavia Spencer) in the rural Alabama town of Demopolis. As the boy and his grandmother encounter some deceptively glamorous but thoroughly diabolical witches, she wisely whisks our young hero away to an opulent seaside resort. Regrettably, they arrive at precisely the same time that the world’s Grand High Witch (Anne Hathaway) has gathered her fellow cronies from around the globe—undercover—to carry out her nefarious plans.

#GIVEAWAY: ENTER TO WIN ADVANCE PASSES TO SEE “THE HUSTLE”

Universal Pictures Canada x Mr. Will want to give Readers a chance to win Advance Passes
to see THE HUSTLE.

SYNOPSIS:
In the hilarious new comedy THE HUSTLE, Anne Hathaway and Rebel Wilson star as female scam artists, one low rent and the other high class, who team up to take down the dirty rotten men who have wronged them. 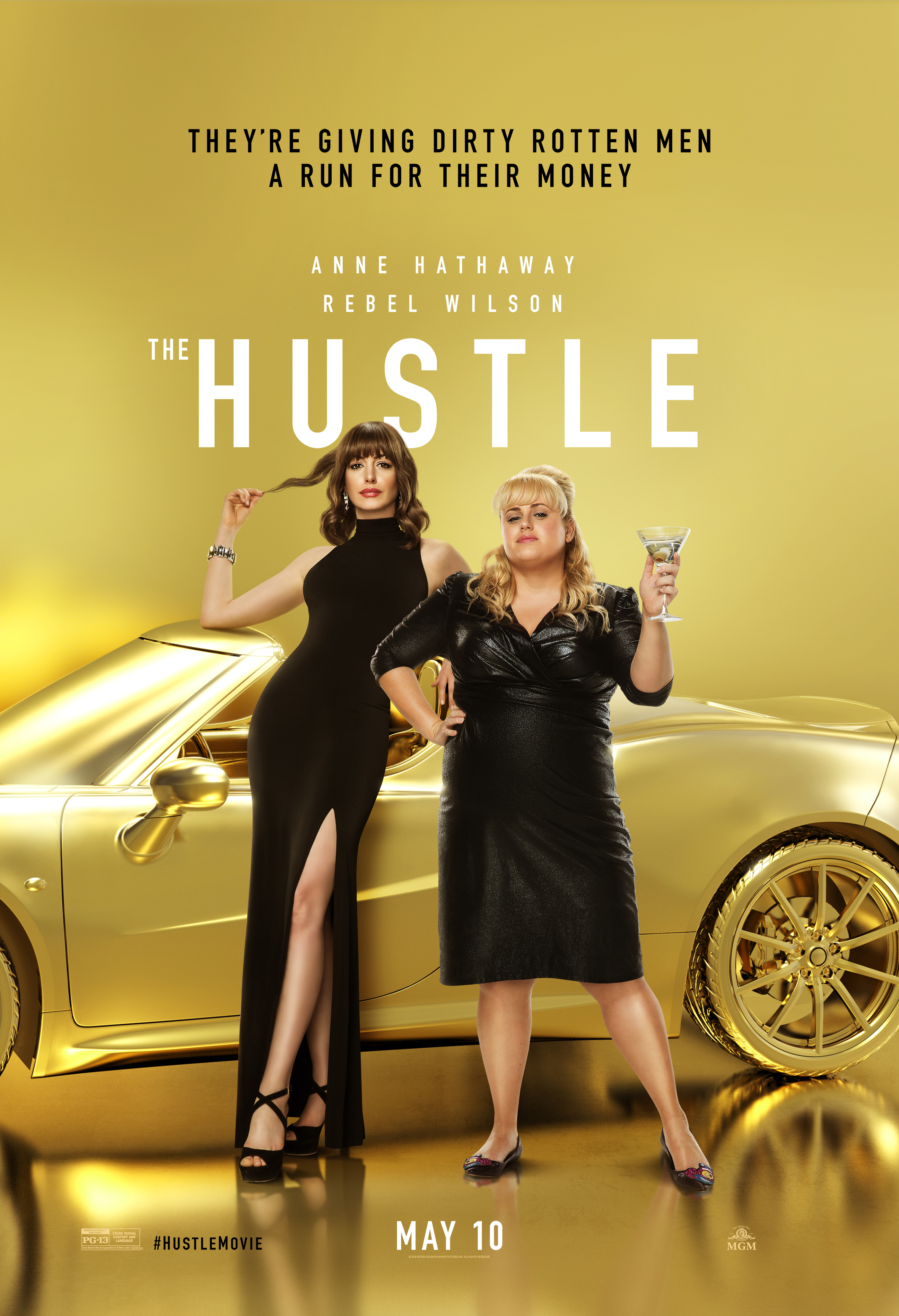 #FIRSTLOOK: NEW TRAILER FOR “THE HUSTLE”

Anne Hathaway and Rebel Wilson? Could there ever be a better pair? Check them out in the new Trailer for THE HUSTLE!

Synopsis:
In the hilarious new comedy THE HUSTLE, Anne Hathaway and Rebel Wilson star as female scam artists, one low rent and the other high class, who team up to take down the dirty rotten men who have wronged them.