Paramount Home Entertainment x Mr. Will want to give Readers a chance to win a Digital Download of LIKE A BOSS!

SYNOPSIS:
Best friends, Mia and Mel (Tiffany Haddish and Rose Byrne) are living their best lives, running their own cosmetics company until a villainous beauty mogul (Salma Hayek) conspires to steal it from under them. When her devious plan drives the besties apart, Mia and Mel learn that sticking together is the only way to turn the tables and take their company back. The beauty business is about to get ugly. The film also stars Jennifer Coolidge and Billy Porter.

Paramount Home Entertainment release LIKE A BOSS on Digital, out now, and on Blu-ray Combo Pack Tuesday, April 21, 2020.

#GIVEAWAY: ENTER TO WIN ADVANCE PASSES TO SEE “LIKE A BOSS”

Paramount Pictures Canada x Mr. Will want to give Readers in Montreal and Toronto a chance to win Advance Passes to see LIKE A BOSS! Screenings take place January 6, 2020.

SYNOPSIS:
Best friends Mia and Mel (Tiffany Haddish and Rose Byrne) are living their best lives running their own cosmetics company they’ve built from the ground up. Unfortunately, they’re in over their heads financially, and the prospect of a big buyout offer from a notorious titan of the cosmetics industry Claire Luna (Salma Hayek) proves too tempting to pass up, putting Mel and Mia’s lifelong friendship in jeopardy. The beauty business is about to get ugly. LIKE A BOSS also stars Billy Porter, Jennifer Coolidge, Ari Graynor, Natasha Rothwell, Jessica St. Clair and Karan Soni. 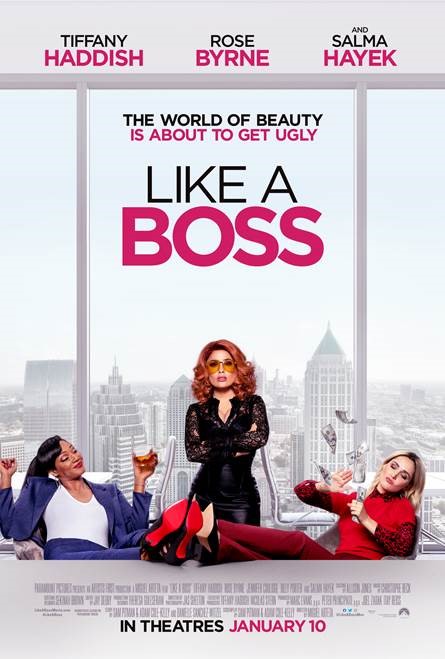