#GIVEAWAY: ENTER FOR A CHANCE TO WIN “DOWNTON ABBEY: A NEW ERA” ON BLU-RAY

Universal Pictures Home Entertainment x Mr. Will want to give Readers a chance to win a copy of DOWNTON ABBEY: A NEW ERA on Blu-ray!

From award-winning creator Julian Fellowes comes the motion picture event DOWNTON ABBEY: A NEW ERA. The much-anticipated cinematic return of the global phenomenon reunites the beloved cast as they go on a grand journey to the South of France to uncover the mystery of the Dowager Countess’ newly inherited villa.

Enter for a chance to #win a copy of DOWNTON ABBEY: A NEW ERA on Blu-ray!

It should come as absolutely no surprise that TOP GUN: MAVERICK dominates again a second week, this weekend with a stellar $84.5 million from 4,751 theatres for Paramount Pictures. Over two weekends it grosses $290 million domestically.

Second is DOCTOR STRANGE IN THE MULTIVERSE OF MADNESS with $8.8 million from 3,765 theatres. It has just been announced that this will arrive on Disney+ June 22, 2022. This brings its domestic total to $388 million for Disney.

DOWNTON ABBEY: A NEW ERA is at the bottom of the Top Five, with $3 million from 3,451 theatres for Universal Pictures/Focus Features. It has made $35.7 million to date in North America.

It comes as absolutely no surprise that TOP GUN: MAVERICK flies high in its debut this weekend, setting a personal best for Tom Cruise being his first ever opening to surpass $100 million, while setting a U.s. Memorial Day weekend record! This is actually surprising! The Sequel to the iconic 1986 film, earns $123 million from 4,735 theatres for Paramount Pictures in its debut. By comparison, its Predecessor opened with $8,193,052. Look how far we’ve come! It also garners 97% on the Tomatometer.

Second spot goes to DOCTOR STRANGE IN THE MULTIVERSE OF MADNESS with $17 million, after three weeks on-top. This brings its total to $376 million domestically for Disney.

THE BOB’S BURGERS MOVIE debuts in third with $15.6 million from 3,425 theatres for 20th Century Studios. This Adaptation of the popular TV Series, gets 86% on the Tomatometer.

Fourth goes to DOWNTON ABBEY: A NEW ERA with $6.4 million for Universal Pictures/Focus Features. Over to weekends it has brought in $30 million.

Rounding this Top Five out is THE BAD GUYS with $4.9 million, for a total $83.6 million for Universal Pictures.

For a third straight weekend Marvel’s DOCTOR STRANGE IN THE MULTIVERSE OF MADNESS takes the #1 spot at the Box Office in North America, with $30 million from 4,534 theatres. Over three weekends it has grossed a stellar $340.5 million.

Second in its debut is DOWNTON ABBEY: A NEW ERA with $18 million from 3,820 theatres for Focus Features/Universal Pictures. It gets 85% on the Tomatometer. Its Predecessor film opened in 2019 with $31 million.

Third is THE BAD GUYS which has been quite resilient in the Top Five, with $5.7 million from 3,705 theatres for Univerrsal Pictures. Over dive weekends, it has grossed a total $73.9 million.

Fourth spot goes to SONIC THE HEDGEHOG 2 with $3.9 million, a total $181 million over seven weekends for Paramount Pictures.

In fifth is MEN from Director Alex Garland, bringing-in $3.3 million in its opening weekend for A24/VVS Films. It gets 76% on the Tomatometer.

It’s a new era at DOWNTON ABBEY and in-town to promote the latest Film in the dearly-beloved Franchise are Kevin Doyle, who plays butler Joseph Molesley and Raquel Cassidy who plays maid Phyllis Baxter. Will these two finally seal the deal in this latest chapter after years of flirtation?

In DOWNTON ABBEY: A NEW ERA, directed by a returning Simon Curtis, we see a Film Crew wish to make a silent film at Downton and Lady Mary (Michelle Dockery) decides to stay behind to supervise. Soon we find the staff and Lady Mary growing increasingly invested in this Film, as she befriends director Jack Barber (Hugh Dancy), who struggles to get the project completed, as Silent Films continue to decline in popularity. Meanwhile, Violet (Maggie Smith) who is unwell, learns that she has inherited a villa from a man she once had been romantically-involved with, which opens-up a series of questions, particularly in son Robert (Hugh Bonneville) about his identity. Butler Thomas Barrow (Robert James-Collier) strikes an unexpected friendship with Movie Star Guy Dexter (Dominic West), and Cora Crowley (Elizabeth McGovern) is battling a mysterious illness.

A brand-new Trailer out in time for the Film’s release:

So many juicy story lines, with a generous dash of wit, and also the lingering feeling that times are changing with Downton begins to see some of its gradeur fade. DOWNTON ABBEY: A NEW ERA is a pure joy. And believe me, you don’t need to have watched the Series or this Film’s predecessor for that matter to enjoy it!

Doyle and Cassidy did a day of press out of Scotiabank Theatre, where they also surprised fans at a Special Advance Screening of the Film, moderated by our friend Bonnie Laufer. And *Spoiler Alert* they talk about their characters’ relationship together and filming through the Pandemic.

Some Snaps from the evening:

Last week, we were so fortunate to get to attend a Macaron-making class with Toronto institution Le Dolci in celebration of DOWNTON ABBEY: A NEW ERA‘s release. Of course, with the Movie being set partly in France, it would only make sense!

Some highlights from our night here:

We present the new Teaser Trailer for DOWNTON ABBEY: A NEW ERA.

DOWNTON ABBEY: A NEW ERA. The much-anticipated cinematic return of the global phenomenon reunites the beloved cast as they go on a grand journey to the South of France to uncover the mystery of the Dowager Countess’ newly inherited villa.

Great news for DOWNTON ABBEY fans! The original Principal Cast will be returning in upcoming DOWNTON ABBEY 2. Joining the Cast are Hugh Dancy, Laura Haddock, Nathalie Baye and Dominic West will join the cast. Downton creator Academy Award® winner Julian Fellowes will once again write the film’s screenplay, with Emmy and BAFTA Award-winning Gareth Neame and Emmy Award-winning Liz Trubridge back to produce with Fellowes. BAFTA and Emmy-nominated director Simon Curtis (My Week with Marilyn) will join the filmmaking team to direct the sequel. 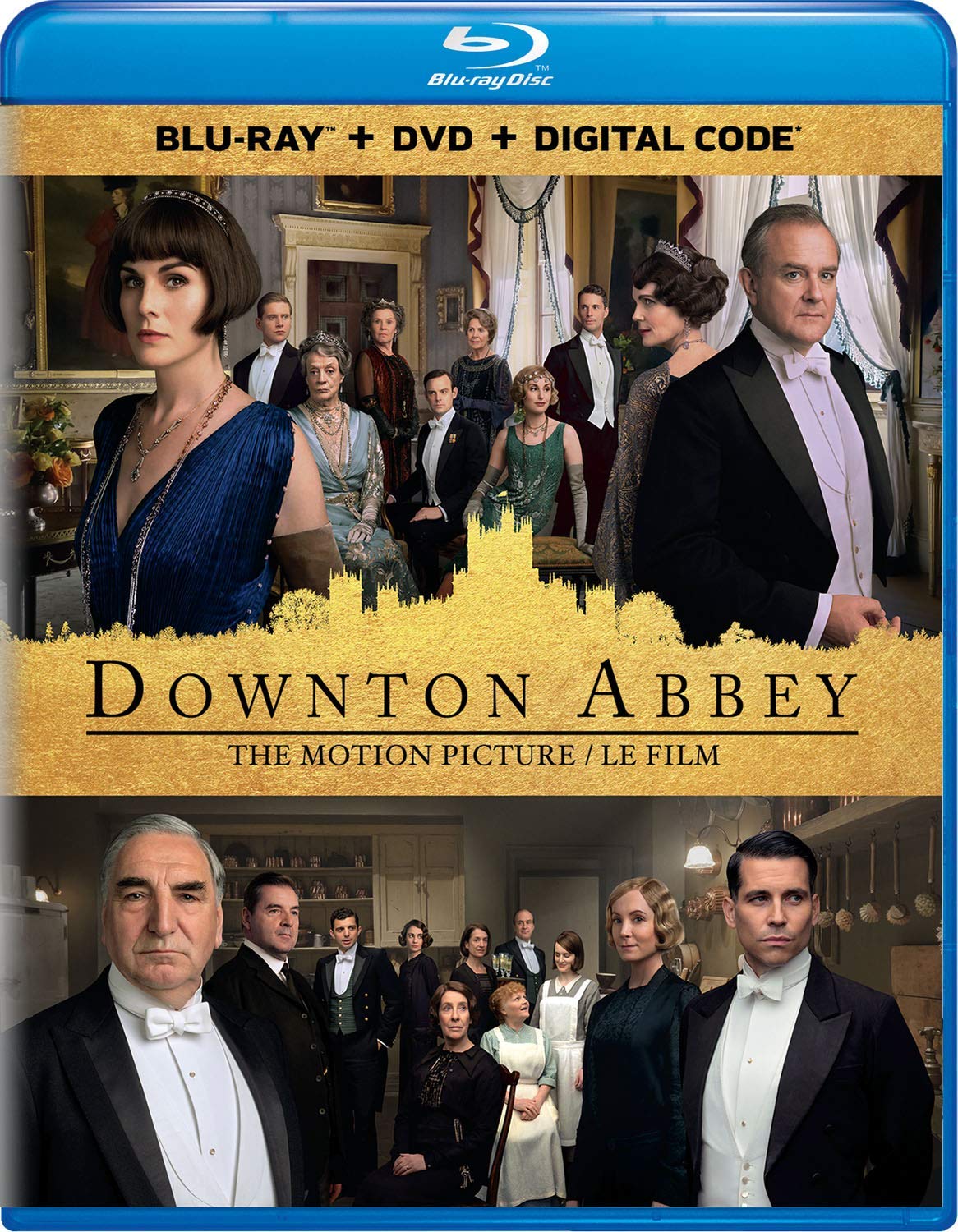 #BOXOFFICE: “THE JOKER” LAUGHS ITS WAY TO THE TOP

This is no joke, THE JOKER debuts with a phenomenal $94 million from 4,374 theatres for Warner Bros. this weekend. The Golden Lion winner at Venice gets 70% on the Tomatometer and a B+ CinemaScore, while becoming The Hangover Helmer Todd Phillips‘ best opening yet.

ABONIMABLE is in second with $13 million for Universal Pictures, a two week total of $37.8 million.

DOWNTON ABBEY is in third $8.7 million, a three week total of $87 million for Focus Features/Universal Pictures.

HUSTLERS lands in fourth with $6.2 million, making for a four week run of $91.2 million for STX Entertainment/Elevation Pictures.

JUDY makes its debut in the Top Ten in seventh with $4.1 million, expanding to 1,458 theatres for Roadside Attractions/eOne Films. It sits at 83% on the Tomatometer.

SYE RAA NARASIMHA REDDY rounds out the Top Ten with $1 million from 310 screens, the Epic which is available in multiple languages including Hindi, Telugu and Tamil, winning many critical raves in other territories.