Never taunt death.  Just days after an Internet Hoax had surfaced surrounding his death, Fast and the Furious Franchise Star Paul Walker is confirmed dead after a freak accident.  Walker was killed after his new Porsche GT slammed into a post or a  tree in Santa Clarita (just north of Los Angeles) earlier this afternoon, resulting in a fiery explosion.  Roger Rodas, a Friend of Walker and also a former Race Car Driver, was in the Car at the time also was killed as first reported and confirmed by TMZ. 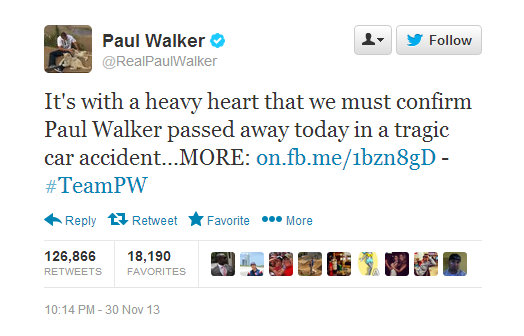 Walker made his Big Screen Debut in 1986’s Monster in the Closet but gained international success with his Breakout Role in 2001’s Fast and the Furious as  Police Officer Brian O’Conner opposite Vin Diesel.  He more recently starred in the sixth Film of the Franchise earlier this year, which went-on to gross $788 million worldwide at the Box Office.  He had just filmed Brick Mansions in Montreal, Quebec earlier this year also.

The Actor was only 40-years-old at the time of death.  We send our condolences to Walker‘s Friends and Family.  We hope that those who invest their energy creating cruel Internet Hoaxes gain a valuable lesson from this Tragedy.

fast and the furious paul walker

Click here to cancel reply.
#TORONTOBOUND: RESERVE YOUR TICKETS FOR A FREE SCREENING OF “ANOTHER DAY ANOTHER TIME” | BUY TICKETS FOR THE CANADIAN PREMIERE OF “INSIDE LLEWYN DAVIS”
#BOXOFFICE: “FIRE” AND ICE COMMAND THE BOX OFFICE U.S. THANKSGIVING WEEKEND