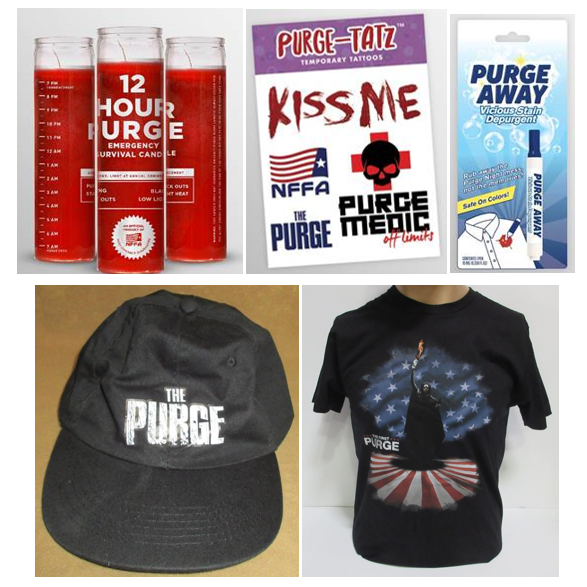 Synopsis:
Expanding the universe introduced in the hit franchise that electrified the culture and earned $200 million at the worldwide box office, Universal Pictures’ The Purge: Election Year reveals the next terrifying chapter that occurs over 12 hours of annual lawlessness sanctioned by the New Founders of America to keep this country great.

It’s been two years since Leo Barnes (Frank Grillo) stopped himself from a regrettable act of revenge on Purge Night. Now serving as head of security for Senator Charlie Roan (Elizabeth Mitchell), his mission is to protect her in a run for president and survive the annual ritual that targets the poor and innocent. But when a betrayal forces them onto the streets of D.C. on the one night when no help is available, they must stay alive until dawn…or both be sacrificed for their sins against the state.

CALL NOW (or VISIT OUR WEBSITE) FOR A CHANCE TO WIN TICKETS TO SEE THE PURGE: ELECTION YEAR.  IN THEATRES ON JULY 1.

#BOXOFFICE: “DAWN OF THE PLANET OF THE APES” #1 A SECOND STRAIGHT WEEK

For the second week in-a-row, Dawn of the Planet of the Apes finds itself atop the Box Office again with $36 million from 3,969 theatres for 20th Century Fox. The second film in the Apes Franchise to date has grossed $138 million in its two week run.

The Purge: Anarchy opens in second spot with $28.4 million from 2,805 theatres for Universal Pictures, almost matching its 2013 Predecessor, which debuted with $34 million. Critics gave the Horror mixed reviews, tallying-in at 53% on the Tomatometer at Rotten Tomatoes, while Audiences gave it a neither here nor there B CinemaScore.

Planes: Fire & Rescue debuts in third with $18 million for Disney from 3,826 theatres. Taking place in the same World as the Studio’s massively-successful Cars Franchise, Critics didn’t take to the family-friendly offering with a 45% score on the Tomatometer. Audiences on the other hand loved it, giving it an A CinemaScore.

The heavily-promoted Sex Tape debuts in fourth spot with $15 million for Sony Pictures from 3,062 theatres. The Comedy starring Jason Segel and Cameron Diaz pulls in a paltry 20% on the Tomatometer from Critics and Audiences didn’t think much of it either with a C+ CinemaScore.

Maleficent rounds-out the Top Ten with $3 million in its eighth week out, edging-in on $230 million domestically.

It was a monstrous weekend at the Box Office with spectacular numbers from the Top Three-finishing Films.  Alas it was Families who ruled Ticket Sales with Monsters Inc. Prequel, Monsters University, opening on-top with a stellar $82 million from 4,004 theatres across North America for Disney.  With John Goodman and Billy Crystal reprising their roles as Mike Wazowski and Sulley, Audiences could not resist getting another chance to see the animated Duo on-screen, giving the Film an A CinemaScore, while Critics agreed it was a solid effort with a decent 77% on the Tomatometer at Rotten Tomatoes.  By comparison, its Predecessor in 2001 opened with $62 million domestically.

Not to be outdone, Paramount Pictures’ World War Z opened in second with $66 million.  Starring Brad Pitt, this continent-hopping Action/Horror/Adventure thrilled Audiences who gave it a B+ CinemaScore, and Critics were on-par with 67% rating on the Tomatometer.  Moviegoers cannot get enough of Zombies, this becoming the highest opening ever for a Zombie Flick, surpassing last year’s Hotel Transylvania which debuted with $42 million.

Man of Steel had a superb opening last week and doesn’t disappoint despite its slip to third spot for Warner Bros. The latest in the Superman Franchise earns $41.2 million domestically this weekend.  Internationally it already has surpassed the $350-million mark.

Sony Pictures Comedy This is the End amidst all the Blockbusters, certainly holds its own in fourth spot with $12.6 million in its second week of release, just ahead of the resilient Now You See Me in fifth with $7/8 million in its third week out for Summit Entertainment/Lionsgate Films/eOne Films.  Meanwhile, former Champion The Purge slips to sixth for Universal Pictures with $3.3 million.

Rounding it out  is Veteran Iron Man 3 which in its eighth week earns $8.1 million placing Disney at the top and bottom of the Top Ten. In limited release, Sofia Coppola‘s The Bling Ring sits in eleventh with $2 million from only 650 theatres.  Overall, Critics gave the Docu-Drama about a group of Teens who robbed the homes of Celebrities, mixed to bordering-positive Reviews with 58% on the Tomatometer.

#BOXOFFICE: “MAN OF STEEL” MADE OF METAL AT BOX OFFICE WITH RECORD-SETTING WEEKEND

No surprises here!  Man of Steel debuts on-top this weekend from 4,207 theatres with a whopping $151 million for Warner Bros. over the four-day Father’s Day Weekend.  From Friday through Sunday, it grossed $125 million in North America, making it this highest-grossing June opening of all time. Despite mixed reviews overall from Critics (56% on the Tomatometer), Loyal Fans to the Franchise could not be deterred, actually giving the Film some strong word of mouth, garnering an A- CinemaScore.  Made for $225 million, the Zack Synder-directed Film starring Henry Cavill debuted in 24 markets overseas, number one across-the-board!

Not to be outdone, Sony Pictures Apocalypse-Comedy This is the End, starring a stellar Cast of Friends including Seth Rogen, James Franco, Jonah Hill, Jay Baruchel, Michael Cera, Emma Watson, Craig Robinson and Danny McBride, performs well to debut in second with $20.3 million over the three-day weekend.  Made for $32 million, the Film earned an B+ CinemaScore, faring better with Critics with its  85% rating on the Tomatometer.

Now You See Me continues to go strong in third in its third week, with $11.1 million for Summit/Lionsgate and eOne Films. To date it has grossed over $80 million in North America.

Last week’s Champion The Purge, slips to fourth this weekend with $9.0 million, placing it just ahead of another former Champ in Fast and the Furious 6, with $9.1 million, good enough for fifth in this its fourth week in theatres.

Rounding-out the Top Ten are After Earth starring Father-Son Duo Will & Jaden Smith with $3.5 million in ninth and Iron Man 3, which earns $2.7 million in its seventh week. The latter is on the verge of surpassing the $400-million mark domestically.

A huge surprise at the Box Office this weekend as the R-rated Home Invasion-Horror with a tiny budget trumps all!  The Purge from Universal Pictures grosses a shocking $36.3 million in its debut, exceeding all expectations.  More impressively, it is showing only in 2,536 theatres. Critics gave it 41% on the Tomatometer at Rotten Tomatoes, while Audiences gave it a C CinemaScore. Starring Ethan Hawke and Lena Headey, the Film  is one of two Films in currently in theatres for Hawke as Romantic-Drama, Before Midnight,  reuniting him a third time with Richard Linklater and Julie Delpy, lands in fifteenth spot also with $585k from only 50 theatres.

Box Office Monster Fast and the Furious 6 continues to perform well in second for Universal Pictures, earning $19.7 million in this its third week, just ahead of Now You See Me in third with $19.5 million, in its second week exceeding expectations.

Reuniting Vince Vaughn and Owen Wilson, The Internship debuts in fourth spot with $18.1 million for 20th Century Fox. Critics didn’t love the Google-inspired Comedy, earning 41% on the Tomatometer, while earning  a much better B+ CinemaScore.

Animated Feature, Epic, in its third week earns $12.1 million for 20th Century Fox, the only Family-oriented Film in the Top Ten.

Meanwhile, Will & Jaden Smith‘s After Earth finds itself in seventh spot with $11.2 million and The Hangover Part III slips to eighth spot with $7.3 million for Warner Bros.  The Great Gatsby rounds-out the Top Ten with $4.2 million in its fifth week, now grossing over $136 million in North America.