JUMANJI: THE NEXT LEVEL is second with $30.8 million from 4,227 theatres for Sony Pictures. It has grossed $176 million in its third week.

FROZEN 2 takes third with $18.5 million, a total $423 million in its sixth weekend for Disney.

LITTLE WOMEN debuts in fourth with $18 million for Sony Pictures, from 3,308 theatres. Greta Gerwig‘s Adaptation gets 95% on the Tomatometer.

SPIES IN DISGUISE opens in fifth with $13.1 million from 3,502 theatres for 20th Century Fox. It gets 73% on the Tomatometer and an A- CinemaScore.

UNCUT GEMS lands in sixth with $10.9 million for A24/Netflix, expanding to 2,341 theatres. It gets 93% on the Tomatometer and oddly, a disproportionate C+ CinemaScore.

CATS in its second week out gets $5.1 million from 3,380 theatres for Universal Pictures. 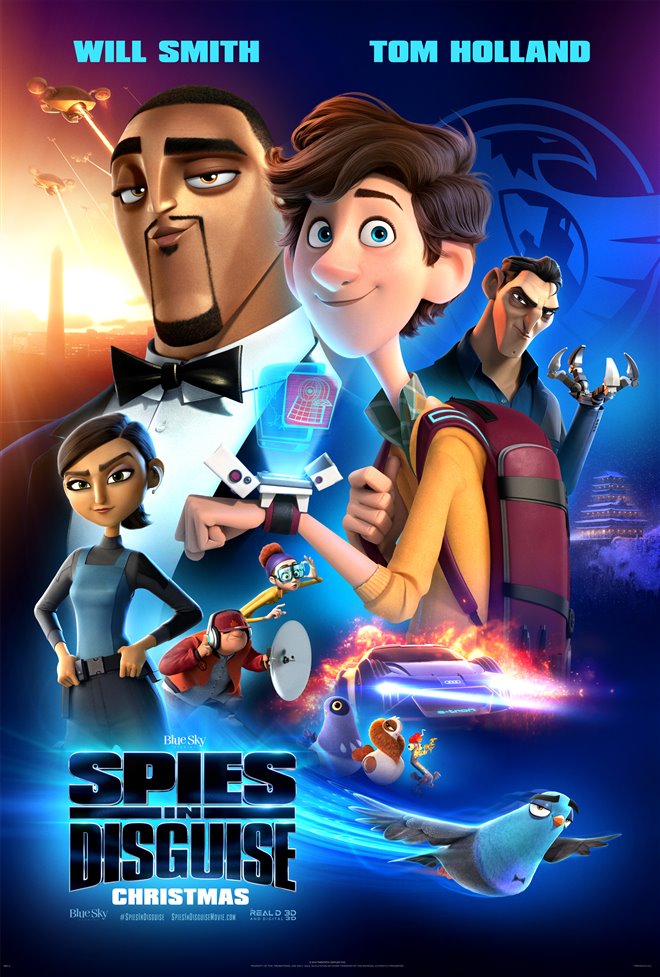 Check-out the brand new Trailer for SPIES IN DISGUISE, in theatres this Christmas!

Synopsis:
Twentieth Century Fox presents a Blue Sky Studios production, “Spies in Disguise,” an animated spy comedy adventure set in the slick, high-octane, globe-trotting world of international espionage. Super spy Lance Sterling (Will Smith) and scientist Walter Beckett (Tom Holland) are almost exact opposites. Lance is smooth, suave and debonair. Walter is…not. But when events take an unexpected turn, this unlikely duo is forced to team up for the ultimate mission that will require an almost impossible disguise-transforming Lance into the brave, fierce, majestic…pigeon. Walter and Lance suddenly have to work as a team, or the whole world is in peril.

Mark Ronson x Anderson .Paak have teamed-up from THEN THERE WERE TWO, a Track from the Film’s Soundtrack. Check it out here:


SPIES IN DISGUISE is in theatres Christmas Day.

Walt Disney Studios Canada sure knows how to throw an event! Invited guests were treated to goodies galore and then asked to take their seats at the Bell TIFF Lightbox Theatre where Disney had a lot to celebrate. Their streaming service, Disney+, had over 10 million sign-ups in its first day. And now, their Film Libraries include movies from Marvel, Fox, Fox Searchlight and much more. Alongside FROZEN 2, their other big end-of-year releases include STAR WARS: THE RISE OF SKYWALKER and what looks to be a quirky animated spy movie, SPIES IN DISGUISE featuring the voices of Will Smith and Tom Holland. But what had me excited was some of their Feature Films to be released in 2020.

THE KING’S MAN: An Action Adventure piece set during World War I and starring Harris Dickinson, Ralph Fiennes, this one has all the makings of a monster hit. The sequences shown were exquisitely filmed with a Cast of characters that tickle the imagination.

BLACK WIDOW: If the rest of this Movie has the same intensity as the fight scene between Scarlett Johannson (reprising her AVENGERS character) and Florence Pugh, it is going to soar! No more spoilers.

SOUL: Pixar definitely has another classic on its hands with this Animated Movie about a musician who has lost his passion for music is transported out of his body and must find his way back with the help of an infant soul learning about herself. The talented voices include Jamie Foxx, Tina Fey and Daveed Diggs and a sultry jazz Soundtrack, I cannot wait to see this.

ONWARDS: Set in a suburban fantasy world, two teenage elf brothers, Ian and Barley Lightfoot, go on a journey to discover if there is still a little magic left out there in order to spend one last day with their father, who died when they were too young to remember him. This Animated Feature, voiced by Tom Holland, Chris Pratt and Julia Louis-Dreyfus should appeal to the young in age and the young at heart.

MULAN: A live-action version of the Disney Animated Classic about a young girl who disguises herself as a male warrior to save her father, just might hit all the right notes. The sequences shown were dazzling and the all-Asian Cast, exuded sheer power.

THE JUNGLE CRUISE: Another movie inspired by a Disney Amusement Park ride and starring Dwayne Johnson and Emily Blunt, this one looks to be pure entertainment with a story that looks to be inspired by the Humphrey Bogart and Katherine Hepburn Classic THE AFRICAN QUEEN. The energy is high, the puns instill giggly groans and everyone on screen looks like they are having the time of their life.