JUMANJI: WELCOME TO THE JUNGLE for a second week in a row takes  the top of the Box Office for Sony Pictures with $24.4 million from 3,849 theatres. Over four weeks it not only has overcome its tough rival STAR WARS: THE LAST JEDI, but it has made a stellar $286.9 million domestically.

THE POST expands to second spot with $17.2 million for 20th Century Fox from 2,819 theatres.  Over four weeks it  has made $25 million in limited release. The Oscar Contender directed by Steven Spielberg and starring both Tom Hanks and Meryl Streep, gets 88% on the Tomatometer and an A CinemaScore.

THE COMMUTER debuts in third with $12.7 million from 2,892 theatres for Lionsgate Films/VVS Films. The Action-Thriller starring genre king Liam Neeson, gets 56% on the Tomatometer and a B CinemaScore from Audiences.

THE GREATEST SHOWMAN is in fifth with $11.2 million for 20th Century Fox. It has now made $96.5 million over four weeks. It’s Soundtrack continues to perform well, hitting #1 on the U.S. Billboard Hot 200 Album Chart.

STAR WARS: THE LAST JEDI still is going strong in sixth with $10.9 million for Disney from 3,090 theatres. Over five weeks it has made a blistering $594.2 million in North America.

PADDINGTON 2 debuts in seventh with $10.8 million from 3,702 theatres for Warner Bros. Its 2015 Predecessor opened with $18.9 million. It stands at a remarkable 100% on the Tomatometer and an A CinemaScore.

PROUD MARY opens in eighth with $9.8 million for Sony Pictures from 2,125 theatres. It gets 25% on the Tomatometer and a B+ CinemaScore.

MOLLY’S GAME rounds-out the Top Ten for Lionsgate Films/eOne Films with $4.1 million from 1,708 theatres in its third week. It has made $21.7 million domestically.

#BOXOFFICE: “JUMANJI” SWINGS TO THE LEAD IN THIRD WEEK

After playing bridesmaid for a couple weeks, JUMANJI: WELCOME TO THE JUNGLE swings to the lead with $35 million from 3,801 for Sony Pictures. Over three weeks it has grossed a smart $244.1 million domestically.

Debuting in second is fellow Sony Pictures release INSIDIOUS: THE LAST KEY. The Horror opens with $25.9 million from 3,116 theatres. It gets 25% on the Tomatometer and a B- CinemaScore.

STAR WARS: THE LAST JEDI after a complete domination, slips to third with $23.6 million in week three for Disney. It has grossed a whopping $572.5 million thus far in North America.

THE GREATEST SHOWMAN quietly continues to grind in fourth with $14.1 million for 20th Century Fox, a three week tally of $77.2 million.

PITCH PERFECT 3 goes along in fifth with $10.5 million in its third week, a total $86.2 million made for Universal Pictures.

MOLLY’S GAME makes its Top Ten debut in seventh, expanding to 1,608 theatres with $6.6 million for STX Entertainment/eOne Films. The Aaron Sorkin-directed Oscar Contender has made $13.8 million over two weeks, it gets 82% on the Tomatometer.

ALL THE MONEY IN THE WORLD rounds-out the Top Ten with $3.6 million in week two for Sony Pictures. It has made $20.2 million to date. 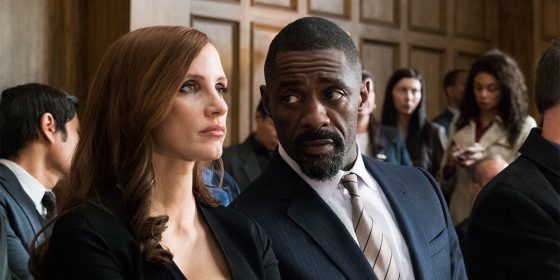 Mr. Will x eOne Films want to give Readers a chance to attend an Advance Screening of MOLLY’S GAME, Aaron Sorkin’s directorial debut. The Screening takes place in Toronto, Vancouver, Calgary, Edmonton, Winnipeg, Halifax, Ottawa and Victoria on Monday December 18th at 7:00PM. Can’t make it? We also are offering a special Prize Pack with Molly Bloom cards from the set of the Film plus Run-of-Engagement Passes at a later date. Stay tuned for that.

MOLLY’S GAME stars Jessica Chastain as Molly Bloom – Colorado Olympic-class skier turned high-stakes poker princess. Also starring Idris Elba, Kevin Costner and , the film dives into the elusive world of elite poker that caters to Hollywood royalty, sports stars, and business titans. Molly finds herself attracting the wrong kind of attention when she inadvertently engages members of the Russian mob at her table. Her streak comes to a grinding halt when she’s arrested in the middle of the night by 17 FBI agents. 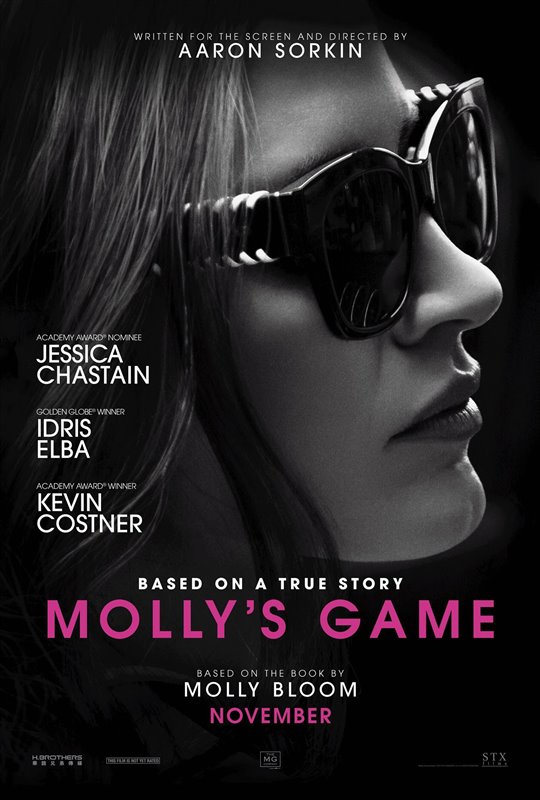 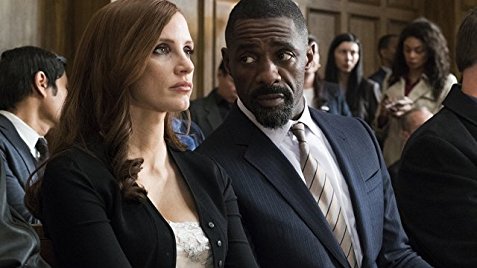 Former Olympic hopeful Molly Bloom was always the smartest woman at the table. Molly ran poker games on both coasts and made millions catering to rich, elite men who thought nothing of losing six figures in a single night. Filmed in Toronto, Molly’s Game asks us to feel empathy for a woman whom Writer/Director Aaron Sorkin clearly feels none.

As the Movie opens, Molly (Jessica Chastain hiding under thickly applied make-up) is being arrested by the FBI. Her lawyer (Idris Elba) suggests that she tell the unedited story of her time setting-up high stakes poker games for the rich, famous, and unsavoury of both LA and New York. Unwilling to betray her personal code of ethics, Molly refuses. Instead, Molly tells us the story of her boss (Jeremy Strong), Player X (Michael Cera), and all the people she met on her way down.

The audience is expected to like Molly because she has a strict moral code which only slips due to ongoing daddy issues. (This is unambiguously explained by daddy himself, Kevin Costner, in an unneeded Third Act scene.) A worthy hot ticket if only for the cast, I’m calling Sorkin’s bluff and declaring Molly’s Game a weak ace.

eOne Films will screen Molly’s Game at TIFF ’17 at the following times:

Mr. Will x eOne Films want to give Readers a chance to win Run-of-Engagement Passes to see MOLLY’S GAME, Aaron Sorkin’s directorial debut. We also are offering selected winners a special Prize Pack with Molly Bloom cards from the set of the Film! 🃏

MOLLY’S GAME stars Jessica Chastain as Molly Bloom – Colorado Olympic-class skier turned high-stakes poker princess. Also starring Idris Elba, Kevin Costner and , the film dives into the elusive world of elite poker that caters to Hollywood royalty, sports stars, and business titans. Molly finds herself attracting the wrong kind of attention when she inadvertently engages members of the Russian mob at her table. Her streak comes to a grinding halt when she’s arrested in the middle of the night by 17 FBI agents.