#BOXOFFICE: “LONE SURVIVOR” ALONE AT THE THE TOP IN DEBUT

Lone Survivor finds itself alone at the top of the Box Office this weekend, besting the competition with an impressive $38.5 million from 2,876 theatres for Universal Pictures/eOne Films. The Film, based on the Story of Hero Marcus Luttrell and made for $50 million, is well on its way to recouping its production costs quickly. Produced by and starring Mark Wahlberg, who also stars in it, the War-Drama earn an outstanding A+ CinemaScore from Audiences, while Critics gave it 73% on the Tomatometer.

Disney‘s Frozen meanwhile in its eighth week finally gets dethroned after a multi-week reign, earning $15 million this weekend. The Animated Feature just recently surpassed the $300-million mark in North America.

The Wolf of Wall Street, seems to have struck-up quite a bit of controversy surrounding its depiction of greed, corruption and chauvinism, but this isn’t stopping Moviegoers from seeing it. In its third week out, it brings-in $9 million for Paramount Pictures, placing it in third spot.

A debuting The Legend of Hercules lands in fourth iwith $8.6 million for Lionsgate Films. The Action-Fantasy which has yet to be released in Canada, garnered a paltry 2% from Critics on the Tomatometer, while Audiences gave it a B- CinemaScore.

Former Champ The Hobbit: The Desolation of Smaug slips to fifth spot with $7.9 million this weekend for Warner Bros.

August: Osage County debuts in sixth spot for The Weinstein Co./eOne Films with $7.3 million, expanding well to 900 theatres across North America this weekend. The Film which is in-contention for Awards in acting categories especially for Julia Roberts and Meryl Streep, received a 65% rating on the Tomatometer.

Anchorman 2: The Legend Continues, rounds-out the Top Ten with $5.8 million for Paramount Pictures in its fourth week.

#BOXOFFICE: “THE HOBBIT: THE DESOLATION OF SMAUG” CONTINUES TO DOMINATE BOX OFFICE THROUGH CHRISTMAS

Incredible!  For the third week in-a-row, The Hobbit: The Desolation of Smaug tops the North American Box Office, albeit narrowly with $29.9 million for Warner Bros., placing it just ahead of the stalwart Frozen in second with $28.8 million for Disney.  The former has earned over $190 million now in its domestic run, while the latter in five weeks has grossed $247 million.

Anchorman 2 in its second week finds itself in third spot with $20.2 million for Paramount Pictures, already earning $85.3 million.

American Hustle in its second week of wide expansion to 2,507 theatres, earns $19.6 million for Sony Pictures/eOne Films for a two-week total of $60.4 million.

Martin Scorcese‘s The Wolf of Wall Street after opening on Christmas Day, earns $18.5 million this weekend for Paramount Pictures from 2,537 theatres. Since its opening, it has grossed $35 million – not at all bad considering its R-rating. Critics gave the Film based on the Memoir by Jordan Belfort, starring Leonardo DiCaprio, a 76% rating on the Tomatometer. Audiences surprisingly gave it only a C CinemaScore.

Saving Mr. Banks plays in 2,110 theatres for Disney and earns $14 million this weekend, a two-week total of $37.8 million domestically.

Also opening on Christmas Day, The Secret Life of Walter Mitty opens in sixth with $13 million from 2,110 theatres this weekend for 20th Century Fox.  The Film received some mixed reviews with 57% on the Tomatometer, while Audiences gave it a much more promising B+ CinemaScore.

47 Ronin opened in 2,689 theatres across North America on Christmas Day for Universal Pictures, garnering $9.8 million.  Audiences gave it a B+ CinemaScore, while Critics were far less forgiving  on the Action-Adventure starring Keanu Reeves, only 17% on the Tomatometer.

Grudge Match rounds-out the Top Ten with $7.3 million from 2,838 theatres for Warner Bros., also opening on Christmas Day. The Boxing-Comedy starring Sylvester Stallone and Robert DeNiro didn’t receive critical love with 21% on the Tomatometer, while Audiences enjoyed it much more with a B+ CinemaScore.

#BOXOFFICE: “THE HOBBIT: THE DESOLATION OF SMAUG” NARROWLY HOLDS-OFF “ANCHORMAN 2”

In its second week out, The Hobbit: The Desolation of Smaug continues to perform phenomenally at the Box Office with $31.4 million from 3,928 theatres for Warner Bros. In just two weeks, the second in the Peter Jackson-helmed Trilogy has grossed over $128 million.

Anchorman 2: The Legend Continues in its debut certainly is no slouch only getting bested narrowly with $26.8 million from 3,507 theatres for Paramount Pictures. Critics loved the Sequel to the 2004 Box Office Hit, which also opened with a similar $28 million in its debut. Critics gave it positive Reviews, coming-in at 75% on the Tomatometer and an on-par B CinemaScore.

Oscar Contender American Hustle expands in its second week to third spot with $19.1 million  from 2,507 theatres. .  The ’70s-set Dramedy from David O. Russell (The Fighter) comes with astoundingly good Reviews (94% on the Tomatometer), although Audiences were a little less enthused with a B+ Cinemascore.  This ties with former Champ Frozen in third spot, now in its sixth week as it has its eyes set on that $200-mark domestically.

Saving Mr. Banks expands in fifth spot with $10 million, coming also with very strong Reviews, sitting at 81% on the Tomatometer. Audiences gave it a fair A CinemaScore.

The Hunger Games: Catching Fire finds itself in sixth with $9.5 million, now in its fifth week of release,  just surpassing the $370-million mark in North America for Lionsgate Films/eOne Films.

Walking With Dinosaurs opens in eighth spot with $7.3 million from 3,231 theatres for eOne Films/20th Century Fox.  Critics panned the Family Flick voiced by Justin Long and John Leguizamo, getting 21% on the Tomatometer, while Audiences enjoyed it much more with a B+ CinemaScore.

Thor: The Dark World pulls-in $1.2 million for Disney/Marvel in its sixth week of release, just surpassing the $200-million mark in North America.

#GIVEAWAY: ENTER TO WIN A DOUBLE PASS TO THE TORONTO, OTTAWA AND MONTREAL ADVANCE SCREENINGS OF “ANCHORMAN 2: THE LEGEND CONTINUES”

It’s been a nine-year wait, but at long last beloved Media Icon Ron Burgundy will return to the Big Screen in ANCHORMAN 2: THE LEGEND CONTINUES! Paramount Pictures and Mr. Will Wong want to give Readers the amazing chance to win Passes to an Advance Screening of this hilarious Sequel  in Toronto (Cineplex Yonge & Dundas – 9:30 PM), Ottawa (Cineplex Colisseum – 7:00 PM) and Montreal (Cineplex Forum – 7:00 PM), on Monday, December 16, 2013.

With the ’70s behind him, San Diego’s top-rated Newsman, Ron Burgundy (Will Ferrell), returns to the news desk in Anchorman 2: The Legend Continues. Also back for more are Ron‘s Co-anchor and Wife, Veronica Corningstone (Christina Applegate), Weatherman Brick Tamland (Steve Carell), Man on the Street Brian Fantana (Paul Rudd) and Sports Guy Champ Kind (David Koechner) — all of whom won’t make it easy to stay classy… while taking New York’s first 24-hour News Channel by storm.

To enter to win, visit Mr. Will Wong on Facebook and under this corresponding Post, click “like” and tell us how why there is no Media Icon bigger than Ron Burgundy!  Share this Post on Facebook with your Friends or Re-Tweet the below and increase your chances of winning:
http://www.mrwillwong.com/anchorman2 @MRWILLW wants us to #win Passes to see#ANCHORMAN2 in #OTTAWA #MONTREAL and #TORONTO.  In theatres 12/18!
Good luck and stay classy, Wongsters.
Have you had a chance to play our GUESS THE MUSTACHE Challenge or try the ANCHORMAN 2 MUSTACHE MAKER in celebration of Ron Burgundy‘s triumphant return to the Big Screen?  More on that here!
Paramount Pictures release ANCHORMAN 2: THE LEGEND CONTINUES on Wednesday, December 18, 2013.
(Photo/video credit: Paramount Pictures)
anchorman christina applegate david koechner paul rudd steve carell will ferrell

Movember may be over, but Ron Burgundy certainly has us obsessing into the Holidays!   The beloved Media Icon who just stopped-off in Toronto last week, soon can be seen in ANCHORMAN 2: THE LEGEND CONTINUES.  In celebration of its release, we’re challenging you to guess these following Celebrity Mustaches, one of which belongs to Mr. Stay Classy himself!

Don’t have a hairy conniption now – I’ll give you some clues!

Pair the below names with the above famous Mustaches:

Also, have you had a chance to make your own Mustache yet?  Upload a Photo of yourself using the Anchorman 2 Mustache Maker and share with the Hashtag #ANCHORMAN2!  Try it here! 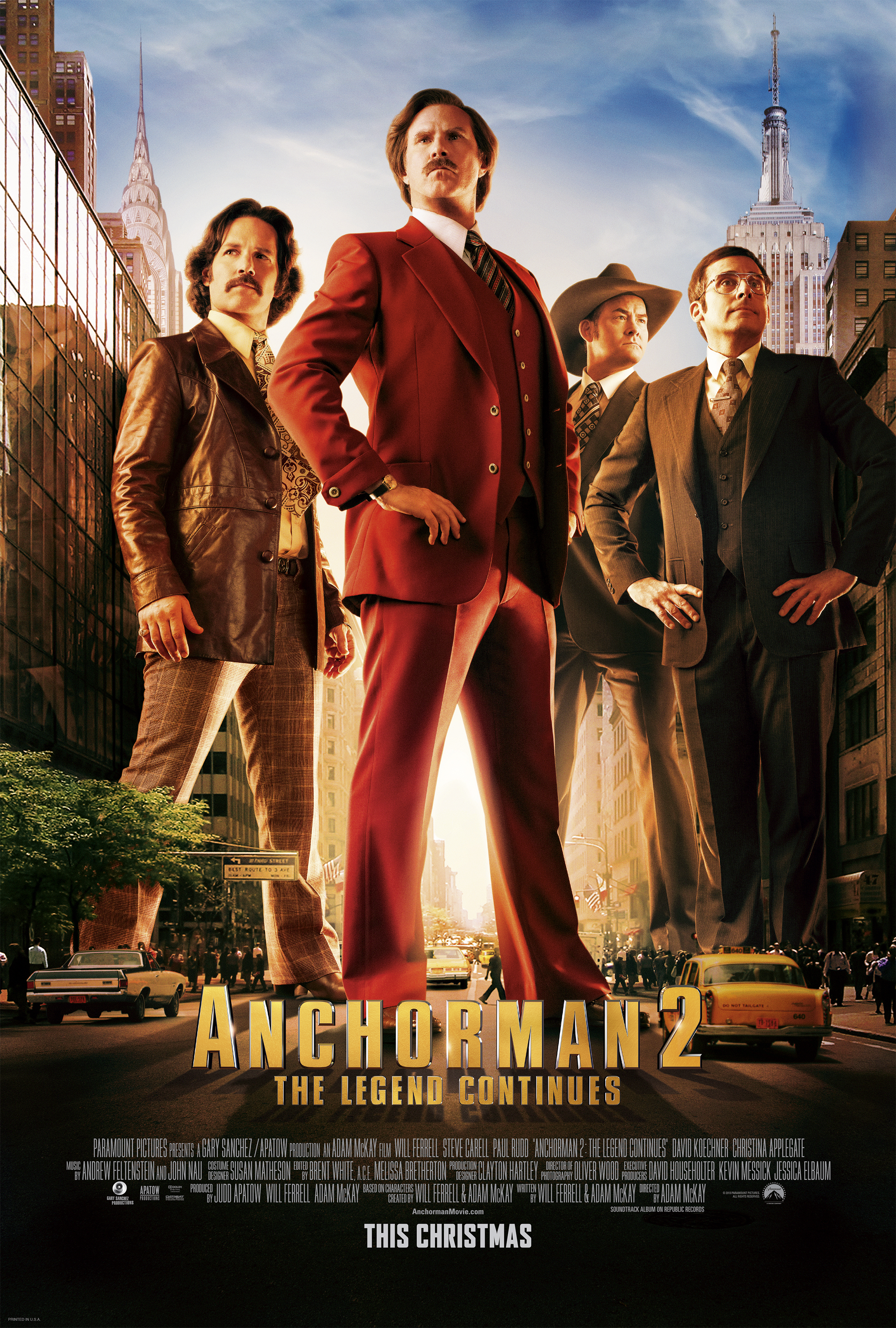 In case you haven’t yet been floored by it, see the Trailer for ANCHORMAN 2: THE LEGEND CONTINUES below:

Paramount Pictures are giving Anchorman 2 their full confidence with a Christmas release date to compete with some real heavyweights. Just released is this brand new Trailer for the long-awaited Sequel to the 2001 Box Office Hit.  The antics continue once again as San Diego’s favourite Newsman gets himself into more trouble here!