For a fourth straight week, FURIOUS 7 dominates the Box Office once again!  Showing at 3,808 theatres, the record-breaking Blockbuster earns $17 million this weekend, now for a cumulative total of $319 million domestically for Universal Pictures.

PAUL BLART: MALL COP 2 exceeds expectations, number two a second week in-a-row, earning $13.7 million for Sony Pictures. In its run so far, it has made $42 million in North America.

THE AGE OF ADALINE opens in third spot with $12.4 million for Lionsgate Films/eOne Films, despite topping the Friday night Box Office. The Romance starring Blake Lively gets an A- CinemaScore from Audiences, and a lukewarm 53% from Critics on Rotten Tomatoes.

HOME continues to show amazing staying power in fourth spot with $7.9 million. In five weeks it has made $153 million domestically for 20th Century Fox.

UNFRIENDED lands in fifth in its second week out with $5.9 million for Universal Pictures.

Well-reviewed EX_MACHINA debuts in sixth for Mongrel Media/A24 Films, wit $6.2 million from 1,255 theatres. The Sci-Fi Film starring Alicia Vikander, Domhnall Gleason and Oscar Isaac gets a stunning 90% on the Tomatometer.

WOMAN IN GOLD rounds-out the Top Ten with $3.1 million for The Weinstein Co./eOne Films.  In four weeks, it has grossed $21.2 million.

For a second straight week, FURIOUS 7 towers over the competition (which have some peculiarly suggestive names) with $62.7 million for Universal Pictures, good enough to surpass already the $250 million mark domestically in just TWO WEEKS!  The record for best second Box Office weekend for a Film previously was held by The Hunger Games with $58.5 million and a new mark has been set.

HOME lands in second this weekend, going strong still in its third week out with $19.7 million for 20th Century Fox.  Thus far, it has grossed $130 million in its run.

THE LONGEST RIDE  starring Scott Eastwood and Britt Robertson, opens a respectable third with $13 million for 20th Century Fox.  And while Critics failed to be charmed with a 29% on the Tomatometer, Audiences gave it a resounding ‘yes’ with a coveted A CinemaScore which could only help it in coming weeks as word of mouth spreads.

GET HARD finds itself in fourth spot in its third week out with $8.2 million for Warner Bros.  In three weeks, it has made $70 million already.

WOMAN IN GOLD is in seventh with $5.7 million, expanding to 1,504 theatres in it second week for eOne Films/The Weinstein Co.

KINGSMAN: THE SECRET SERVICE rounds-out the Top Ten with $1.2 million for 20th Century Fox in its ninth week out.  To date, it has grossed $125 million.

Hopefully its competition isn’t too ‘furious’! FURIOUS 7 accelerates to the top of the Box Office this weekend with a huge $150 million opening for Universal Pictures from 4,004 theatres across North America. This performance shows great horsepower, setting a Record for the Franchise in terms of its historical Opening Weekends and also largest pre-Summer bow for a Film release ever. Audiences genuinely were moved by the Film showcasing Star Paul Walker‘s final performance in the massively-successful Franchise, garnering an A CinemaScore. Critics meanwhile gave it a strong 82% on the Tomatometer.

After a one-week reign, HOME slips to second spot with $27.8 million for 20th Century Fox. It has grossed $96 million already in two weeks.

GET HARD get third spot this weekend with $13.5 million for Warner Bros. In two weeks it has earned $57.6 million domestically.

INSURGENT lands in fourth this weekend with $10 million in its third week out for Lionsgate Films/eOne Films, just ahead of another Box Office Champ in CINDERELLA, which places fifth with $9.6 million for Disney in its fourth week out.

WOMAN IN GOLD fares well in its limited release opening at 258 theatres for The Weinstein Co./eOne Films, debuting with $1.8 million.  Critics were tough on the Drama starring Ryan Reynolds and Helen Mirren, with a 49% on the Tomatometer.

THE SECOND BEST EXOTIC MARIGOLD HOTEL rounds-out the Top Ten with $1 million for Fox Searchlight, in its fifth week out.

#GIVEAWAY: ENTER TO WIN PASSES TO SEE “WOMAN IN GOLD”

WOMAN IN GOLD is the remarkable true story of one woman’s journey to reclaim her heritage and seek justice for what happened to her family. Sixty years after she fled Vienna during World War II, an elderly Jewish woman, Maria Altmann, starts her journey to retrieve family possessions seized by the Nazis, among them Klimt’s famous painting ‘The Lady in Gold‘. Together with her inexperienced but plucky young lawyer Randy Schoenberg, she embarks upon a major battle which takes them all the way to the heart of the Austrian establishment and the U.S. Supreme Court, and forces her to confront difficult truths about the past along the way. 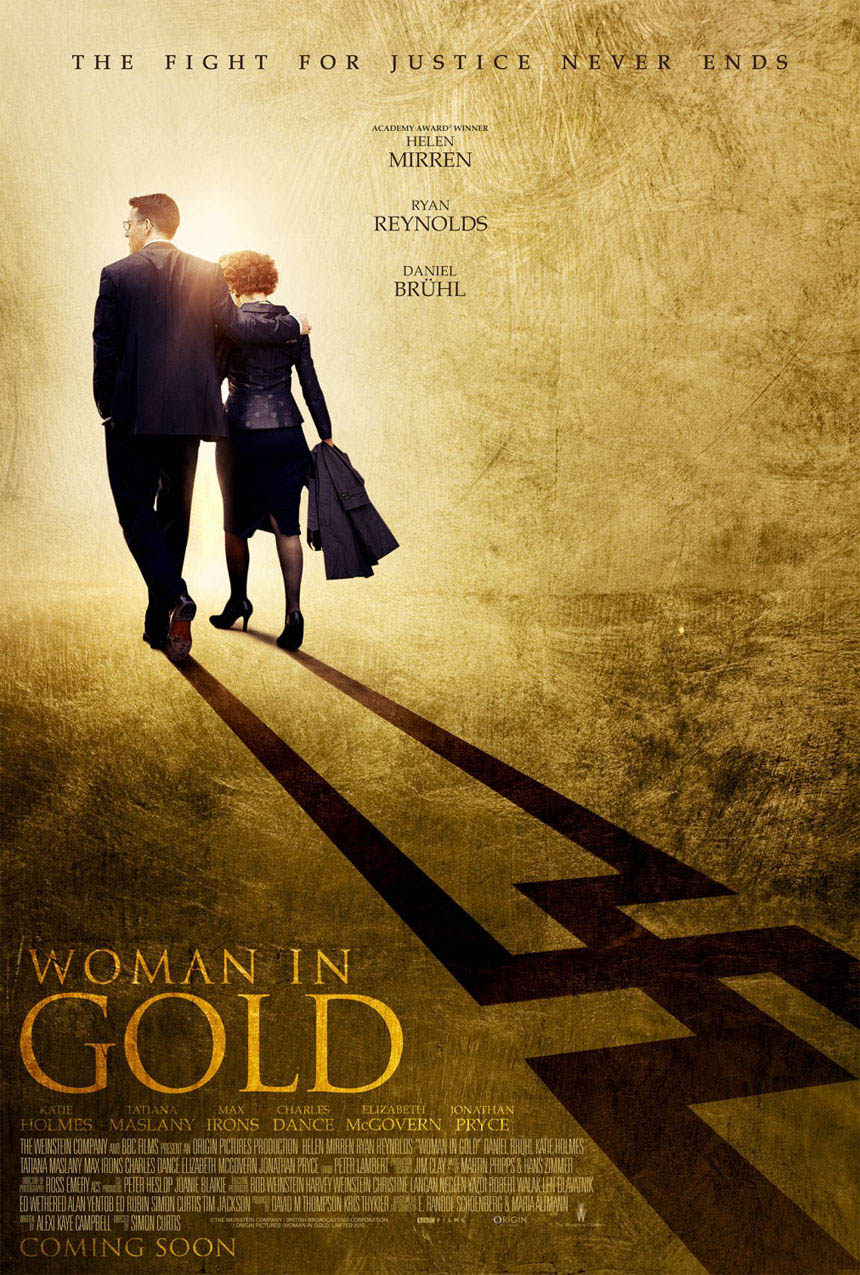