#GIVEAWAY: ENTER FOR A CHANCE TO WIN ADVANCE PASSES TO SEE “THE MENU”

Searchlight Pictures x Mr. Will want to give Readers a chance to win Advance Passes to see THE MENU.

A couple (Anya Taylor-Joy and Nicholas Hoult) travels to a coastal island to eat at an exclusive restaurant where the chef (Ralph Fiennes) has prepared a lavish menu, with some shocking surprises.

Enter for a chance to #win Advance Passes to see #TheMenu in Toronto, Vancouver and Montreal.

Chef Slowik (Ralph Fiennes) is a world-renowned chef who runs the ultra-exclusive Hawthorne restaurant that is located on its own island with a tasting menu that runs $1,250 per person. Among the guests is Tyler (Nicholas Hoult), a huge foodie, who has invited Margot (Anya Taylor-Joy) last minute to join him for the evening.

Spoiling what comes next would ruin the outrageous fun and bleak, biting Satire that courses through the veins of THE MENU. It takes jabs at the low-hanging fruit of the 1% and sets its sights on a number of other targets we know all too well. Of course, this is before things start going completely off the rails into directions and material you will never expect. Some may find many of the stops the Film makes to be shocking or in bad taste, but it is clear that Emmy-winning Director Mark Mylod intended on making a provocative piece of cinematic decadence – as well as a Film that will leave you incredibly hungry.

At the centre of it all is Taylor-Joy, who walks the tight rope of tonal absurdity with razor-sharp precision. She is our gateway into the madness of THE MENU, and she relishes in alternating between having the time of her life and being frightened for her life. And who knew she could be so witty? Just solid work all-around for one of our greatest talents. Equally solid is Hong Chau (also at the Festival with The Whale), who plays Slowik’s assistant Elsa. She gets many of the Film’s best lines and moments, each one delivered more deliciously wicked than the last. Hoult plays obnoxious weasel well and a whole slew of recognizable Character Actors do their very best keeping up the Film’s momentum.

These great elements would be completely meaningless though if it was not for Fiennes. He brings a next-level energy to his certifiably deranged performance, reveling in being astute and well spoken in one breath and batshit crazy in the next. There is an additive quality to his work here, packing-in as much poignancy as he does poisonous barbs. I would even go so far as to call this his best performance ever; one that is substantially more terrifyingly unhinged than even his legendary work as Lord Voldermort.

THE MENU screens as follows at TIFF ’22: Hot off her Academy Award win, Jessica Chastain alongside Ralph Fieness can be seen in TIFF ’21 selection THE FORGIVEN, coming soon to theatres.

The Forgiven takes place over a weekend in the High Atlas Mountains of Morocco, and explores the reverberations of a random accident on the lives of both the local Muslims, and Western visitors to a house party in a grand villa.

THE FORGIVEN opens across select cities in Canada:

#GIVEAWAY: ENTER FOR A CHANCE TO WIN PASSES TO AN ADVANCE SCREENING OF “THE KING’S MAN”

Walt Disney Studios Canada x Mr. Will want to give Readers a chance to win passes to an Advance Screening of THE KING’S MAN. Screenings take place as follows:

As a collection of history’s worst tyrants and criminal masterminds gather to plot a war to wipe out millions, one man must race against time to stop them. Discover the origins of the very first independent intelligence agency in “The King’s Man.”.  20th Century Studios‘ THE KING’S MAN opens in theatres on December 22, 2021.

The Red Band Trailer below:

Enter for a chance to #win passes to an Advance Screening of #TheKingsMan in Toronto, Vancouver and Montreal.

NOTE: Winners will only be reached from our official account. Do not accept friend requests from others asking for your personal information. Please guard your information carefully.

Wealthy couple David (Ralph Fiennes) and Jo (Jessica Chastain) are making their way to friend Richard’s (Matt Smith) lavish weekend party deep in the Moroccan Desert. On their drive, high-functioning alcoholic David hits a young Moroccan boy with his car, killing him. They arrive at the party with the boy’s dead body unsure of what to do. Soon, David finds himself with the boy’s father, on the way to the burial. While Jo and the rest of the privileged Western guests spend the weekend continuing to party, David is forced to confront his sins.

The Forgiven is a dark British Comedy with something to say. Writer-Director John Michael McDonagh creates laughs in the bleakest moments. This mostly excels due to the outstanding performance from Fiennes who delivers lines in a hilariously dry way. The Comedy has a purpose: to make the darker themes about privilege, Neocolonialism, forgiveness and judgement easier to swallow. For example, ignorant dialogue is said by Western characters about the Moroccan people. The comedy lands and the point gets across due to the powerhouse ensemble McDonagh has assembled.

The Cast is led by Fiennes who revels in playing pompous David. While David is on his journey to the burial he’s faced the truth of his sin and the pain it inflicted on the family. Chastain is great as the unhappy Jo who gets carried away at the party and commits a sin of her own. The talented Christopher Abbott, who plays flirtatious Tom, spends most of his time trying to seduce the intelligent Jo. These scenes are wonderful to watch because of the witty rhetoric and the chemistry they share. Rounding off the Cast is Smith who delights in playing lavishly wealthy Richard and Caleb Landry Jones who gives a memorable performance as Richard’s party-enthusiast boyfriend, Dally.

The Forgiven screens at TIFF ’21:

Check-out these brand-new stills from THE DIG, coming soon to Netflix!

As WWII looms, a wealthy widow hires an amateur archaeologist to excavate the burial mounds on her estate. When they make a historic discovery, the echoes of Britain’s past resonate in the face of its uncertain future‎. 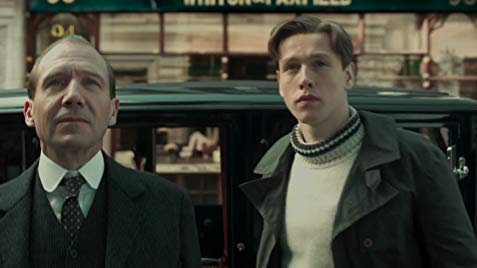 A new Trailer has surfaced for Kingsman Prequel, THE KING’S MAN.

SYNOPSIS:
As a collection of history’s worst tyrants and criminal masterminds gather to plot a war to wipe out millions, one man must race against time to stop them. Discover the origins of the very first independent intelligence agency in The King’s Man, directed by Matthew Vaughn.

Official Secrets tells the true story of British Secret Service Officer Katherine Gun (Keira Knightley). She released a private emailed memo about an illegal joint US-UK spying operation on the UN Security Council, leading up to the invasion of Iraq in 2003.

Writer-Director Gavin Hood has made a compelling Film about the inspiring Gun. Gavin depicts Gun as an ordinary woman who was able to do something extraordinary by putting herself and those around her in harms way to expose the truth. Hood has gathered an ensemble of talented actors consisting of Knightley, Matt Smith, Matthew Goode, Ralph Fiennes and more. All add richness to the inspiring people involved.

#FIRSTLOOK: TRAILER FOR “A BIGGER SPLASH”

I live for these tangled, juicy messes. After a debut at Venice last Fall, A BIGGER SPLASH is set to do as its name suggests with a stateside release in May.

The tranquility comes to an end when a Marianne‘s old flame, music producer Harry Hawkes (Ralph Fiennes), and seductive younger woman Penelope (Dakota Johnson), who may or may not be Harry’s daughter, arrive on the island and barge into the middle of the couple’s vacation.