We’re lucky to have even have had the chance to partake in any star-spotting this year given the circumstances we’ve been in! And even though what we got was a reduced version of TIFF ’21 this year, we’re still thrilled that talent still came through, while production on various Series and Films also continued around town this year. And as always we’re happy to go as close as the talent want to get, ensuring safety first. One day we’ll look back and call this our “Masked Era”.

While this is only a fraction of the quantity of star sightings we’ve had in the past, we did our best to do what we do safely. Some exciting names still passed through Toronto in 2021 and we were there!

I’d have to say it was epic that Toronto’s Simu Liu exploded onto the international stage as a mega star for his work in Marvel Studios’ SHANG-CHI AND THE LEGEND OF THE TEN RINGS. Not only was it amazing catching-up in person – he actually remembered my name – we also got a quick interview with him! Other names like Rebecca Ferguson, whom we’ve admire for quite a while, came through for TIFF ’21 and we’re glad we finally got to meet her properly! And when do we not get excited to see Jessica Chastain in-town? One of our highlights was getting a Selfie with Mila Kunis, whom we love, together with beanie bright and early in the AM? While concerts were scaled back quite a bit this year, we’re happy to have met some emerging names on the international scene who actually happen to be Canadian, like Mustafa the Poet and BBNo$! And how cool was it that hot off his venture into space, earning him the distinction of oldest person ever to go to space, William Shatner came to Toronto for Fan Expo Limited Edition?

See some of our favourite star sightings of 2021, in no particular order!

While we will wait a bit for these case counts to go down, we look forward to Toronto being the star-studded City it once was once again!

#SPOTTED: KEANU REEVES IN TORONTO FOR THE CANADIAN PREMIERE OF “THE MATRIX: RESURRECTIONS”

Toronto’s own Keanu Reeves got an epic welcome home tonight as the Black Carpet was rolled-out at Scotiabank Theatre for the Canadian Premiere of THE MATRIX: RESURRECTIONS. This fourth installment of The Matrix Series directed by Lana Wachowski, takes place some 20 years after the events of The Matrix Revolutions and we find Neo (Reeves) living an ordinary life, only to cross paths with a woman who appears to be Trinity (Carrie-Anne Moss). Joining a group of rebels, he must fight a new enemy and also find again his one true love, the “real” Trinity.

Reeves is in the thick of promotions for this eagerly-awaited Sci-Fi-Action Blockbuster, just having done the rounds in New York earlier this week. Special precautions were taken at the Premiere tonight allowing only select Media who had met testing and vaccination requirements access to the Black Carpet. And while these Premieres normally include a fan pit, extra precautions were made to clear the area for social distancing amidst these unique times. The venue also was bought-out completely with all 14 screens devoted to playing the Film. Outside and inside the theatre, elaborate projections of the Film’s iconic green digital rain where displayed in high-definition taking fans right back inside The Matrix. The Premiere was brought to us by Audi, The Fairmont Royal York Hotel and IMAX.

Moss originally was slated to attend the affair as well, but sadly couldn’t make it out. Nonetheless, Toronto fans were thrilled to see their pride and joy celebrate with them.

We were incredibly lucky to be seated right beside Reeves as he chat with Host Donovan Bennett about how great it is to be back and seeing this Film on IMAX.

We know many of you are so pumped about this! Check-out this brand-new Canadian Trailer for THE MATRIX: RESURRECTIONS!

From visionary filmmaker Lana Wachowski comes “The Matrix Resurrections,” the long-awaited fourth film in the groundbreaking franchise that redefined a genre. The new film reunites original stars Keanu Reeves and Carrie-Anne Moss in the iconic roles they made famous, Neo and Trinity.

Lana Wachowski directed from a screenplay by Wachowski & David Mitchell & Aleksander Hemon, based on characters created by The Wachowskis. The film was produced by Grant Hill, James McTeigue and Lana Wachowski. The executive producers were Garrett Grant, Terry Needham, Michael Salven, Jesse Ehrman and Bruce Berman.

We know many of you have waited so long for this. The new Trailer for THE MATRIX: RESURRECTIONS, in theatres for the Holidays!

From visionary filmmaker Lana Wachowski comes “The Matrix Resurrections,” the long-awaited fourth film in the groundbreaking franchise that redefined a genre. The new film reunites original stars Keanu Reeves and Carrie-Anne Moss in the iconic roles they made famous, Neo and Trinity.

Great news for the Holidays! Hollywood Suite will be available as a free preview for you from December 1, 2020 to January 5, 2021! Among the exciting things they have lined-up are a tribute to Keanu Reeves, a KEANUSSANCE and the second season of their series A YEAR IN FILM. As announced previously, HBO MAX series VALLEY OF TEARS also is coming to Hollywood Suite exclusively.

The series is inspired by the true events of the 1973 Yom Kippur War in Israel.

A YEAR IN FILM – SEASON TWO

The Hollywood Suite original documentary series A Year in Film explores how movies reflect the events, mood, politics, and culture of their time. A Year in Film immerses you in film history and pop culture with insights and movie memories from filmmakers, industry insiders, and critics. Season two dives into the films that shaped the years 1975, 1986, 1994 and 2000.

With Watergate and the fall of Saigon dominating the news, people were looking for an escape.

Celebrations like Vancouver’s Expo 86, Hands Across America and the passing of Halley’s Comet were tempered by the sadness of tragedies like Chernobyl, the Space Shuttle Challenger disaster and the uncovering of the Iran-Contra affair.

Films featured in A Year in Film: 1986 airing or On Demand in December:The Fly, Aliens, Top Gun, Platoon, Chopping Mall, Ferris Bueller’s Day Off, River’s Edge, The Decline of the American Empire, and Stand by Me.

Gen X controlled the narrative in a big way. While Hollywood struggled with the generation gap, independent films connected with mainstream audiences more than ever.

The dawn of the new millennium saw a mix of frustrations over a contested U.S. election and relief after Y2K fears fizzled. The film landscape seemed wide open for new and exciting voices to emerge.

Films featured in A Year in Film: 2000 airing or On Demand in December:Erin Brockovich, Traffic, Yi Yi, American Psycho, Ginger Snaps, In the Mood for Love, and Crouching Tiger, Hidden Dragon.

December is all Keanu, all the time. His name means “cool breeze over the mountains,” and he’s a well-rounded, well-loved, low-key Canadian guy who kicks ass and has serious acting chops. Raised in Toronto, his three-decade long filmography is prolific and filled with an alarming amount of Hollywood’s biggest blockbuster franchises. The cinematic homage to The One includes:

Check-out this brand-new Trailer for BILL & TED FACE THE MUSIC! Also it has just been announced that COMIC-CON@HOME will host a BILL & TED FACE THE MUSIC Panel moderated by Kevin Smith on Saturday, July 25 at 3 PM PST/6 PM EST. The panel will include Keanu Reeves, Alex Winter, Samara Weaving, Bridgette Lundy-Paine and William Sadler, as well as director Dean Parisot and screenwriters Chris Matheson and Ed Solomon.

The stakes are higher than ever for the time-traveling exploits of William “Bill” S. Preston Esq. and Theodore “Ted” Logan. Yet to fulfill their rock and roll destiny, the now middle aged best friends set out on a new adventure when a visitor from the future warns them that only their song can save life as we know it. Along the way, they will be helped by their daughters, a new batch of historical figures, and a few music legends – to seek the song that will set their world right and bring harmony in the universe. Bill & Ted Face the Music is directed by Dean Parisot (Galaxy Quest), from a screenplay by Chris Matheson and Ed Solomon (Bill & Ted’s Excellent Adventure, Bill & Ted’s Bogus Journey) – and produced by Scott Kroopf, Alex Lebovici and Steve Ponce.

Synopsis:
Once told they’d save the universe during a time-traveling adventure, 2 would-be rockers from San Dimas, California find themselves as middle-aged dads still trying to crank out a hit song and fulfill their destiny.

#FIRSTLOOK: BE A PART OF “BILL & TED FACE THE MUSIC”

This is your chance to be a part of BILL & TED FACE THE MUSIC! Film yourself, family, friends and even your pets rocking out with instruments – real or fake – or just the air guitar to the film’s demo track provided at https://www.partyonwithbillandted.com. The submission deadline for videos is May 20, 2020.

#FIRSTLOOK: “TOY STORY 4” ACTIVATION COMING SOON TO A CITY NEAR YOU!

Canadians across the country soon will have a chance to partake in an exciting celebration in advance of TOY STORY 4′s release! Want to see a life-sized replica motorcycle of Canada’s greatest stuntman, Duke Caboom (voiced by Keanu Reeves)? Want to make your own Spork just like Bonnie?. Wanna show it off in a Photo Op?

Synopsis:
Woody (voice of Tom Hanks) has always been confident about his place in the world, and that his priority is taking care of his kid, whether that’s Andy or Bonnie. So when Bonnie’s beloved new craft-project-turned-toy, Forky (voice of Tony Hale), declares himself as “trash” and not a toy, Woody takes it upon himself to show Forky why he should embrace being a toy. But when Bonnie takes the whole gang on her family’s road trip excursion, Woody ends up on an unexpected detour that includes a reunion with his long-lost friend Bo Peep (voice of Annie Potts). After years of being on her own, Bo’s adventurous spirit and life on the road belie her delicate porcelain exterior. As Woody and Bo realize they’re worlds apart when it comes to life as a toy, they soon come to find that’s the least of their worries.

eOne Films x Mr. Will want to give Readers a chance to win Advance Passes to see JOHN WICK: CHAPTER 3 – PARABELLUM Wednesday, May 15, 2019 in Toronto. One lucky winner wins a Prize Pack with T-Shirt, Key Chain and digital downloads of the first two JOHN WICK films! 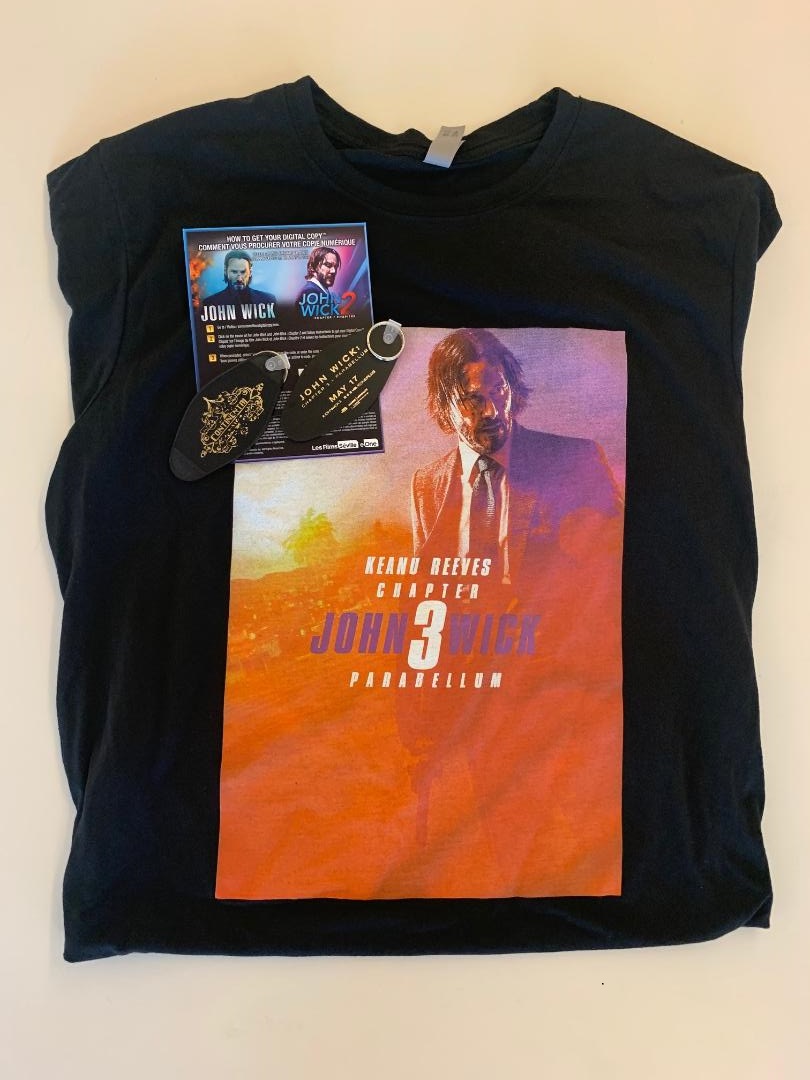 Synopsis:
Super-assassin John Wick (Keanu Reeves) is targeted by hit men and women everywhere after a $14 bounty is placed on his head for killing another member of the international assassin’s guild.

It doesn’t look like there’s any hope for him… the High table and the entire city want him dead. However, John reconnects with Sofia (Halle Berry), a former friend and hitwoman. The two join forces to help John save his life and fight his way out of New York City. 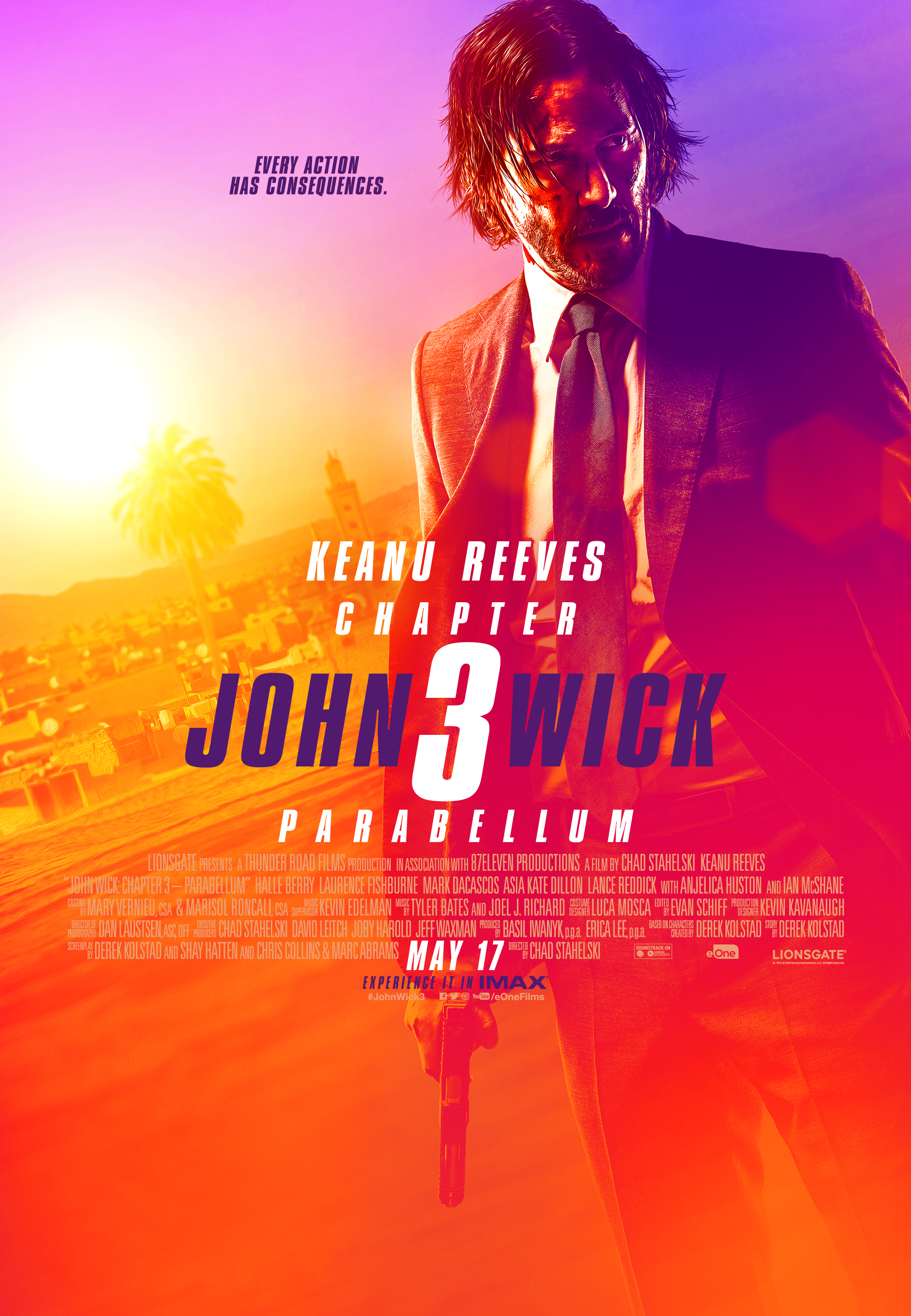