#SPOTTED: STARS AT THE WORLD PREMIERE OF “DR. CABBIE”

Amidst all the pre-Festival bustle, the Stars of brand-new Comedy DR. CABBIE kicked-off what surely will be a Parade of Stars in Toronto these next couple weeks! Drawing a large crowd of Supporters tonight along Richmond Street at Scotiabank Theatre, the new Film produced by Bollywood Legend Salman Khan and made in Toronto, is set to hit theatres late September.

Arriving fittingly in a Co-Op Cab, the Film’s three Leads Virmani, Nayyar and Kaif arrived to a warm reception from Fans, stopping to greet Fans along the barricades, a repeat of the fanfare seen outside Brampton SilverCity on Saturday night as a rumoured number of Fans in the thousands crowded for a glimpse of the Film’s Stars, namely its Megastar Producer Khan. Virmani was kind enough to greet the entire Red Carpet and especially took a moment out to thank us personally for our support for the Film. We’ve been keeping a tab on it since it began production here!

DR. CABBIE centers on a certified Physician named Dr. Deepak Chopra (Virmani) who moves to Canada, settling to make a living as a Cab Driver.  After successfully delivering a baby in the back of his Cab, he decidedly turns it into a mobile Clinic.

“Like” Dr. Cabbie on Facbeook to see the official Livestream of tonight’s World Premiere. 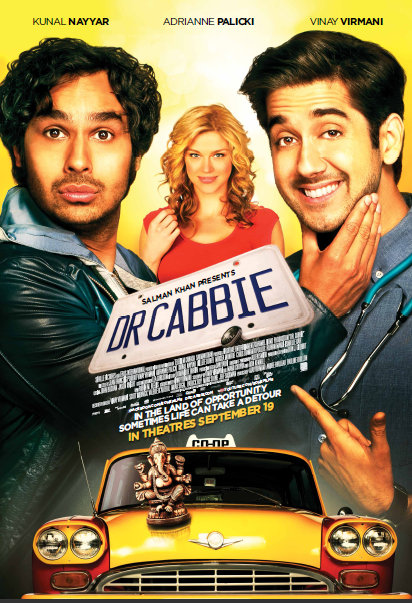 We’ve been pumped for DR. CABBIE since hearing of it being in production in Toronto last Spring. Well finally, an extended Trailer has surfaced for the Comedy which could well get a premiere at TIFF ’14!  Yahoo! Movies got the first look back in April and now here’s a more extensive look at what we can expect from Bollywood Heavyweight Salman Khan‘s first international Flick!

Official Synopsis:
An unemployed Doctor turned Cab Driver (Vinay Virmani) becomes a local Hero when he converts his Taxi into a Mobile Clinic. Dr. CABBIE is the heart warming journey of a young Indian Doctor who immigrates to Canada with the selfless ambition of healing others while beginning a new life in the land of opportunity. DR. CABBIE discovers his true purpose and true love when he embarks upon this journey of a Doctor turned Cabbie.