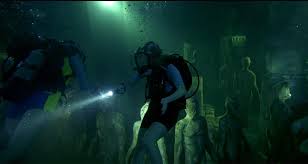 In 2017 Johannes Roberts made 47 Meters Down and it was received better than anticipated, a genuinely thrilling Shark Movie. Forward to today, Roberts and Co-Writer Ernest Riera are back with 47 Meters Down: Uncaged, and it is exactly what audiences could hope for in a film from the genre – suspenseful and having you on the edge of your seat, concicse and to the point. And of course some bloody shark violence, which is what everyone came for, no?

The Movie focuses on stepsiblings Nicole (Sistine Rose Stallone) and Sasha (Corrine Foxx) as well as Sasha’s friends Alexa (Brianne Tju) and Mia (Sophie Nelisse). Nicole’s dad Grant (John Corbett) signs Sasha and Nicole up to see sharks in the natural habitat on a glass boat ride in an effort for the two to bond. We are led to believe the new mixed family are brought to Mexico due to his work. When being dropped off at the boat loading area, Alexa and Mia show up and convince Sasha, who convinces Nicole to ditch and explore an underwater cave that Alexa is aware of. This is where things start to pick up, as they explore the underwater Mayan caves, some unwanted visitors show up and after some misfortunes occur, they’re now in the fight for their lives to return to the surface.

What makes 47 Meters Down: Uncaged work is its quietness and Roberts‘ mastery of suspense. Most of the Movie is calm underwater,  but the second you see the silhouette of a shark, anxiety levels rise instantaneously. And with some of these characters being not so likeable,  you more likely than not find yourself rooting for the characters attacked. Stallone, Foxx, Tju and Nelisse play teenagers, first to act and second to think, the Film examining the dynamic of peer pressure. The four Actresses work perfectly well together, giving audiences a 14A entry into the genre .

Get your popcorn ready, 47 Meters Down: Uncaged is a blast with the perfect amount of preposterous fun.