The annual Cinefranco Film Festival is the Mecca for all those, like myself, who love and gravitate towards French language cinema and don’t have many opportunities to see them on a big screen with English subtitles. Founded 22 years ago by the charismatic Marcelle Lean, the festival offers outstanding movies from France, Quebec and Morocco to name just a few. I recently had the honour of having lunch with the dynamic Ms. Lean to discuss this year’s fest and see some of the films that will be showing this year from November 22-30 at the Hot Docs Ted Rogers Cinema.

Marcelle Lean’s enthusiasm and knowledge of cinema is infectious and hearing the issues attaining rights for films to be screened at Cinefranco (such as this year’s offering of the Cannes winner by the Dardenne brothers, LE JEUNE AHMED) fascinating. When asked if there was theme for this year’s Festival, Ms. Lean replied that many movies centered on the concept of family. She fought diligently, and succeeded, to get the rights to films she was impressed with and spoke passionately about some of the movies that be at this year’s Festival, which include the Closing Film from Quebec, ANTIGONE, the funny coming-of-age Comedy VENISE N’EST PAS EN ITALIE from France and MADE IN CHINA, also from France. 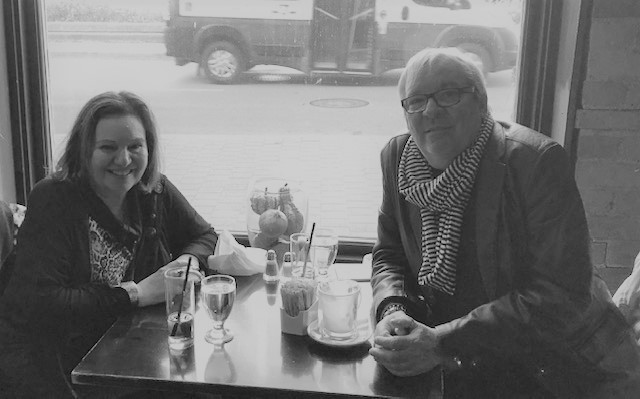 From what I have seen so far, and those that I definitely want to see during the fest, CINEFRANCO 2019 offers an outstanding array of French language diverse gems that will appeal to all with francophone sensibilities!

UN AMOUR IMPOSSIBLE
Spanning five decades and narrated by the daughter of the lead characters, Rachel and Philippe (played brilliantly and ferociously by Virginie Efira and Niels Schneider respectively) this unabashed love story transcends the genre. Romantic and sensual then shocking and heartbreaking, it is powerful and evocative. And it’s a must-see.

EDMOND
Set in 1897 against a background of Parisian architectural glories (the Moulin Rouge, Le Comedie Francais), this charming, madcap romp about the creation of the classic play Cyrano de Bergerac is wildly funny and entertaining. The performances by everyone in EDMOND is captivating and letter A perfect as is the glorious cinematography. You will be hard pressed not to be in tears by the end of this Movie and applaud as vigorously as the audience does in this movie when Cyrano ends. I loved it.

L’ADIEU A LA NUIT
Showcasing Catherine Deneuve’s best performance since 8 WOMEN and featuring a primarily all Arab cast, the compelling drama touches on a variety of themes that include religious extremism and rhetoric as well as unwavering faith and familial love. Set on a horse farm, replete with cherry blossom trees, the visuals (which include La Deneuve wearing flannel plaid shirts!) are stunning and the story line is brisk and persuasive.

PERILS
A rarity, as it is a French language movie set in Toronto, the Film’s Creator, Jean-Marc Lariviere, effectively and efficiently tackles a number of thought provoking issues (that include the recent war in Syria and refugees) in its scant 27 minute running time. This is a respectable achievement.

DERIVE
Set in the Montreal area, this contrived and, at times, overwrought family melodrama that include a mysterious death of a parent and two teenaged girls coping with various issues may stretch the limits of interest, but there is no denying the commendable, naturalistic performances by all involved.

LE MYSTERE HENRI PICK
When a novel, allegedly written by a dead pizza maker with no history of writing, becomes a bestseller, television literary critic becomes obsessed of uncovering what he feels is a conspiracy to fool the public. It is a standard issue mystery movie laced with comedic incidences but watching veteran actor, Fabrice Luchini, with his OCD ticks is sheer joy.

More on Cinefranco 2019 here including line-up and how to get tickets.