I live for this Festival!  TIFF  ’14 Day One has arrived at long last and what an eventful day it was.  I appreciate everyone taking the time to tune-in to CP24 for my Interview with Stephen LeDrew!  As always, it’s a blast contributing every year and I’m honoured to be asked to help-out again this year.  Catch me throughout the Festival and visit their official website for some of my exclusives!

In case you missed it, my Interview can be streamed here. 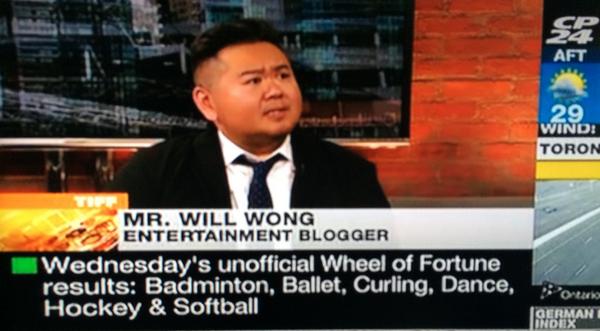 Thanks Steve Neville for the Capture!

The Carpet tonight was absolutely crazy for The Judge, the Drama sees Robert Downey Jr. play a Big City Lawyer who returns to his hometown to learn that his Father, a Judge, stands accused of Murder!  Stars Dax Shepard (and Wife Kristen Bell!), Vera Farmiga and Robert Duvall also graced the Roy Thomson Hall Carpet.  One lucky young Man dressed as Iron Man even got a Photo Op with Downey!  More pics to come tomorrow of the Cast, but here’s one of Downey greeting Fans.  He was spotted afterward at Ivan Reitman‘s new Restaurant, Montecito although Fans and Media were barred access seeing the Cast’s arrivals.

French Star Juliette Binoche always is a Vision and it was amazing seeing her up-close over at the Princess of Wales Theatre.  The Actress stars alongside Kristen Stewart (absent tonight) in the Drama about an aging Actress’ struggles and her Friendship with her Assistant.  See a Snap below of Binoche greeting Fans.

Everyone doubted me but here’s proof for your own eyes. TOM HARDY IS IN TOWN!  I was one of the few lucky ones who got a Snap of him tonight.  The Actor stars in The Drop, known as the late James Gandolfini‘s final performance on-screen.  The New York-filmed Movie sees Hardy as a Bartender caught between the Mafia and what’s right.  As anticipated, he was amazingly gracious and those who are following know he was my #1 this Festival. I’m on Cloud Nine.

As if things couldn’t get any better, we also spotted the brilliant Melissa McCarthy who stars alongside Bill Murray in St. Vincent.  Although it took the Bridesmaids Star a while to confirm, she eventually made it.  She was exhausted but made an exception for a quick Snap. I’m dying.

As always, we LOVE a good Giveaway!  How about an authentic signed TOM HARDY Photo?

Want it?  Simply click  “like” on the Post with that Signed Tom Hardy Photo over at Mr. Will Wong on Facebook to enter!  All are welcome.  Now’s the time to let all your Friends in on Toronto’s best-kept Secret!

This is just a taste of what’s to come, my Willionaire$.  Keep checkin’ back and be following on Social Media for more excitement!

Photos were taken on the Nikon D3300 and uploaded via the Galaxy Tab S!