Mindy Kaling finally has blessed us with her brilliant Screenwriting talents on the big screen. True to brand, her Script is smart and hilarious with an enormous amount to say about social issues. Kaling has created characters who represent where we are in a timely manner and the casting is perfection. Thompson knocks it out of the park as the brutally honest Katherine. Her layered and delightfully-comical performance will be remembered. She is surrounded by an outstanding Ensemble, including the forever lovable Kaling, Dennis O’Hare, John Lithgow, Reid Scott and Hugh Dancy. Late Night is without a doubt a runaway smash!

#GIVEAWAY: ENTER FOR A CHANCE TO WIN ADVANCE PASSES TO SEE “DADDY’S HOME 2”

Synopsis:
In the sequel to the 2015 global smash, father and stepfather, Dusty (Mark Wahlberg) and Brad (Will Ferrell), have joined forces to provide their kids with the perfect Christmas. Their newfound partnership is put to the test when Dusty‘s old-school, macho Dad (Mel Gibson) and Brad’s ultra-affectionate and emotional Dad (John Lithgow) arrive just in time to throw the holiday into complete chaos. 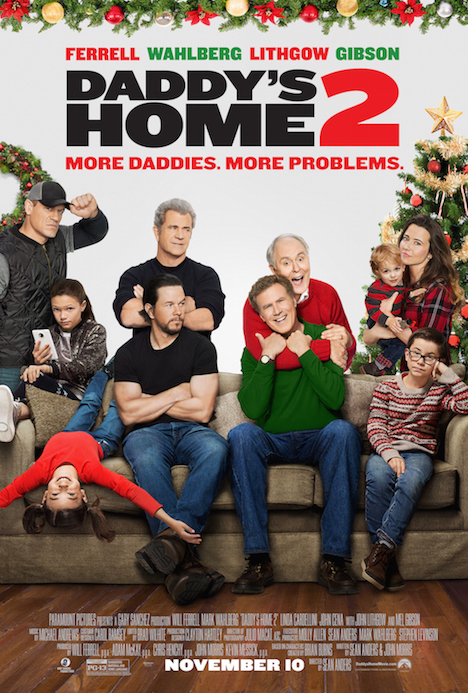 I absolutely love my new Bowtie, a promo piece designed by Ira Sachs, Director of LOVE IS STRANGE, and his Husband Boris Torres. It was inspired by iconic New York City Gay Bar, Julius.

In case you haven’t seen it yet, LOVE IS STRANGE is an important Love Story on Same-Sex Marriage stars Alfred Molina and John Lithgow, out now on Home Video!

Synopsis:
From celebrated independent filmmaker Ira Sachs (Keep the Lights On), LOVE IS STRANGE follows Ben (John Lithgow) and George (Alfred Molina), who finally tie the knot after nearly four decades together among family and friends. But when George loses his job soon after, the couple must sell their apartment and temporarily live apart until they can find an affordable new home. The film also stars Cheyenne Jackson (Behind the Candelabra), Manny Perez (“Rescue Me”), Darren Burrows (“Northern Exposure”), Academy Award® winner Marisa Tomei (Best Supporting Actress, My Cousin Vinny, 1993) and Charlie Tahan (Blue Jasmine).

Ties are available in three styles:
· The Sachs-Torres is inspired by the iconic gay bar, Julius in New York City’s West Village, in which a poignant scene from the film is set. It features interlocking, stylized “J”s with a light blue base and various shades of pink, expressing a collaboration between Ira and his husband Boris Torres.

· Inspired by his character Ben and his love for art, The John Lithgow features bold, abstract combinations of colors similar to the styles of Jackson Pollock and Willem de Kooning.

· Inspired by his character George, a music teacher, The Alfred Molina features Frédéric Chopin, whose music scores the film, finished in the colorful style of an Andy Warhol piece.