For a fifth year, the Joe Carter Classic Golf Tournament took place earlier today at the Eagles Nest Golf Club in Maple, Ontario.  The Event brought together 40-plus Celebrities in Sports and Entertainment, with proceeds going to the Children’s Aid Fund.  Since 2010, the Joe Carter Scholarship Fund and Joe Carter Family Support Fund have raised more than $1 million towards  prevention of Child Abuse and education for those affected by it. Many of us know Joe Carter as the Baseball Player who guided the Toronto Blue Jays to a 1993 World Series victory with a walk-off Homerun.

The Afterparty certainly was the place to be tonight at Shangri-La Hotel in Toronto as Partygoers and Media filled the Red Carpet to the brim for a chance to see charismatic Hollywood Star Charlie Sheen – a dear Friend of Carter’s – and his Fiancée, Brett Rossi. The Actor after doing interviews head straight to a roped-off section of the Party Room where he was seen close and tight with Rossi.  By the end of the night, he was drinking Cranberry-Vodka right out of the Bottle Service Flask.  Sheen sure knows fun!

We chat with quickly with Carter, dapper in Strellson, about what inspired him to pour his heart into this cause. “I was lucky to come from a Family with a Mother and a Father who supported me though my whole career”, he tells me. “And these kids come from broken homes so they don’t have that opportunity and it’s not their fault. So if we can help them and show them someone really cares about them – gives them an opportunity maybe they  can be successful like I was successful.”.

Partygoers were delighted by some ’90s-licious Throwback performances from Biz Markie who got the party going with a dynamite rendition of his Smash Hit, Just a Friend.  Iconic Hip-Hop Group Salt-n-Pepa despite having split and reunite, made their Fans super-happy as they zipped through a 30-minute genre-bending Set which saw them perform their biggest Hits like Whatta Man (joined by Carter!), Push It, Shoop, Let’s Talk About Sex and Covers of Guns N’ Roses Sweet Child o’ Mine and Nirvana’s Smells Like Teen Spirit!

He’s a Star of the Ice, and today he was a Star of Ice… Cream!  The Toronto Maple Leafs’ Alternative Captain Joffrey Lupul was turning-up the heat over at the Magnum Pleasure Shop (11 Bloor Street West) today, doing a round of Interviews on premises.  Shortly after 12:00 PM the doors were opened and a flood of Fans, primarily Female and dressed in their Leafs jerseys, came through the Shop getting a chance to meet the #19 Hunk.  Make no mistake though, Fans big and small were accommodated as he graciously signed hats and jerseys for his youngest Supporters first.

Lupul is a Man of taste and as a fellow “Pleasure Seeker”, he dishes to me what he likes on his own customized Magnum Ice Cream Bar.  “I put Maple Canadian Fudge, Popcorn and Chocolate on mine!”, he tells me as a crowd of Fans inched closer towards him.

Those of you who haven’t had a chance yet to check-out the Pop-Up Shop will be thrilled to know that based on its overwhelmingly positive reception (there are Line-ups out the door daily!), it will remain open now till the end of August.   Even that still is not long enough as several hoping the Pleasure Shop will become a permanent fixture in the City. Myself included.

What did I put on my Ice Cream Bar?  My taste buds went into overdrive with my combination of Sea Salt, Dark Chocolate, Coconut, Macadamia Nuts, Almonds and Chili Flakes, topped with a few Parisian Macaron Crumbs.  Did I mentioned the real Gold Flakes sprinkled on top?  TDF. To die for! 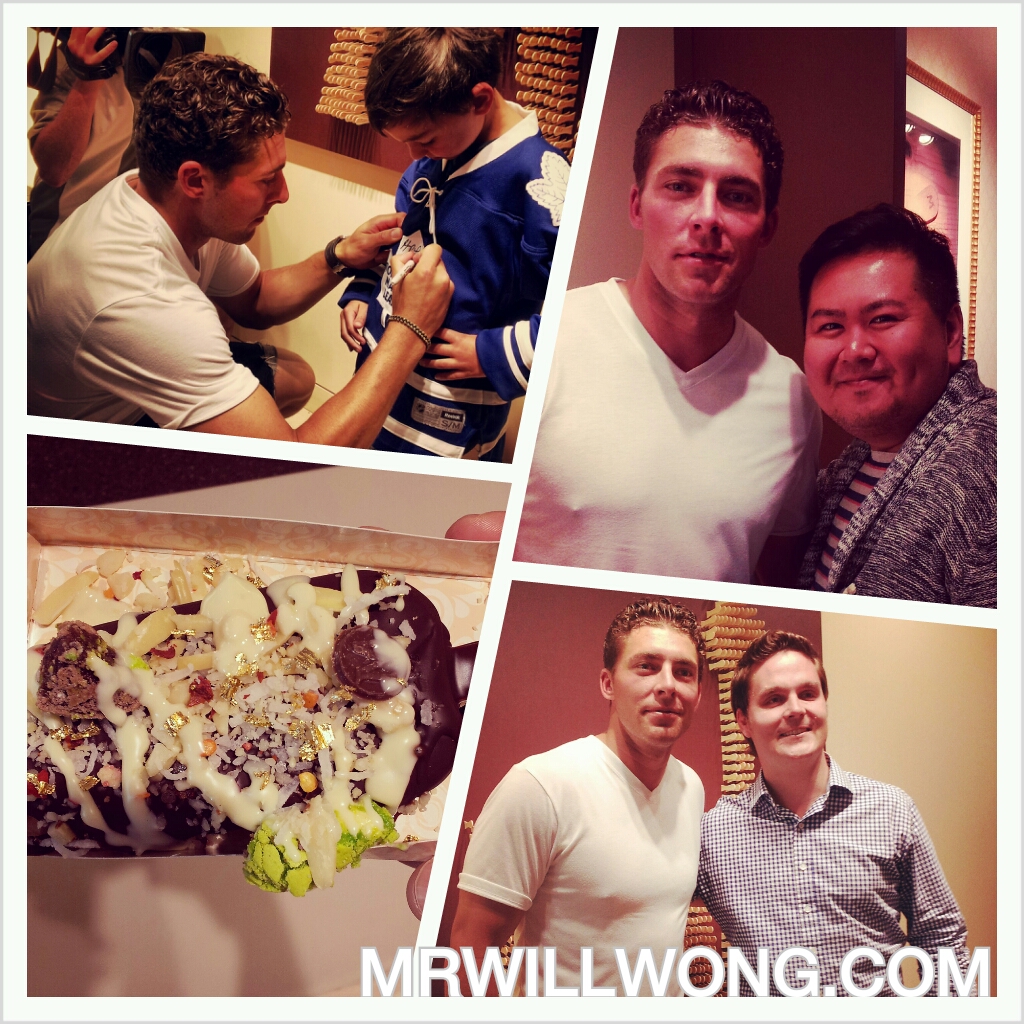 See more of the recent Stars to visit the Magnum Pleasure Shop: