Just like its 2016 Predecessor, FANTASTIC BEASTS AND THE CRIMES OF GRINDELWALD debuts atop the Box Office with $63.5 million from 4,163 theatres for Warner Bros. It gets only 40% on the Tomatometer and a B+ CinemaScore, while that last Film in the Franchise opened with $74.4 million, besting this new instalment.

THE GRINCH continues to be highly-bankable for Universal Pictures, slipping to second spot this weekend with an stellar $38.2 million.  Its two-week tally comes to $126.5 million domestically.

BOHEMIAN RHAPSODY lands in third with $15.5 million for 20th Century Fox, a total $127.6 million in its third week out.

In fourth is new release INSTANT FAMILY starring Mark Wahlberg and Rose Byrne with $13 million from 3,286 theatres for Paramount Pictures. It gets both a 80% on the Tomatometer and an A CinemaScore, which  might give it some longevity heading into U.S. Thanksgiving.

WIDOWS opens in fifth with $11.9 million for 20th Century Fox from 2,803 theatres. The Film from Oscar-winning Filmmaker Steve McQueen, gets an outstanding 91% on the Tomatometer, but oddly only a B CinemaScore.

NOBODY’S FOOL rounds-out the Top Ten with $2.1 million, a total $28.7 million it its domestic run for Paramount Pictures.

Synopsis:
When Pete (Mark Wahlberg) and Ellie (Rose Byrne) decide to start a family, they stumble into the world of foster care adoption. They hope to take in one small child but when they meet three siblings, including a rebellious 15 year old girl (Isabela Moner), they find themselves speeding from zero to three kids overnight. Now, Pete and Ellie must hilariously try to learn the ropes of instant parenthood in the hopes of becoming a family. INSTANT FAMILY is inspired by the real events from the life of writer/director Sean Anders and also stars Octavia Spencer, Tig Notaro and Margo Martindale. 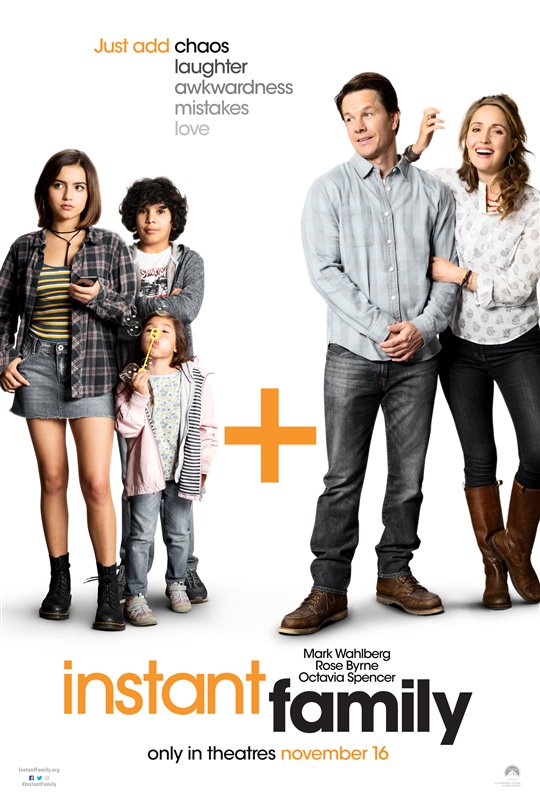