#FIRSTLOOK: NEW TEASER FOR “AWAY”

Two-time Academy Award winner Hi\lary Swank is back in AWAY, coming soon to Netflix! See the Teaser Trailer:

From Executive Producer Jason Katims, the Netflix series Away is a thrilling, emotional drama on an epic scale that celebrates the incredible advancements humans can achieve and the personal sacrifices they must make along the way. As American astronaut em>Emma Green (Hilary Swank) prepares to lead an international crew on the first mission to Mars, she must reconcile her decision to leave behind her husband (Josh Charles) and teenage daughter (Talitha Bateman) when they need her the most. As the crew’s journey into space intensifies, their personal dynamics and the effects of being away from their loved ones back on Earth become increasingly complex. Away shows that sometimes to reach for the stars, we must leave home behind.

AWAY arrives on Netflix Friday, September 4, 2020.

As someone who has personally experienced the insidiousness of Alzheimer’s Disease, WHAT THEY HAD is one of the few movies that features the day to day horrors one is subjected to. When Ruth (a terrific, yet underutilized Blythe Danner) is found in the hospital after wandering the streets of Chicago on a snowy winter night clad only in her nightgown, her son Nick (Michael Shannon, exceptional as always) calls his sister in California, Bridget (Hilary Swank, wonderfully-vulnerable yet strong) to fly in to discuss putting their mother in a treatment home much to the objections of their father Burt (Robert Forester in an awards worthy performance).

Occasionally laced with much needed humour, WHAT THEY HAD is a compelling study of the disease and the family dynamics. My issue with the Movie is that there are way too many conflicts that this family deals with, with flashbacks to boot. That aside, this is a must-see.

Blythe Danner Hilary Swank tiff WHAT THEY HAD

Trying to reverse a family curse, brothers Jimmy (Channing Tatum) and Clyde Logan (Adam Driver) set out to execute an elaborate robbery during the legendary Coca-Cola 600 race at the Charlotte Motor Speedway. 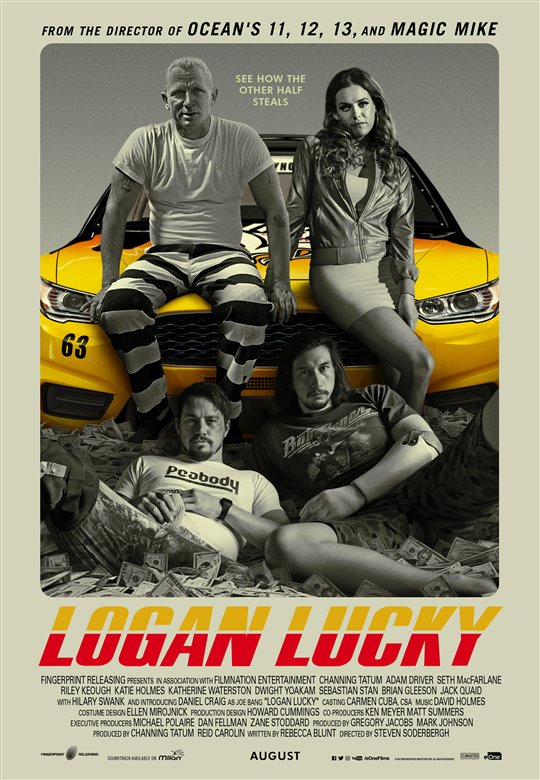 This is Daniel Craig like you’ve NEVER seen him. All all-star cast highlights LOGAN LUCKY! Check-out this brand-new Trailer!