GONE GIRL certainly isn’t going anywhere. For the second week in-a-row, the David Fincher Thriller tops the North American Box Office with $27 million from 3,014 theatres. The Accolades keep pouring-in for the Film, which gets a head start on its competition in the Awards Trail.

Debuting in second spot is DRACULA UNTOLD, earning $23 million for Universal Pictures from 2,887 theatres. Critics were  harsh on the Film, giving it 26% on the Tomatometer, while Audiences had positive things to say about it with an A- CinemaScore. Gary Shore directs this take on the classic Vampire Story, with Luke Evans and Toronto’s Sarah Gadon starring.

ALEXANDER AND THE TERRIBLE, HORRIBLE, NO GOOD, VERY BAD DAY opens in third for Disney with $18.2 million from 3,088 theatres. Critics and Audiences alike had fairly positive things to say about this Family Comedy starring Steve Carell and Jennifer Garner earning a 62% on the Tomatometer and an A- CinemaScore respectively.

After opening in second last weekend, the Horror ANNABELLE slips to fourth spot this weekend for Warner Bros. with $15.2 million from 3,215 theatres.

THE JUDGE, which had the distinction of being the TIFF ’14 Opening Night Gala, opens in fifth with $13.1 million from 3,003 theatres. The Warner Bros. Drama starring Robert Downey Jr. and Robert Duvall, got great reviews from Audiences with an A- CinemaScore but Critics thought otherwise with a 47% on the Tomatometer.

ADDICTED opens in seventh spot for Lionsgate Films with $8.4 million from only 846 theatres. The Drama starring Tyson Beckford and Sharon Leal has yet to open in Canada just yet. Critics gave it a paltry 11% on the Tomatometer.

MEET THE MORMONS rounds-out the Top Ten for Purdie Films with $3.3 million from 317 theatres. The Documentary which does not have Canadian distribution has a 0% rating on the Tomatometer. 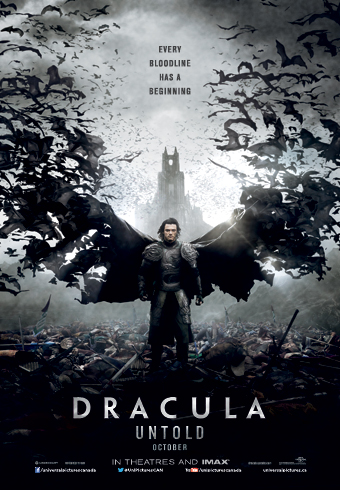 To enter to win, simply click “like” on this Post at Mr. Will Wong on Facebook and tell me in the comments section after watching the Trailer why you think Dracula turns to darkness!