Cineplex Events is celebrating the accomplishments and 62nd birthday of an icon, Tom Hanks this July! See once again on the big screen some of Hanks’ greatest hits including Big (30th Anniversary), A League of their Own, Apollo 13 and Forrest Gump and fall in love with these classics all over again!

Tickets at participating Cineplex theatres is $6.99 only or $5.00 for three or more Movies!

Cineplex presents once again the FLASHBACK FILM FEST, bringing out faves onto the big screen one more time! Taking place at theatres across Canada between Friday, February 2 through Thursday, February 8, 2018.

Films this year include: Monty Python and the Holy Grail, Gremlins, The Terminator, Back to the Future, The Big Lebowski, Edgar Wright and Simon Pegg’s Cornetto Trilogy (Shaun of the Dead, Hot Fuzz and The World’s End) and more!

Check back, like in previous years we might even be able to hook you up with some goodies for the Festival!

For more on the FLASHBACK FILM FEST, click here!

#SPOTTED: KELLY BISHOP OF “DIRTY DANCING” IN TORONTO FOR CINEPLEX’S ONE NIGHTERS

The stunning and elegant Kelly Bishop was in Toronto today to launch Cineplex One Nighters, which brings fan favourites back to the screen in a VIP setting for an amazing $10, leaving you with some money maybe for a cocktail? Bishop had a full day or Press visiting several Television and Radio outlets including CBC’s Q, CITY‘s Breakfast Television and CP24 Breakfast.

The TONY Award-winning Actress who originated the role of Sheila in A Chorus Line, is known best for her roles on Gilmore Girls as Emily Gilmore and iconic Dirty Dancing as Marjorie Houseman, ringing-in the latter’s 30th anniversary. Upcoming titles in the Series include Clueless (September 11, 2017), Mean Girls (October 3, 2017) and Bad Moms (October 23, 2017).

Prior to treating a sold-out audience at Cineplex Yonge & Eglinton VIP tonight with a special Q&A, Bishop walked the carpet looking fantastic in an understated black dress and some gold accessories. Flawless!

Support still is very ardent for Bishop, who on Instagram has over 140k followers and she was so gracious to take a quick minute to chat with some fans at the theatre, some who came with memorabilia to be signed, some simply starstruck snapping photos of her on their phones as she chat with CTV‘s The Social.

(Swipe left!) The stunning and elegant #KellyBishop in Toronto tonight to launch Cineplex #OneNighters, which brings fan favourites back to the screen in a VIP setting for an amazing $10. Bishop, known best for her roles on #GilmoreGirls and iconic #DirtyDancing, also is ringing-in the latter’s 30th anniversary. Upcoming titles in the Series include Bad Moms, Mean Girls and Clueless. For more: https://www.cineplex.com/Events/OneNighters.

For more on CINEPLEX ONE NIGHTERS, visit: https://www.cineplex.com/Events/OneNighters. 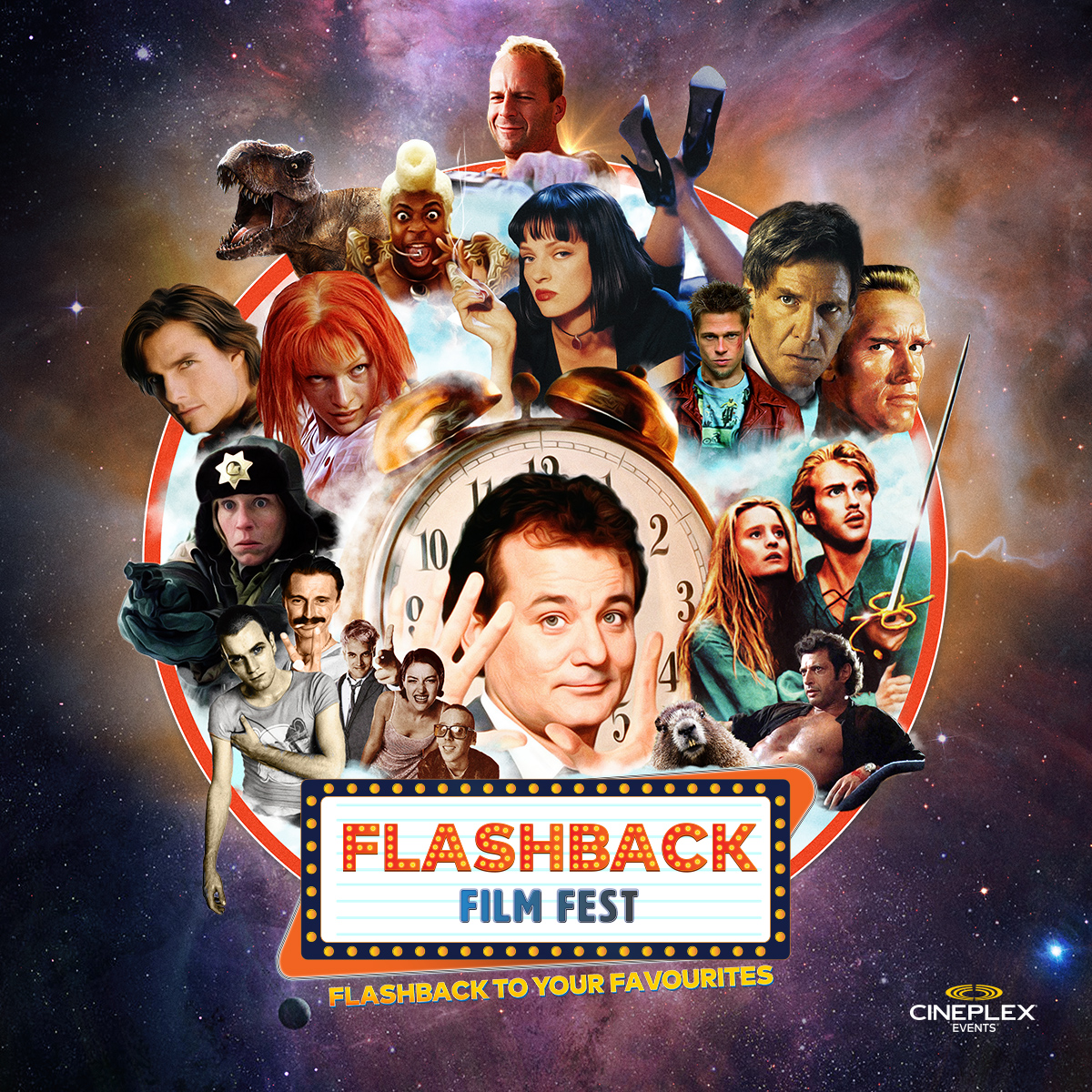 We know you guys love Movies and now we want to give Willionaire$ across Canada  chance to see their Cult, Sci-Fi and Action favourites in DIGITAL! Cineplex‘s GREAT DIGITAL FILM FESTIVAL takes place between February 5-11, 2016 at theatres across Canada.  It now is in its successful seventh year!

Tickets are only $6.99 per Movie with additional savings the more Movies you see.

Head over here for more details and participating theatres!

What favourite are you looking forward to seeing again?

Join the conversation on Twitter, by using the Hashtag #GDFF2016!

Back for a seventh year, Cineplex‘s GREAT DIGITAL FILM FESTIVAL takes place between February 5-11, 2016 at theatres across Canada. #GDFF2016, as it is hashtagged, gives Film Lovers across the land a chance to see their Sci-Fi, Fantasy and Cult faves again with perfect digital precision!

See a Sizzle Reel for the upcoming Festival:

Tickets are only $6.99 per Movie with additional savings the more Movies you see. Head over here for more details and participating theatres!

If you’ve been to a Cineplex to see Movie over the Holidays this year, you’ve probably at some point seen this touching short titled Lily & the Snowman. Unsure what I was watching, I literally thought I was watching a Disney short. It was that good!

The short follows Lily, who as a young girl shares plenty of heartwarming moments with her Snowman, preserving him in a freezer as he whittles away year by year until eventually she grows older and the responsibilities of life take over. Sometimes we lose sight of the person we once were.

The Snowman is metaphorical of anything that means something to you. A piece of your childhood that you miss. A pet that you loved. A friend you lost touch with. A family member you wish was still here.

I was moved to tears even before the Movie I went to see had started and knew I had to look for it on YouTube as soon as I got home. Please watch it below. You won’t regret it.

Last night, I was incredibly-lucky to experience a Holiday Classic at the new VIP Cinemas at Cineplex Yonge-Eglinton. First off, when I heard that Yonge-Eglinton was getting the VIP treatment, I was skeptical about screen size mostly because the theatre seemingly already used all the space it had…or so I thought. Thankfully, I was wrong and the spacious new VIP area  actually is beyond stunning, located just across from the concession area and in a secluded VIP area for a nice night out with some friends or a significant other.

Most notably different about Yonge-Eglinton VIP unlike others of its kind in Greater Toronto is that there are two designated dining areas. The first area, right when you walk in is an ambient bar/lounge area with a comfortable seating area, a beautiful view of bustling Yonge-Eglinton and a dozen or so bar tables that seat four for a quick drink before the cinematic escape begins. Upon walking down the stairs towards the cinema, there is another eating area and this is for the guests who wish to have more than an appetizer or a drink and enjoy an actual meal before or after their Movie. The area is nice and secluded, which is perfect for a cozy date night.

Secondly, the theatre size is truly remarkable. Similar to Yonge-Dundas and Don Mills, the screens are a sized generously, similar to screens we’ve come to enjoy at other Cineplex locations.  As well, the cushy seating heightens the experience just that much more. If you have ever experienced the VIP at Don Mills, Auditoriums 1 and 2 are the most comfortable due to the completely reclining theatre chairs. However, in Cinemas 3, 4 and 5, only the front two rows recline and sitting that close is not for everyone. Thankfully though, the new VIP at Yonge-Eglinton has fully-reclining chairs in all three auditoriums to bring the ultimate luxury and relaxation to the cinema viewing experience.

As well, the menu items and drink selections were quite delicious and had a vast variety of options. From Shrimp Cocktail to Pulled Pork Sandwiches to Poutine, offerings you’d want pre/post Movie was accessible… and flavourful. There is no better way to enjoy a Movie than in a comfortable, reclined seat, with popcorn in one hand and wine in another.  Yonge-Eglinton VIP will be getting the most in-demand titles starting with Creed, Hunger Games and Star Wars Episode VII: The Force Awakens, giving us a refined way to enjoy the season’s best.

Would you have guessed BRANGELINA would have lasted as long as they have? Cineplex Entertainment soon will be celebrating the 10-year anniversary of the Film that brought together Hollywood’s top Power Couple, Brad Pitt and Angelina Jolie!

In a survey conducted among Canadians, we are pretty divided on Brangelina‘s most memorable moment:

For one night only, Cineplex Entertainment across Canada will for one night be screening MR. & MRS. SMITH Sunday, June 22, 2014.  Don’t miss your chance to see that electric chemistry once more on the Big Screen!

Check your local listings for showtimes!

Marking its 25th Anniversary this year, Batman will be fêted at the Cineplex‘s The Great Digital Film Festival.  The Film Festival which focuses on Sci-fi, Action and Cult Films, will run in this City for a week beginning Friday, January 31, 2014 and ending Thursday, February 6, 2014.  Canadian Cinema Lovers will get a chance to see their Favourites on the Big Screen again or for the v. first time!

Above this, Touchwood PR and Mr. Will Wong are thrilled to give Readers a chance to win  Tickets to The Great Digital Film Festival and also a Copy of The Essential Batman Encyclopedia (seen above)!  The Paperback by Robert Greenberger gives Fans exclusive details about the origin of Batman, Artwork and Biographies of every major Character in his Universe.