Back in January 2012, I had the opportunity to do a bit of work on $180-million mega-opus from Director Guillermo del Toro, Pacific Rim.  I was incredibly honoured to do work days on the Production as a Background Performer. I was unemployed at the time, having lost a job I had for many years and always dreamed of being in a Movie, so, why not?  Because we had signed Confidentiality Agreements, details we weren’t permitted to be disclose any details until filming had completely fully.  After holding on this post for over 22 months, finally I can talk about my experience!

Cast in the role of an Engineer, I learned first-hand how much work can go into filming just one scene, let alone an entire Film.  Some days began as early as 5:30 AM, while ending as late as 10:30 PM.  Now if you think that’s a long day, know that some of the Crew are required to arrive even earlier and to stay later to set-up and pack-up.  Having  worked a 9 to 5 job with a cushy seat, I appreciate just how spoiled I was. A non-unionized Background Performer makes a v. minimal amount of money and endures gruelingly long days.

The futuristic Sci-Fi/Action Flick, taking-up a majority of the eight stages at Toronto’s Pinewood Studios, pits Humans and Robots up against Apocalyptic Monsters, rising from beneath the Pacific Ocean.  A majority of the Film appears is shot against a Green Screen and is F/X-heavy. Set Design is fascinating and intricate – “mechanical” and “martial” are words I would choose to describe it all.   Much of the Film is set on a Compound off the Pacific Ocean shores, with hoards of Labourers working at a feverish pace to build Robots, which ultimately will be piloted by Soldiers to fight-off the destructive Enemies.  Stacker Pentecost (Idris Elba) leads the Charge, declaring a War to cancel the Apocalypse.  Working under him in the fight are Right-hand Man Herc Hansen (Max Martini), Australians Raleigh Antrobus (Charlie Hunnam), Yancy Antrobus (Robert Kazinsky) and Mako Mori (Rinko Kikuchi).  There even is an adorable and talented English Bulldog named Max joining the fight too!

I admit my greatest struggle in being someone who loves snapping Photos of everything, was having to restrain myself this time.  The rules were v. clear – snapping a Photo would have me escorted off-set. Despite witnessing  many magical moments among the Cast, I was determined to do what was right and keep that Blackberry in my pocket.  Instinctively, I’d reach-in and want to grab it when I saw the Actors pranking one another and consciously I had to make an effort to tell myself not to do it.  It was torture. Hence I am left with words only to describe magical moments like when Sons of Anarchy Star Hunnam repeatedly trying to get a rise out of Oscar-nominated Actress Kikuchi telling her, “How about you get up and start doing some work for once?”.  Of course, he was kidding. If anything, of all Cast Members the British Thespian certainly was friendliest and one Background Performer even got to help relieve his back pain with a massage and chill-out in his Trailer.
As much as I would have loved to approach Golden Globe Winner Elba for a Photo the four times we passed each other in the hall going to the Bathroom, it was the right thing just not do it.  Believe me, you are hearing this from the King of “May I please get a Photo with you?”.  Work is work and I was determined not to get the boot!  As always, I have my ways and a month later I got my  moment with him off-set and had the pleasure meeting most of the Principal Cast in the duration Pacific Rim filmed in our City.
Getting to witness Elba as an Artist in his element is something I will never forget.  It was like attending the Dress Rehearsal of a Concert.  His focus is intense and always between takes he was in rehearsal mode.  In what will be one of the defining moments of Pacific Rim where he declares, “Today we cancel the Apocalypse!”, you would never believe the amount of work that went into making that just right.   To put it into perspective, imagine having to keep that level of focus in Kate Hawley‘s (The Hobbit) heavy and intricately-designed armour, delivering take after take, while dealing with one’s own fatigue in the heat on what already was an exceedingly long day.  The first day it just wasn’t happening and the end seemed more distant, the more we tried. On the second day, Elba nailed it in one take and we all applauded because well, he was that good.  Even though that said take was mostly dependent upon him and his delivery, our role as Onlookers had a bearing too in creating that perfect harmony. Collectively, we nailed it.  “That was good!”, one Performer dressed as a member of the Navy says to me with a nudge, as the entire room lets out a sigh of relief.
del Toro is a Master of his Craft and a consummate Perfectionist.  I appreciate this even more seeing him at work. His eye for detail is unparalleled, knowing exactly what he wants from each scene, regardless how many tries it takes.  In one scene he noticed me moving awkwardly and had an Assistant Director come over to coach me. It was discouraging being told I wasn’t moving naturally! I also recall one day when we Background Performers were required to run in a panic across slippery, wet floors and after multiple tries, he squeezed that one final  ounce of effort from us. “I know you’re tired and want to go home but now, I want you to run like your ass is on fire!”, which of course brought as much laughter as it did motivation,  “This spoken like a true Mexican!”.  One young Man took it a bit too literally perhaps, running so hard he collided into another, slipping and appearing to dislocate his shoulder.  For a moment we all looked-on in horror with a gasp before he was treated with urgency by Staff.  It was a long day and del Toro called it a day after that.  Like a Trooper, that young Man arrived back on-set again the next day.
Making Movies requires a great degree of discipline, focus and patience this is something I knew but finally really “got”. My first couple days on-set I admit were grueling and I recall getting home with aching feet, ready to conk-out.  Even more daunting was that I’d have to wake-up again at an obscene hour again the next morning – we’re talking pre-Subway early.  On the inverse though, there also are was one day I remained on Standby pretty much the entire time as the Assistant Director didn’t feel others and I fit into the scene.
Over what seemed like an endless supply of PB & J Sandwiches in our Trailers, it was inspiring getting to know some who were there to make a quick buck and others who aspired to complete the 1,600 hours necessary to gain their Union Apprenticeships as Actors.  And after seeing the delicious meals that came out of the Unionized Actors’ Craft Services Trailer, I couldn’t blame them!  Two consecutive days of charred Meatballs are enough to push anyone to get ahead.  I kid!  I met a Violinist from Russia who did Background Work to feed her Family and met also several Veterans who had obtained their Apprenticeships,  doing this full-time.
I always love to share and you’ll be pleased to know that I’m giving my Readers the chance to win Autographs from the Cast of Pacific Rim!  This Set includes authentic Signed Photos from Charlie Day, Rinko Kikuchi, Idris Elba, Charlie Hunnam and Guillermo del Toro.  To enter to win, simply click “like” on this Post at Mr. Will Wong on Facebook.  Share this Post on Facebook or Re-Tweet the below to double your chances:
http://www.mrwillwong.com/pacificrim @MRWILLW wants us to #win Photos signed by the Cast of #PacificRim. In theatres 7/11 at 7 PM! 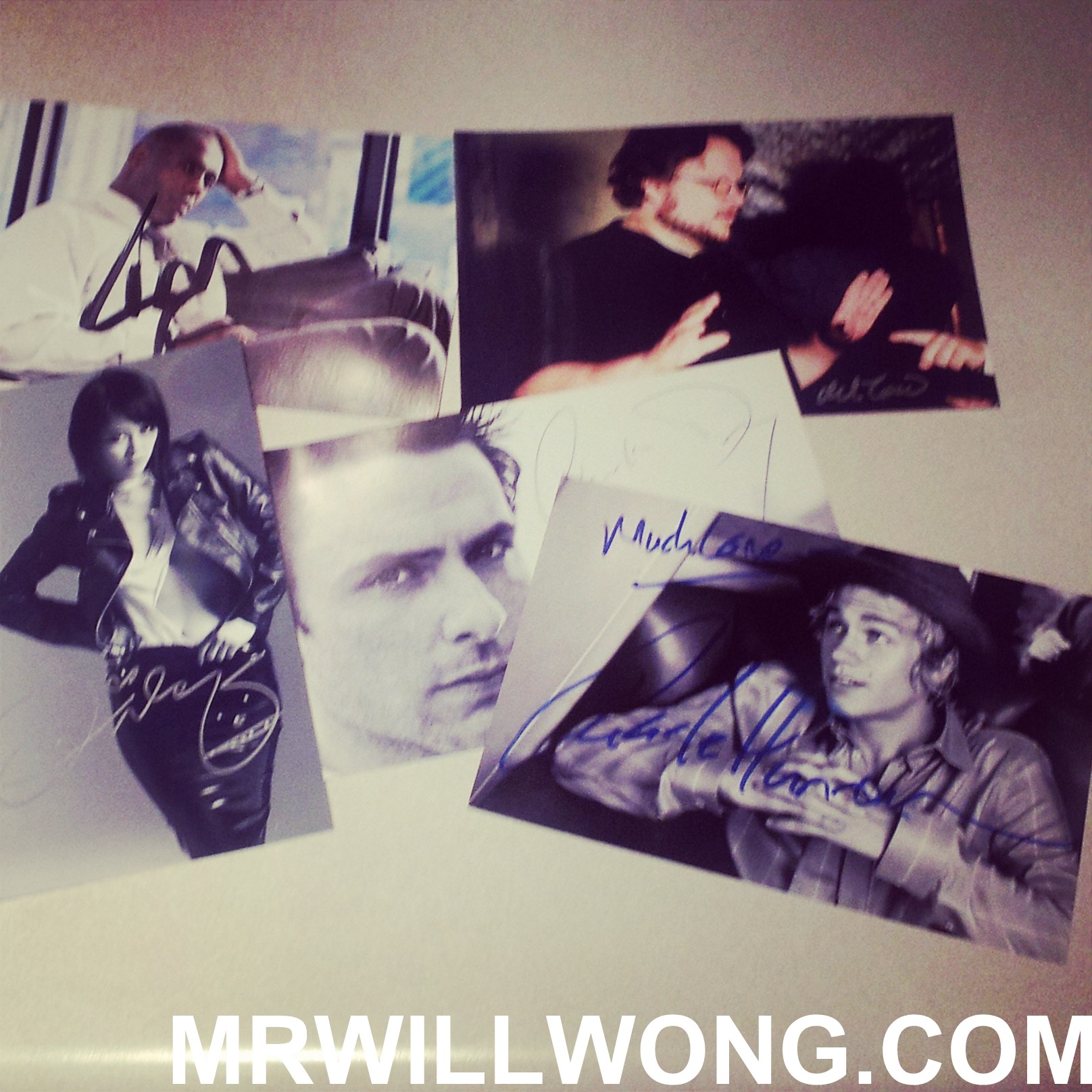 For all the days and hours I put into Pacific Rim, my guess is that all that work amounts to one quick moment on-screen, but it all was worth it.  Warner Bros. releases Pacific Rim this Thursday, July 11, 2013 at 7:00 PM.
(Photo credit: Mr. Will Wong)
burn gorman charlie hunnam guillermo del toro idris elba max martini pacific rim rinko kikuchi robert kazinsky