A v. healthy weekend at the Box Office, but alas THOR: RAGNAROK remains triumphant a second straight week. The latest in the Marvel Franchise earns $56.1 million in week two from 4,080 theatres, a total $209.1 million grossed thus far in North America.

In second is 20th Century Fox‘s MURDER ON THE ORIENT EXPRESS with $27.9 million from 3,331 theatres domestically.  The Agatha Christie Adaptation with a star-studded cast gets 58% on the Tomatometer from Critics and a B CinemaScore.

DADDY’S HOME 2 opens in third narrowly edged-out for second, with $27.5 million from 3,575 theatres for Paramount Pictures. It gets 16% on the Tomatometer from Critics and an A- CinemaScore. It’s 2015 Predecessor debuted with $37 million by comparison.

A BAD MOM’S CHRISTMAS is in fourth in its second week out for STX Entertainment/eOne Films with $11.6 million. Thus far it has tallied $39.9 million.

Acclaimed TIFF ’17 selection LADY BIRD rounds-out the Top Ten with $1.7 million for A24 Films/Elevation Pictures in its second week out, expanding to just 37 theatres across North America.

eOne Films x Mr. Will want to take Readers to an Advance Screening of A BAD MOMS CHRISTMAS!

A BAD MOMS CHRISTMAS follows our three under-appreciated and over-burdened moms (Amy, Kiki and Carla) as they rebel against the challenges and expectations of Christmas in hopes of creating a more perfect holiday for their families. And if that was hard enough, they have to do all of that while hosting and entertaining their ultimate holiday foes: their own mothers. By the end of the journey, our moms have redefined how to make the holidays special for their families and it ends up bringing them closer to their own moms. 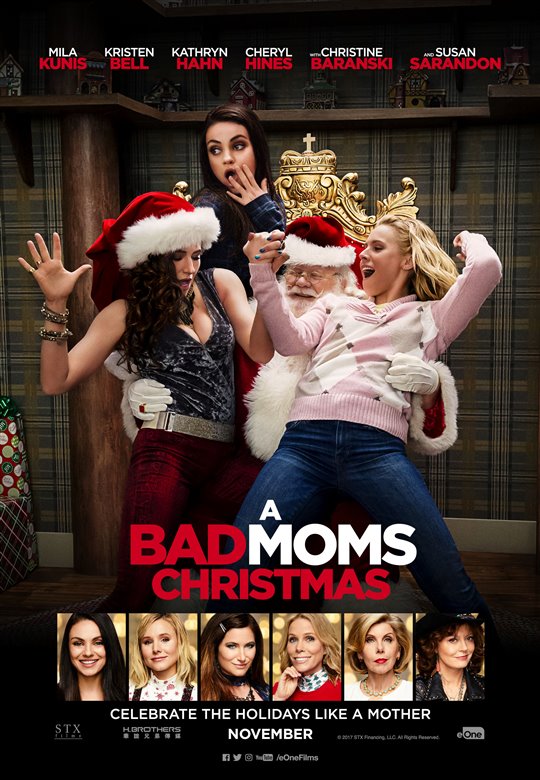 SUICIDE SQUAD very much is alive and well in its debut at the Box Office with a stunning $146 million opening for Warner Bros. from 4,255 theatres. In addition to garnering the distinction of being the highest August opening ever for a Film, it also ranks second behind CAPTAIN AMERICA: CIVIL WAR as the second highest opening Film of 2016! Critics were harsh with a 26% on the Tomatometer, but Audiences gave it redeeming B+ CinemaScore.

A distant second is JASON BOURNE with $22 million in its second week out for Universal Pictures.  It has made $102 million so far domestically.

BAD MOMS does great in third with $14.1 million for STX Entertainment and eOne Films in its second week out. It has just surpassed the $50 million-mark.

THE SECRET LIFE OF PETS is in fourth with $10 million for Universal Pictures.  In five weeks it is on the verge of $320 million in North America.

NINE LIVES opens in fifth with $6.6 million for EuropaCorp/VVS Films, from 2,264 theatres. Critics were harsh on the cat-human bodyswap Comedy with a 5% on the Tomatometer but it interestingly gets a really solid B+ CinemaScore.

ICE AGE: COLLISION COURSE rounds-out the Top Ten with $3.9 million for 20th Century Fox, in its third week out.

#BOXOFFICE: “JASON BOURNE” BIRTHS ANOTHER #1 FOR ITS FRANCHISE

JASON BOURNE takes the top of the Box Office in its debut, continuing its Franchise’s legacy of success with $59 million from 4,026 theatres for Universal Pictures. In relation to its Predecessors, it still cannot surpass the $69 million opening of 2007’s THE BOURNE ULTIMATUM but is second best, firmly ahead of 2005’s THE BOURNE SUPREMACY. Critics gave it a 56% on the Tomatometer, but Audiences loved it with an A- CinemaScore.

After dominating last weekend, STAR TREK BEYOND takes second position with $24 million for Paramount Pictures. In two weeks, it has grossed $105 million in North America.

Opening in third for STX Entertainment and eOne Films is BAD MOMS with $23.7 million from 3,215 theatres. The Comedy starring Mila Kunis, Kathryn Hahn and Kristen Bell gets a strong A CinemaScore, while Critics gave it a passing 63% on the Tomatometer. This definitely will help give it legs to go on in coming weeks.

THE SECRET LIFE OF PETS still is going strong in fourth with $17 million for Universal Pictures. Over four weeks it is almost at the $300 million-mark.

ICE AGE: COLLISION COURSE is in fifth with $10.9 million for 20th Century Fox, a total of $42 million in two weeks.

LIGHTS OUT continues to be the “little engine who could”, powering along in sixth with $10 million for Warner Bros. Made for less than $5 million, the Horror is now en route to $42 million in earnings.

NERVE opens in ninth with $9 million for Lionsgate Films/eOne Films. Since its opening Wednesday it has made $15 million. Critics gave it a 56% on the Tomatometer, while Audiences gave it an A- CinemaScore.

CAFÉ SOCIETY rounds-out the Top Ten with $2.4 million from only 565 theatres for Lionsgate Films/Amazon (a rare partnership) and Mongrel Media. The Woody Allen Film get a 71% on the Tomatometer.

eOne Films + Mr. Will want to take Readers on a girls’ night out to see Mila Kunis, Kristen Bell and Kathryn Hahn  in BAD MOMS!  Screenings take place as follows:

Synopsis:
In this new comedy from the writers of The Hangover, Amy has a seemingly perfect life – a great marriage, over-achieving kids, beautiful home and a career. However she’s over-worked, over-committed and exhausted to the point that she’s about to snap. Fed up, she joins forces with two other over-stressed moms on a quest to liberate themselves from conventional responsibilities – going on a wild, un-mom-like binge of long overdue freedom, fun and self-indulgence – putting them on a collision course with PTA Queen Bee Gwendolyn and her clique of devoted perfect moms. 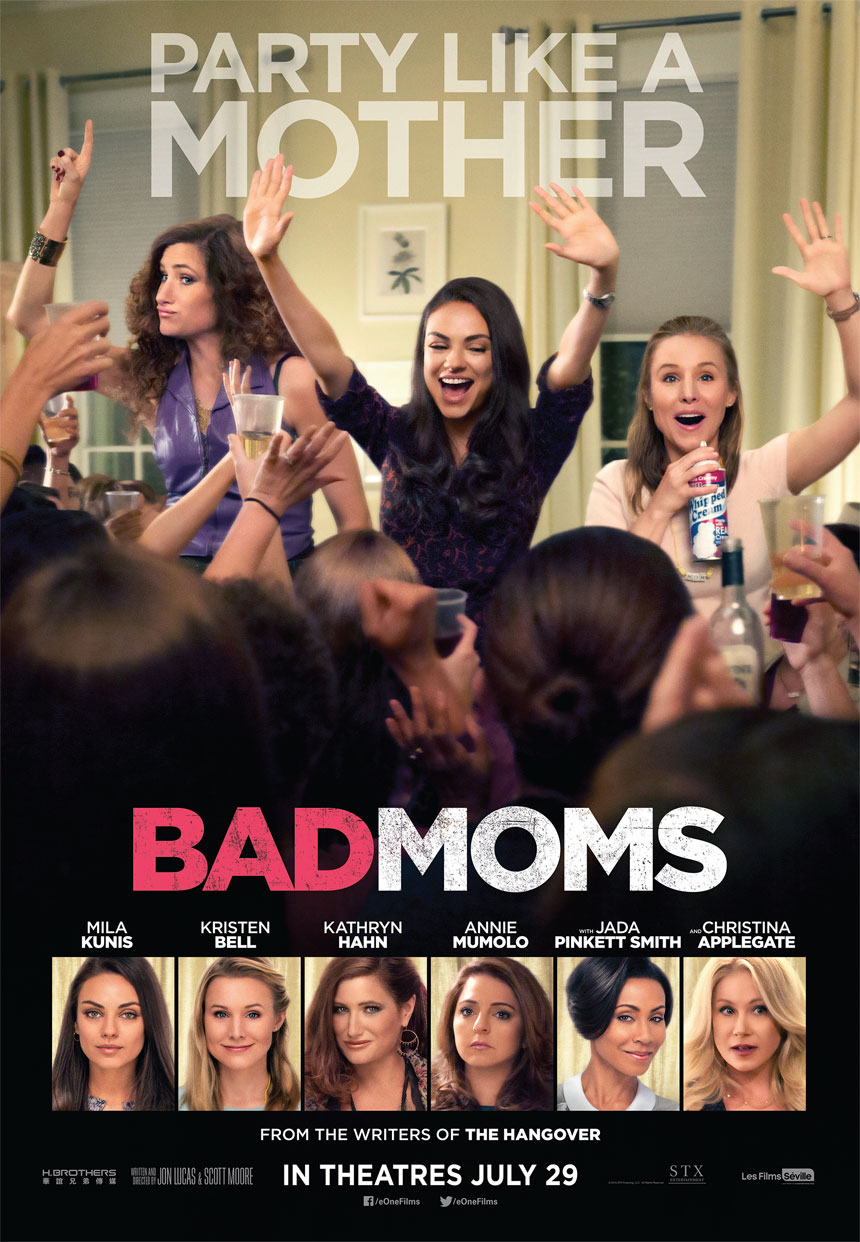 We cannot wait to see this. Mila Kunis. Kathryn Hahn. Kristen Bell. BAD MOMS. We’ve been waiting for this. Check out this hot new Trailer!

Amy Mitchell (Mila Kunis) has a seemingly perfect life. She puts her family first, but her childish husband, demanding kids and idiot of a boss are finally getting to her.

When the alpha moms, including PTA Queen Bee Gwendolyn (Christina Applegate) at her kids’ school put on the pressure, Amy snaps and teams up with two other misfit moms (Kathryn Hahn, Kristen Bell) on a quest to free themselves from conventional responsibilities. They go on a well-deserved binge of freedom, fun and self-indulgence.