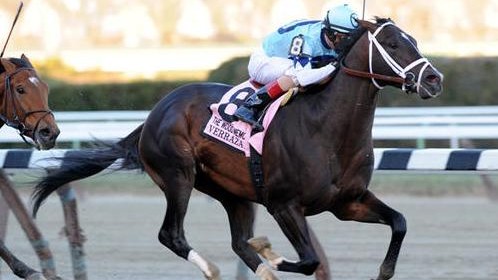 The Post Positions are drawn for America’s most popular Horse Race, the $2-million 139th Kentucky Derby (also known as “The Run for the Roses”)!  The expected Choice this year is Orb at 7/2 ($9 payouy on a $2 bet) coming in off a sharp win March 30th in the Florida Derby at Gulfstream Park. He certainly looks every bit a Winner with red-hot Rider Joel Rosario aboard, now winning four races in-a-row.  Orb has a record of four wins in seven starts for Owners Stuart Janney III and Phipps Stable.

Verrazano (pronounced “Vair-a-zon-o”) certainly will not make it easy for Orb, listed as the second choice at 4/1 ($10 payout on a $2 bet). Some may even dispute that he is the deserving Favourite, touting a perfect four-for-four record for the Partnership of Let’s Go Stable (Kevin Scatuorchio & Bryan Sullivan), Mrs. John Magnier, Michael Tabor & Derrick Smith.  Although he barely held-on in his last race to win the important Wood Memorial Stakes at Aqueduct in New York April 6th, Jockey John Velazquez  (whom also has ridden Orb prior) has given the hard-fighting Colt his vote of confidence.  After all, he has won his first four races by a combined 27 lengths.

Revolutionary certainly isn’t to be discounted.  Although he’s faced easier competition than the two top choices, he comes into the  Derby with three consecutive wins, including the Louisiana Derby on March 30th, fighting gamely to win.  He appears to be peaking at just the right moment and Calvin Borel, who has the distinction of riding one of the most celebrated Fillies of our time, Rachel Alexandra and setting a record winning three out of four consecutive Derbys; he gets the job for Winstar Farm. He is listed at 10/1 ($22 payout on a $2 bet).

Like Hip-Hop Music, the Kentucky Derby often is an East Coast/West Coast Rivalry and California often brings its A-Game and they do so this year with Goldencents, Winner of the Santa Anita Derby on April 6th in Arcadia, California.  He happens to be trained by Doug F. O’Neill who won this same race last year with ill-fated Champion I’ll Have Another.  Goldencents is listed at 5/1 ($12 payout on a $2 bet) and runs for W.C. Racing, Dave Kenney & RAP Racing.

Although the 10-furlong distance may be a challenge, Itsmyluckyday looks to be a decent price for Bettors at 15/1 ($32 payout on a $2 bet).  He stamped himself as one to watch after defeating last year’s two-year-old Champion Male Shanghai Bobby on January 26th in the Holy Bull Stakes with alarming speed.  He came back only to lose ever so narrowly to Orb as the Favourite in the Florida Derby.

Rich in history, the Kentucky Derby has several traditions associated with it.  The Fashion as always is a blast as Racing Fans come out in an extravagant display of hats.  The Mint Julep is the Beverage of Choice and rightfully so.  Think a Mojito, but made with Bourbon, less tangy, but just as refreshing.

Some Celebrities expected to partake in the Festivities this year include:

Justin Timberlake, Elizabeth Banks and Jerry O’Connell also are huge Horse Racing Fans and even if not attending surely this is a day they look forward to!

18 Competitors go forward Saturday.  Who will be your Pick?  See all the Contenders here on the Kentucky Derby‘s Official Website!