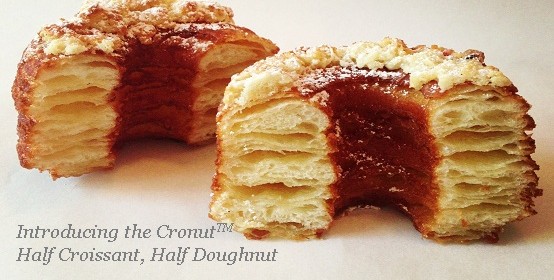 Basically, these need to come to Canada STAT! Originated at the Dominique Ansel Bakery on Spring Street in New York City, the Cronut Craze has taken over the Big Apple with fervour.  With people queuing in droves on the daily at the Bakery for their 8:00 AM opening, even Craigslisters are quick to cash-in, offering a Box of Two reportedly for up to $50 (U.S.) on the secondary market.  The retail originally at $5.00 a piece, but good luck on getting one. Insane.

A Cronut is simply/not so simply this: a half-Croissant, half-Donut, filmed with layer of Creme Anglaise.  Either it is sprinkled with sugar or glazed.  Flavours vary monthly.

Don’t confuse the Pastry simply as being deep-fried Croissant Dough though.  As per the Bakery, it is “made with a laminated dough similar to a croissant (but not exactly), the Cronut is first proofed and then fried in Grapeseed Oil at a specific temperature.”.

Although Cronuts launched only this May, they already have Fans internationally with Celebrities already singing its praises.  Kelly Ripa on-the-daily is plugging how amazing they are, telling Jerry Seinfeld today on Live! with Kelly and Michael, “There’s a reason why they’re shaped like an ‘O’!”.

Canadians may have to wait a while for the rage to hit north.  Some Shoppers at Loblaw’s fancy Carlton Store in Toronto earlier this year spotted a more simplified version of the Cronut, sans filling or the embellishments, before the fad even began.  And those businesses looking to follow suit should be aware that the name Cronuts actually is trademarked by Ansel, so expect some creative takes and various on the name to come.