“WISE DAN”, SMARTEST OF ALL IN THE WOODBINE MILE 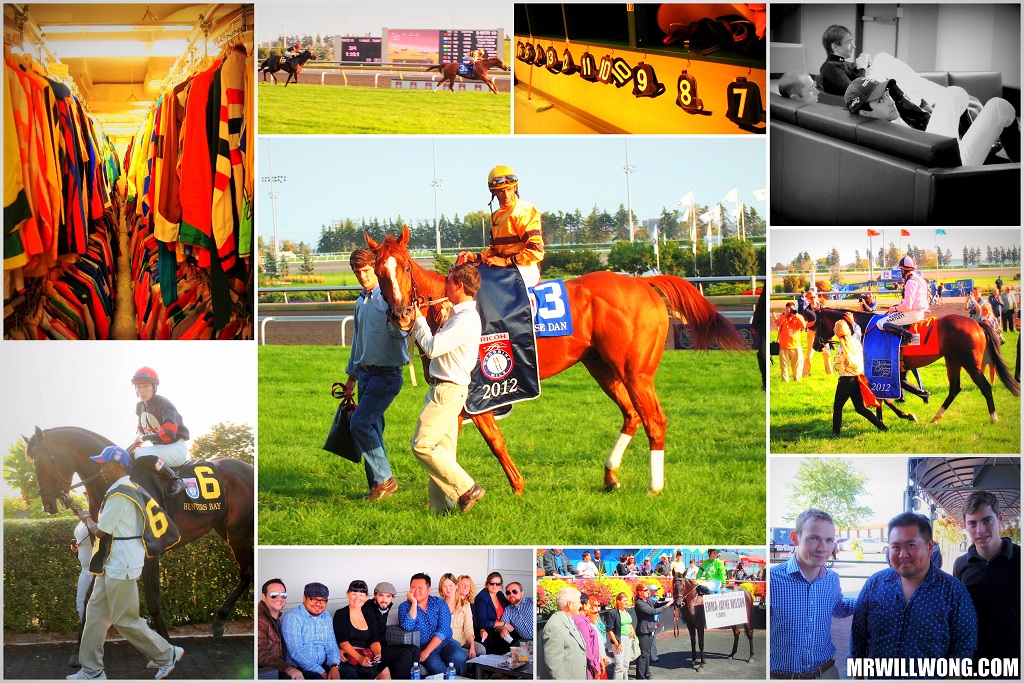 It was a superb day at Woodbine yesterday with the $1-million Ricoh Woodbine Mile being run before a large, excited crowd.  American invader  Wise Dan won the race by three lengths, ahead of local Star Hunters Bay (owned by Frank Stronach) who in his first-ever race on the grass has solidified himself as the leader of the Older Horse division at Woodbine. European invader Cityscape (GB) from the famed Juddmonte Farm was about four lengths behind the Winner in third.  The final time of the race was a decent 1:34.0, with the five-year-old Winner paying a heavily-backed $3.10, earning him a spot at Horse Racing’s Championship Day, the Breeders’ Cup this November at Santa Anita Park in California.

It was an absolute pleasure partying in the Champions Lounge with some of Toronto’s most influencial Tweeters including @Photojunkie, @TheDanLevy, @PHJoshua, @TrishCA and @RochLatinsky, as our plates were filled with deliciousness (Woodbine‘s Fried Chicken is unparalleled) and our glasses kept being filled!  It was amazing also hanging with  Penelope Miller – the Social Media Wiz behind America’s Best Racing, one of the most influencial Racing Sites in the World.  I am happy to report that most of us broke-even or even came out ahead after a thrilling afternoon at the races. Dare I say, some of us now are expert Bettors?

The day started off with a bang with my favourite Jockey, Emma-Jayne Wilson, earning her 1,000th win aboard D’Wildcat Gold.  Wilson began her career at the races in 2005 and since then she has always been a top Rider locally, never looking back. During our visit, we got to watch races from the Winner’s Circle and before the Woodbine Mile, had an opportunity to get up-close with the Contenders in the Paddock.  Our Tour led in part by Track Commentator and Sweetheart Dawn Lupul (a Fan of the Blog!) also led us to the Jockeys’ Room. We also got to see their colourful Silks Room and chat with some of the Jockeys.  I had a total Fanboy moment seeing Wilson order a Chocolate Milk at the Cafeteria and top American Riders Brice Blanc and Garrett Gomez watching TV!

Currently, Ontario’s Horse Racing Industry is funded heavily by revenues generated from on-track Slot Machines, but a decision has been made by the Ontario Government to end this in the face of our Deficit. Now is the time for us to be aware of the current state of the Industry:

-Up to 13,000 Horses are expected to be euthanized. Times are uncertain for Breeders, unsure whether or not to breed their Mares with Owners and potential Owners hesitant to buy not knowing for sure whether there will be races and purses available to make it worthwhile.

-Cuts in Purses mean less of a reason for World Class talent to make their way north to Woodbine, a devastating blow to the efforts it has made to stamp itself as one of the World’s finest Racetracks

In 2011, the Horse Racing Industry brought-in $575 million to the Province. Why are we punishing an “A-Student” with a Suspension?