With TIFF ’15 about to kick-off in one day, we asked our resident panel of film lovers which films they were most excited for at the Festival this year!  Check-out top selections below from David Baldwin, Jonathan Godfrey, Justin Waldman, George Kozera and me! 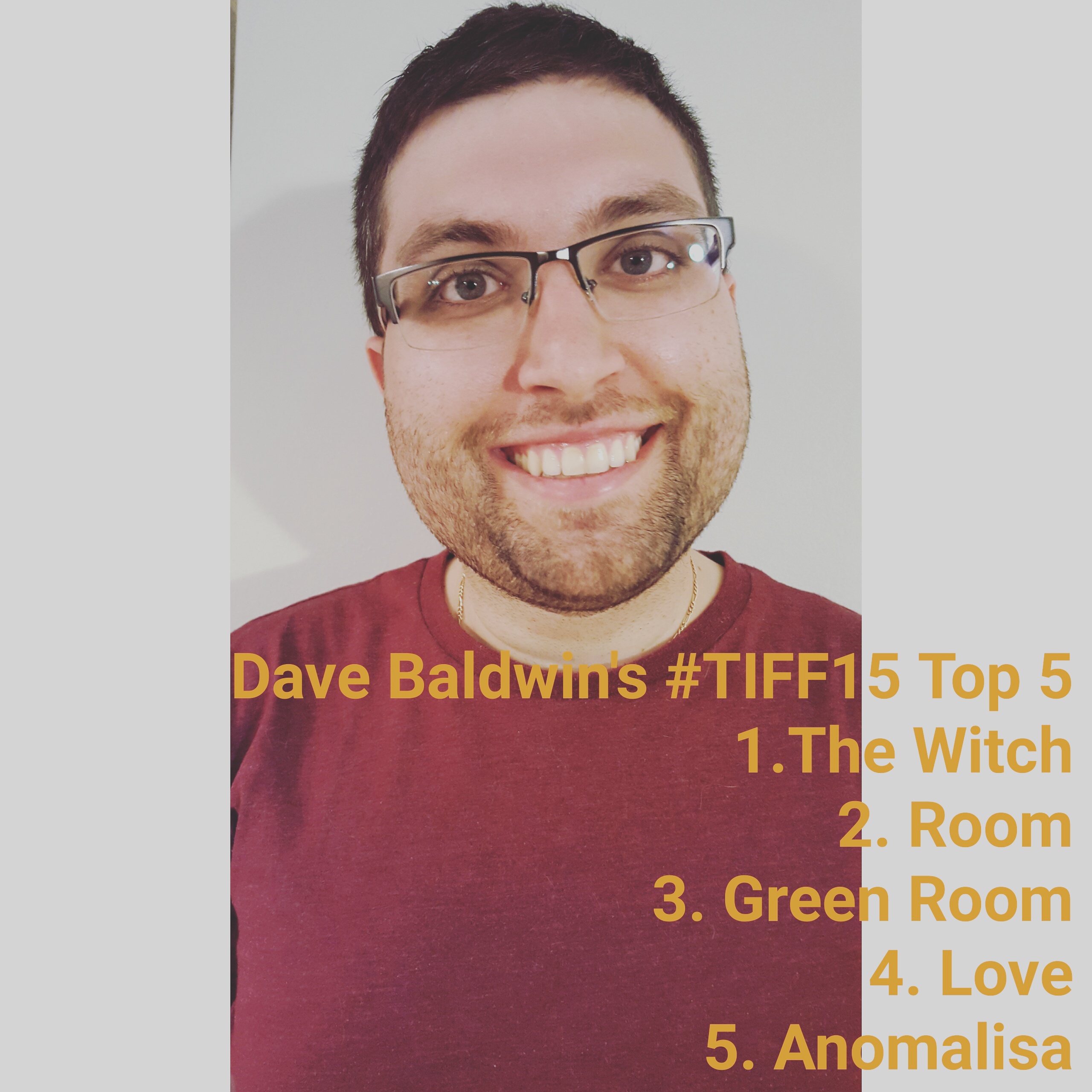 1. The Witch – super excited for this one. The buzz keeps building for this terrifying film, and it pains me that I need to wait until the end of the festival to see it!

2. Room – I read a one sentence synopsis and was hooked.

3. Green Room – Genuinely enjoyed Jeremy Saulnier’s slow-burn thriller Blue Ruin when I saw it at TIFF’13, and have been waiting for a follow-up ever since. Hoping it does not disappoint as this year’s Midnight Madness opening night film.

5. Anomalisa – the cinematic return of the brilliant and enigmatic Charlie Kaufman. I was thrown off initially by it being animated and filmed in stop-motion, but now it just intrigues me endlessly. 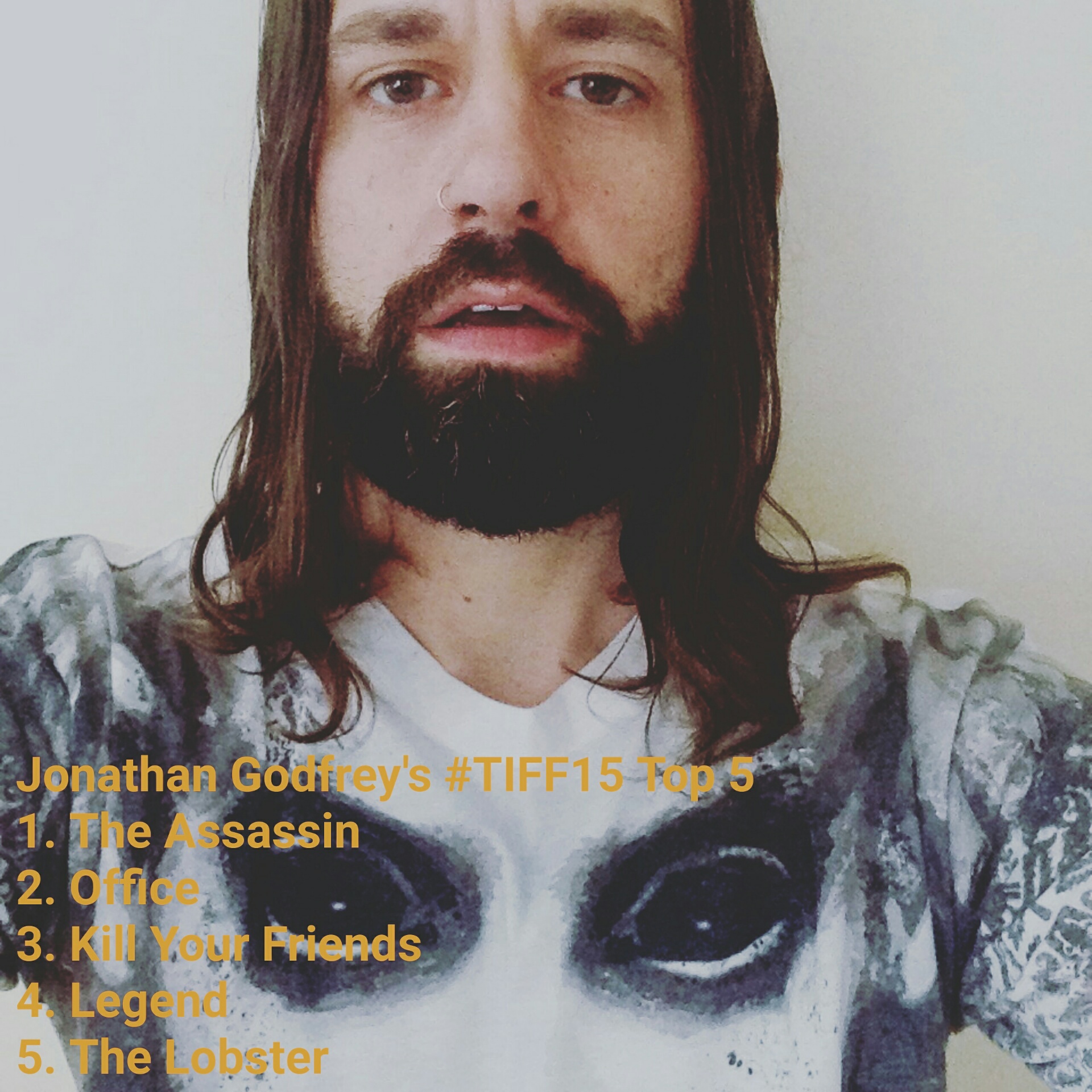 1. Last year I went into TIFF with a focus on France, whereas this year if my focus is anywhere it’s on China. First and foremost I’m dying to see The Assassin. This Tang Dynasty epic about a lovelorn hitman looks absolutely breathtaking.

2. On that note, I’m also eager to see Office. In a category all its own, Office is a 3D musical whose songs sing of love, loss and capitalist corruption.

3. On the other side of the continent comes Kill Your Friends. Starring Nicholas Hoult, it is the tale of an A&R’s ruthless quest to become the king of Britpop.

4. Also taking place in Jolly ol’ England is Legend. Starring Tom Hardy as both Kray twins, Legend is inspired by the rise of their criminal empire.

5. Last but not least is The Lobster. This oddly-titled film follows an equally odd narrative wherein its characters must find a mate or be transformed into an animal.

Those are my top five picks for TIFF ’15, with Angry Indian Goddesses being a very close sixth. The film about a group of Goan women discussing their storied lives is not to be overlooked. All in all it looks like another great year at the Festival of Festivals, one that I am happy to cover alongside Mr. Will‘s Crew. 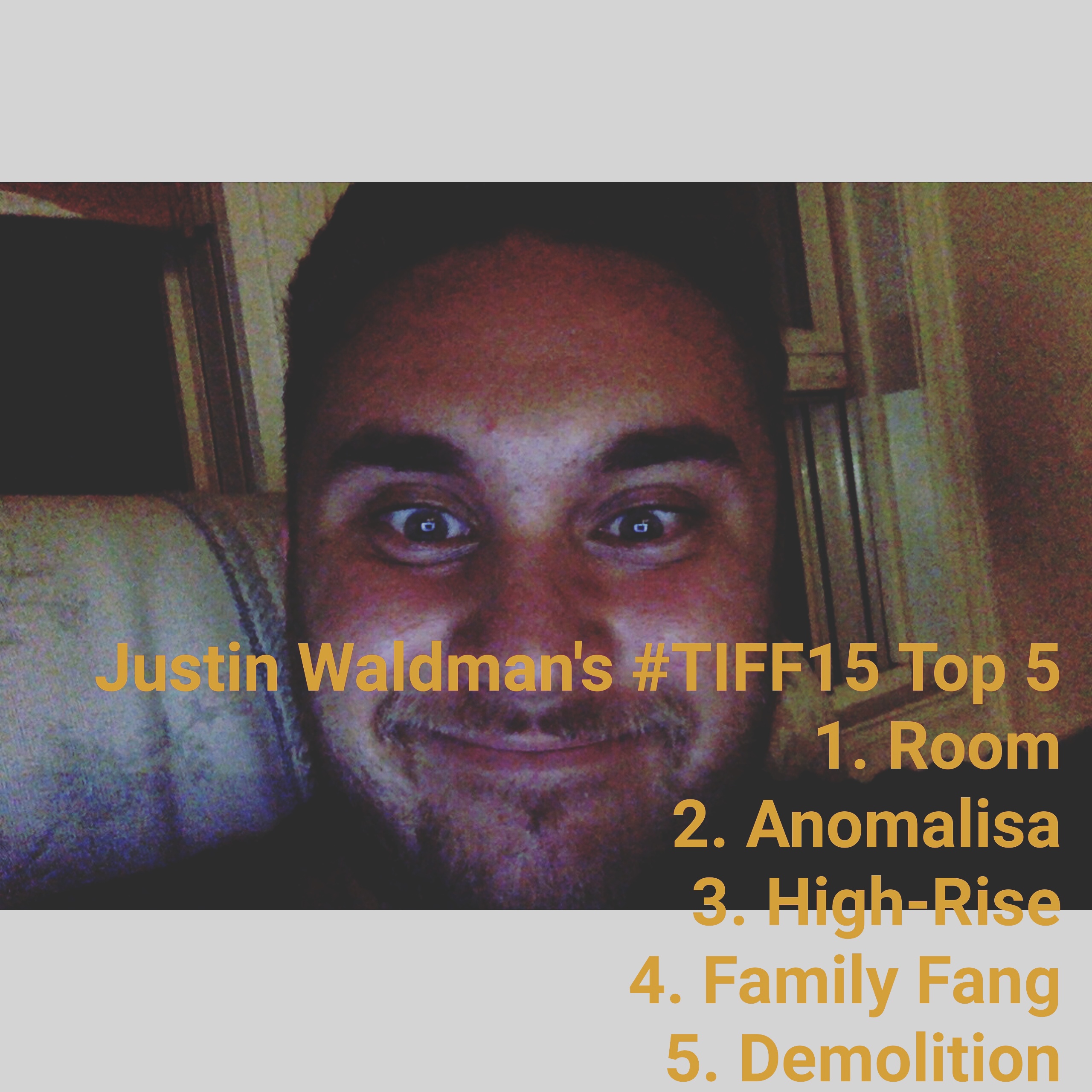 1. Room. Because of all the hype its been getting out of Teluride and when isn’t Brie Larson absolutely incredible?

3. High-Rise. Ben Wheatly directing Tom Hiddleston, what else can someone want?

5. Demolition. Hotly-anticipated new film from Jean-Marc Vallée starring Jake Gyllenhaal who has proven to be excellent in everything he’s been in of late. 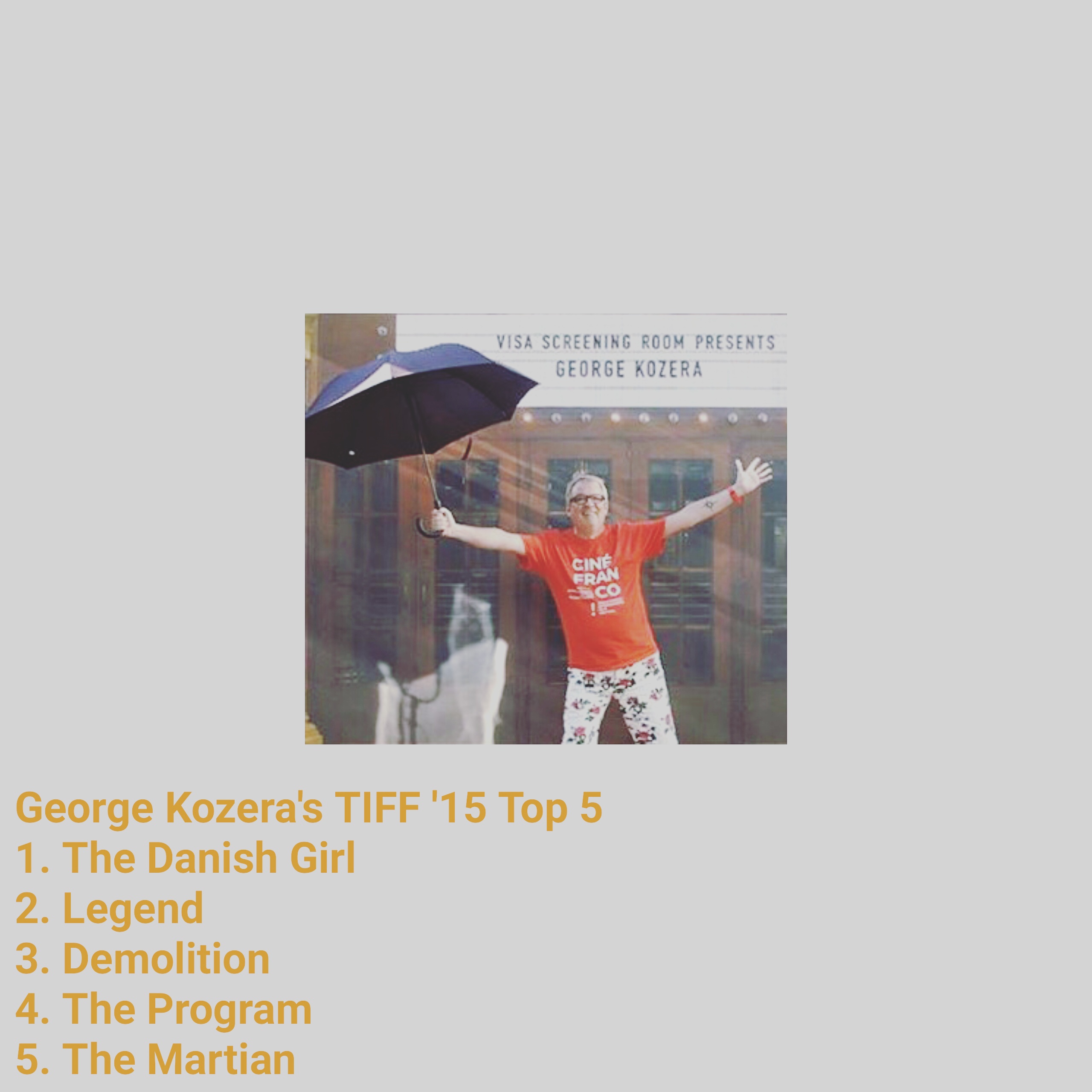 1. The Danish Girl. In my mind, Eddie Redmayne can do no wrong and for him to be directed by again Tom Hooper and the subject matter makes this my number one.
2. Legend. Two Tom Hardys for the price of one? Portraying Britain’s most notorious twin gangsters? Directed by the man who won an Oscar for writing L.A.Confidential? I’m salivating.
3. Demolition. You can never go wrong with a Jean-Marc Vallée movie. Add Jake Gyllenhaal and a plot that will make you need tissues to wipe away tears and it’s a must see.
4. The Program. Here’s hoping this movie will delve in deeper into what made Lance Armstrong the lying scumbag he is than THE ARMSTRONG LIE documentary.
5. The Martian. With Matt Damon and Jessica Chastain, it has to be better than the last time these two starred in an outer-space movie (INTERSTELLAR). 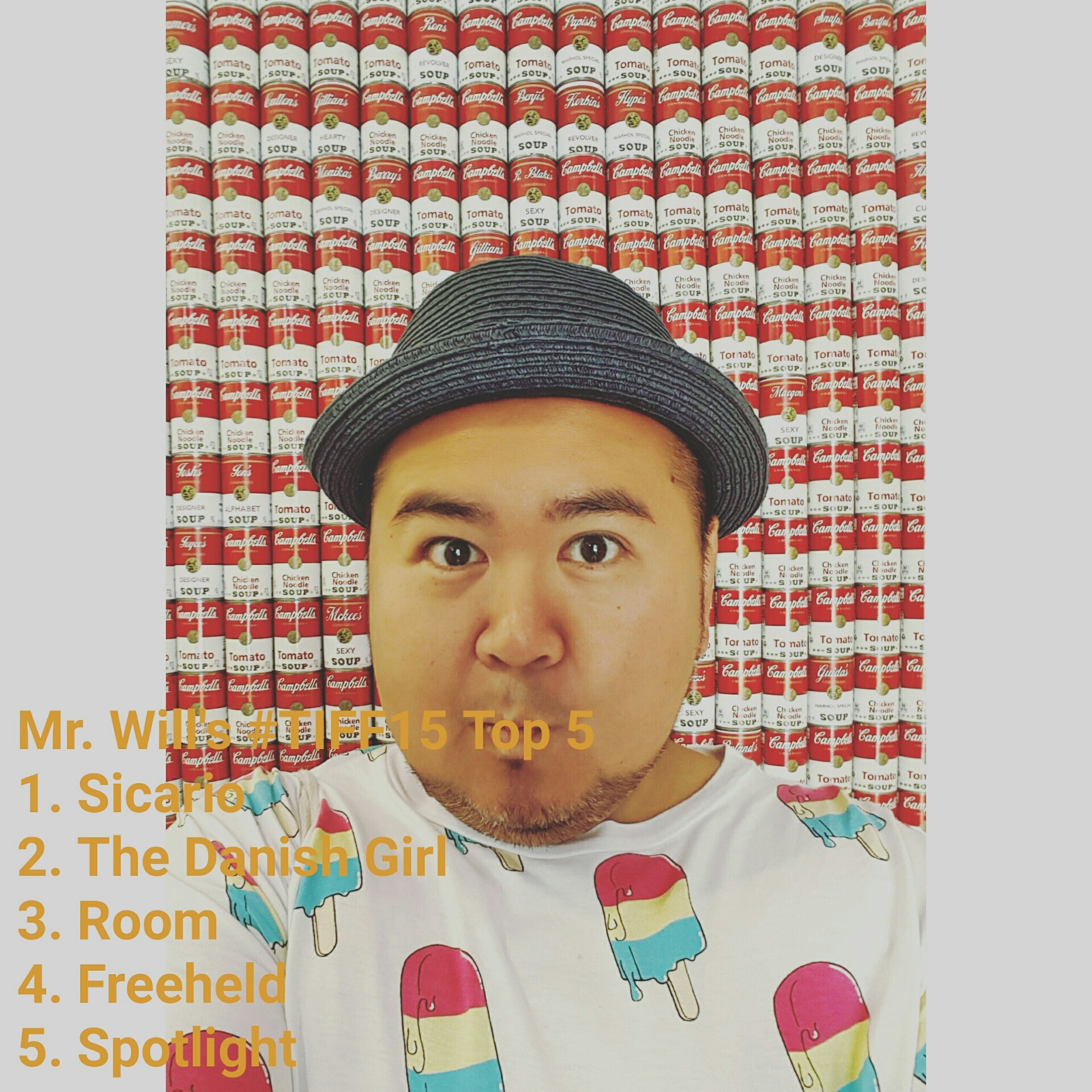 MR. WILL
1. Sicario. So mesmerized by this latest effort from one of Canada’s greatest Filmmakers, Denis Villeneuve.  It is riveting and impossible not to be  mesmerized once again by Academy Award winner, Benicio Del Toro.
2. The Danish Girl. The wait has been cruel for this latest effort from Tom Hooper (Les Misérables, The King’s Speech) and I cannot stop looping the deeply-intriguing trailer on YouTube. I just know I am going to love this. Highly-relevant with gender reassignment being at the forefront of the social conscience.
3. Room. “Brielieve” the hype surrounding Brie Larson here.  Both she and child actor Jacob Tremblay are devastatingly-good in this Toronto-shot Thriller/Drama.  You won’t want to leave the theatre – partly because you’ll need a few moments to dry the tears.
4. Freeheld.  Tear-inducing performances from Julianne Moore and Ellen Page in this fact-based drama about the fight for equality among same-sex couples make this an absolute must-see. Again, a timely Film with the subject matter being front and center.
5. Spotlight. An important film about the investigation that opened the dialogue about the Catholic Church abuse scandal. Phenomenal ensemble, and proud it was made partly in Toronto.
Honourable mentions to Bryan Cranston in Trumbo.  You’ll know why after you see it. Although it isn’t on the radars of many, tear-jerker Miss You Already starring Toni Collette and Drew Barrymore is a friendship drama of the highest caliber.  Think Beaches, minus the power ballads…
Happy TIFF, everyone! Which films are you looking forward to?
tiff