#BOXOFFICE: “GOOD BOYS” GETS A PAT ON THE BACK IN DEBUT

GOOD BOYS gets a pat on the back with a debut in top spot, taking $20 million from 3,204 theatres. The R-rated Comedy with a trio of child actors including Canada’s Jacob Tremblay, gets 80% on the Tomatometer and a B+ CinemaScore.

DISNEY’S THE LION KING is in third with $11.7 million with $495.9 million grossed over five weeks domestically.

THE ANGRY BIRDS MOVIE 2 debuts in fourth with $8.7 million from 3,869 theatres for Sony Pictures, tallying $11.4 million since its mid-week opening. It gets 75% on the Tomatometer and a B+ CinemaScore. Its previous installment opened with $38 million in 2016.

Opening in seventh is 47 METERS DOWN: UNCAGED with $6.5 million from 2,853 theatres for Entertainment Studios/VVS Films. It gets 50% on the Tomatometer and a C+ CinemaScore. Its Predecessor opened with $11.2 million in 2017.

Bruce Springsteen-inspired BLINDED BY THE LIGHT opens in eighth with $4.3 million from 2,307 theatres for New Line Cinema/Warner Bros. and gets 90% on the Tomatometer and an A- CinemaScore.

WHERE’D YOU GO, BERNADETTE rounds-out the Top Ten with $4 million from 2,404 theatres for Annapurna Pictures/eOne Films, while garnering 45% on the Tomatometer and a B CinemaScore.

eOne Films x Mr. Will want to give Readers a chance to win Advance Passes to see WHERE’D YOU GO BERNADETTE. Screenings are as follows:

Synopsis:
Based on the runaway bestseller, Where’d You Go, Bernadette is an inspiring comedy about Bernadette Fox (Academy Award winner Cate Blanchett), a loving mom who becomes compelled to reconnect with her creative passions after years of sacrificing herself for her family. Bernadette’s leap of faith takes her on an epic adventure that jump-starts her life and leads to her triumphant rediscovery. 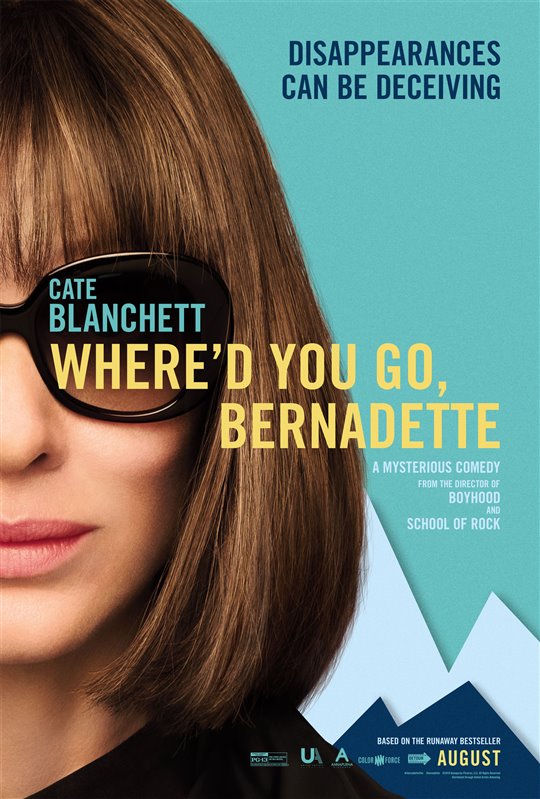