#FIRSTLOOK: “TAKEDOWN: THE DNA OF GSP” GETS LIMITED THEATRICAL RELEASE

UFC Fans can celebrate knowing that TAKEDOWN: THE DNA OF GSP is about to hit theatres!  The Documentary, released by Remstar Films, promises to give Fans intimate access to perhaps the great Mixed Martial Artist ever!

TAKEDOWN: THE DNA OF GSP is a feature-length documentary about Georges St-Pierre (aka GSP), reigning UFC Welterweight Champion, and arguably the greatest Mixed Martial Artist of all time. This gentle Warrior grew up in St-Isidore, Quebec. Bullied at school, he learned karate to defend himself and never looked back. He rocketed to the world championship at age 26, only to lose it in his first title defense. GSP fought back and regained his Title, but then suffered a potential career-ending knee injury. He clawed his way back again in an epic battle against Carlos Condit. From there, he defeated his long-time Rival Nick Diaz, the baddest boy in the UFC, whose psychological war of nerves almost got GSP. But like a great champion GSP, handled it all. The Film transforms the violence of ultimate fighting into visual poetry, and uses innovative techniques to convey GSP’s internal state of mind. His admiration for the Darwinian force of nature is conveyed in the Film using the motif of following a lone wolf. Powerful animated sequences also reflect the enormous influence of Eastern philosophy on GSP, a Man who is a true Athlete, and a Master strategist who loves his Sport.

Presales Nationwide are on now. More on which Theatres will be showing the Documentary here.

It’s honestly luck! This morning while visiting CTV Studios in Scarborough in the lobby, I ran into none other than UFC Light Heavyweight Champion and Hall of Famer, Tito Ortiz!  He was amazingly nice and navigated my Camera to snap this Selfie better than I ever could have!

Ortiz just landed in Toronto and will be here through Saturday for a series of appearances across the Greater Toronto Area and you too can meet him. The Mixed Martial Arts Icon will be signing Autographs and there also will be Photo Ops for Fans all he way from Whitby to St. Catharines! His stay will be capped-off by an appearance at Muzik Night Club Saturday night. 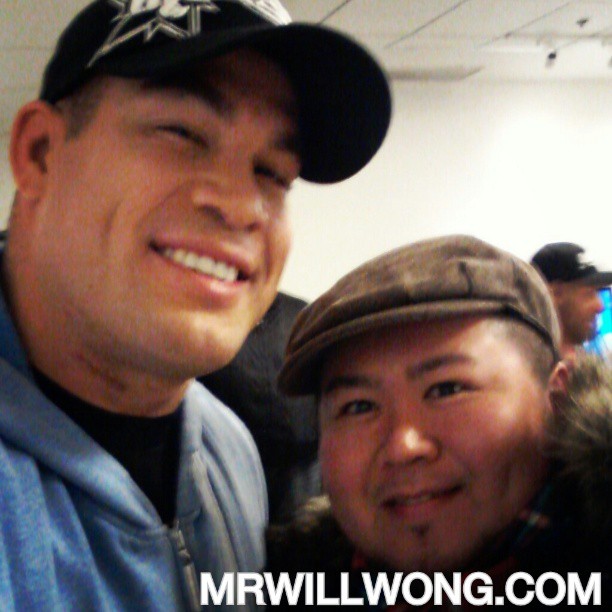 For more information, look below: