Toronto went Mariah Carazzzyy tonight as a portion of Queen Street was shut down to celebrate the unveiling of both Hudson’s Bay and Saks Fifth Avenue’s Holiday Windows. Here for a quick in-and-out performance was a newly-single Mariah Carey, international megastar and diva incomparable. She performed a festive two-song set for the eager crowd which queued several hours, piling from the two stores’ joint entrance to Eaton Centre, to be a part of the rare occasion.

Performing right before 8:00 PM, Carey delivered a rendition of Here Comes Santa Claus and also cheerful perennial holiday classic All I Want for Christmas is You on a red and green LED-lit stage. The performance was capped-off with fireworks and confetti before the pumped-up crowd were encouraged by Carey (paid a reported $1 million for the visit) to do some shopping! Both stores extended their hours till 11 PM for the occasion with treats and activations set up for the night.

Carey did a bit of shopping in a private guided tour earlier in the day as photographers snapped her browsing about. For her performance, she wore a satin gown in a festive red with a splash of her fave, pink.

There is only one diva I will wait three hours for in the cold. Such a joy seeing my queen #MariahCarey unveil Holiday windows for Saks x The Bay! 🎄 #Toronto #NikonD3300 #wu1a

See Carey‘s performance of All I Want for Christmas is You (apologies for shakiness, we were juggling our Samsung S7 too!) 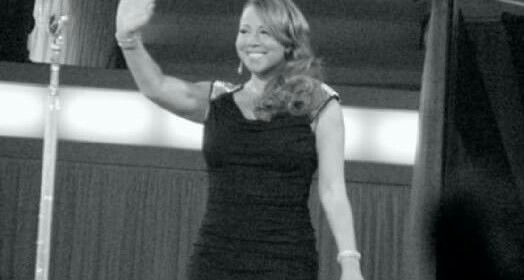 Toronto, get ready! Legendary superstar Mariah Carey will make a rare visit to Toronto next Thursday, November 3, 2016 to help unveil the holiday windows for both Saks Fifth Avenue and Hudson’s Bay. Taking place at the joint entrance for both retailers on Queen Street, Carey who has become synoynmous with the Holidays with perennial favourite All I Want for Christmas is You, will be performing live! Just for us!

The fun begins at 7:00 PM and everyone is invited for some shopping afterwards outta the cold and into the warm!  There will be festive treats served inside including monogramming and personalization activations, plus DJs as both stores open till 11:00 PM that night.

Do not miss this one night only holiday extravaganza!

Although Saks Fifth Avenue already is performing exceptionally-well at its just-launched Queen Street location, a first-of-its-kind foray into the Canadian market, Suburbanites can soon look forward to the even bigger and more fabulous Sherway Gardens location! The upscale retailer is set to open this Thursday over three shopping levels in the 138,706 square foot space. The top floor alone had 36 dressing rooms!

Balmain, Derek Lam, Thakoon, Marni, Alice + Olivia, Proenza Schouler, Alexander McQueen, Alexander Wang, Jimmy Choo, Manolo Blahnik, Lanvin. These are just some of the high-end brands featured at Saks Fifth Avenue Sherway and how it is determined to set itself aside in the Canadian fashion landscape are the risks it takes. Above this, Saks also will have offerings from their exclusive SFC Collection available too. Beauty, jewelry, handbags, sunglasses and accessories also are highlighted in addition to apparel and shoes.

Store Manager Michael Armstrong greeted an ultra-exclusive group of influencers today, giving us a chance to see what insiders are calling among the best Saks stores in the world at Sherway Gardens. Formerly of Holt Renfrew, Armstrong knew working for Saks Fifth Avenue was something he absolutely had to pursue after word got out that Saks would be launching in Canada back in 2013. After several rounds of extensive interviews which saw him flying to the U.S., including a car crash in a cab moments before a crucial go-see, he eventually would receive blessing from the President of Saks Fifth Avenue, beating-out almost 150 other candidates for the position.

The retailer makes its expansion north based on exceptional numbers indicating that Canadians are willing to shop Saks when it is the right product. Armstrong asks me, “Did you know that 80% of Canadians hold passports?”. Sales numbers showed that a significant number of Saks consumers were trekking to the U.S. to buy their unique and exclusive fashions.

He reveals what makes Canadian Saks Fifth Avenue stores different from its American counterparts is its intensive focus on service. Saks at your Service, they call it. Throughout the fashion haven, we see sculptures of Bellboys balancing layer upon layer of garment boxes. With 30+ personal shoppers (complete with individual bios) available as part of their Fifth Avenue Club, offering an exquisite and sophisticated private shopping experience to customers, Armstrong says “It doesn’t matter if you shop just once a year, the FAC is available to clientele of all types.”. We are given a tour of the Club’s impressive, spacious and cozy lounge, complete with a pantry. Colour tones are muted, contemporary, elegant, letting the customer shine. Customers also have the potential of getting customized alerts sent straight to them before stock are placed on display.

Want something quicker? Pusateri’s Fine Foods have become synonymous with the best in the City. A Food Hall by the top-tier Grocer is almost ready to launch on Saks Sherway’s bottom floor complete with Sushi, Nutella Café, Greenhouse Juice, a Champagne, Prosciutto and Raw Bar … and then some!

See a little Video of the excitement!