Taking place post Avengers: Endgame, Marvel Studios’ HAWKEYE gives us a chance the explore the world of its beloved titular Marvel Cinematic Universe superhero. With Jeremy Renner reprising the role of Clint Barton/Hawkeye, Hailee Steinfeld joins him as protégée Kate Bishop and they work together to confront some of his enemies of the past. And if you’re wondering why this is being released in time for the Holidays, the goal is for Hawkeye to make this happen in time to get home to his family for Christmas.

Our Justin Waldman was fortunate enough to sit-in on a Press Conference for the upcoming Series and in-attendance were:

Producer Kevin Feige comments on why the decision to explore more of Hawkeye in this Mini-Series.

Feige: “Well, primarily it’s Jeremy Renner. We want to see more Jeremy Renner... and more Jeremy Renner. And that goes back to the earliest days (yes, we’re both grandfathers now in the MCU), and the trust Jeremy had to jump into the MCU before Moderators said ‘Welcome to the MCU‘. It was ‘Hey! Do you want to do this thing with us and it could be really neat?’. And he said ‘yes’ and he got nominated for an Academy Award and he still said ‘yes’, and I thought that was pretty cool. But, all of the above they were relatively small obviously. Ultron we saw a little bit more. And then he just started stealing all the scenes. But it was always the intention to explore much more of the character’s history.”.

Tony Dalton plays Jack Duqesne and speaks on his relationship to the Bishop family in HAWKEYE.

Dalton: “Well he’s sort of a family friend and then he comes and falls in love Eleanor Bishop and they have a bit of a relationship. You don’t know where he’s coming from. What the hell else am I supposed to say? (laughs) You don’t wanna give away too much.”.

Vera Farmiga plays Eleanor Bishop and talks about what drew her most to the role of this mother and mentor to Kate.

Farmiga: “There’s a couple of things. I love Archery, hands down. I am an Archer. You guys don’t know this about me. My first job I played an Archer with Heath Ledger in a series called Roar where I had my bow and arrow and I’m good at it to be honest with you. If I wasn’t gonna be wielding that bow and arrow, I wanted to be next to someone with true grit and to be honest with you, I have marvelled at this young lady (Hailee Steinfeld) since that first movie. I also loved this very delicate and complex maternal relationship. It is a tricky sport raising a successful daughter, especially when the daughter and the mother have different ideas what that success means.”.

Thomas: “The Holidays I think predated me. I’ll take the Die Hard feel, why not? The story of a character like Clint just trying to live his life and trouble trying to find him is a trope we all love and enjoy. That clash of family time with business time, it’s a classic combo. For me it was just wonderful to wrap my arms around that.”.

Kevin Feige comments on maybe getting to see more Avengers: The Musical throughout the Show.

Feige: “Rogers: The Musical” was an idea early on about why he comes to New York, but I loved the idea and it gave a reason for a generic Christmas in New York. Clint taking the kids, it was a Daddy weekend before Christmas. And I had met the amazing Composer Mark Shaiman at an event – and I’m not a social guy – his husband is a giant Marvel fan. It gave us context for why he is in New York, context for Clint seeing himself in a way that the world sees Hawkeye. And gave us an amazing opportunity to have a song by Mark Shaiman.”.

Hailee Steinfeld talks about building a bond with Renner and whether or not he gave her any Archery tips.

Steinfeld: “I was never gonna shoot an actual arrow. That’s the first thing he told me. And for whatever reason, it didn’t occur to me that would be the case. So that’s that. As far as bonding, we really jumped right into this thing straight into the deep end together. So we were taking it as it was coming. I felt so grateful to have his support and mentorship in real life and as Kate. We shared a lot of laughs, didn’t we?”.

Renner: “For me, I just wanted to communicate that I had her back and that there was gonna be a lot of straight things that go on. It’s different than other types of Filmmaking. I only gave her the answers if she needed them.”.

Jeremy Renner talks about the theme of Survivor’s Guilt and how that might impact Hawkeye.

Renner: “I don’t operate on Survivor Guilt. I deal with the loss. There’s a lot of things that are loss. It’s addressed in this Show, which is beautifully intimate and brings our characters closer together, as well as the audience. There’s a lot of weight that’s carried. There’s seemingly a veneer of grumpiness in his resting face, but it comes from the horrors and tragedies and loss that come with the game. Managing losses is the superhero game. The brightness and lightness that Hailee‘s character brings-in counteracts that.”.

Marvel Studios’ “Hawkeye” is an original new series set in post-blip New York City where former Avenger Clint Barton aka Hawkeye (Jeremy Renner) has a seemingly simple mission: get back to his family for Christmas. But when a threat from his past shows up, Hawkeye reluctantly teams up with Kate Bishop (Hailee Steinfeld), a 22-year-old skilled archer and his biggest fan, to unravel a criminal conspiracy. The series also features Vera Farmiga, Fra Fee, Tony Dalton, Zahn McClarnon, Brian d’Arcy James and newcomer Alaqua Cox as Maya Lopez. Helmed by Rhys Thomas and directing duo Bert and Bertie, “Hawkeye” debuts exclusively on Disney+ on Nov. 24, 2021. 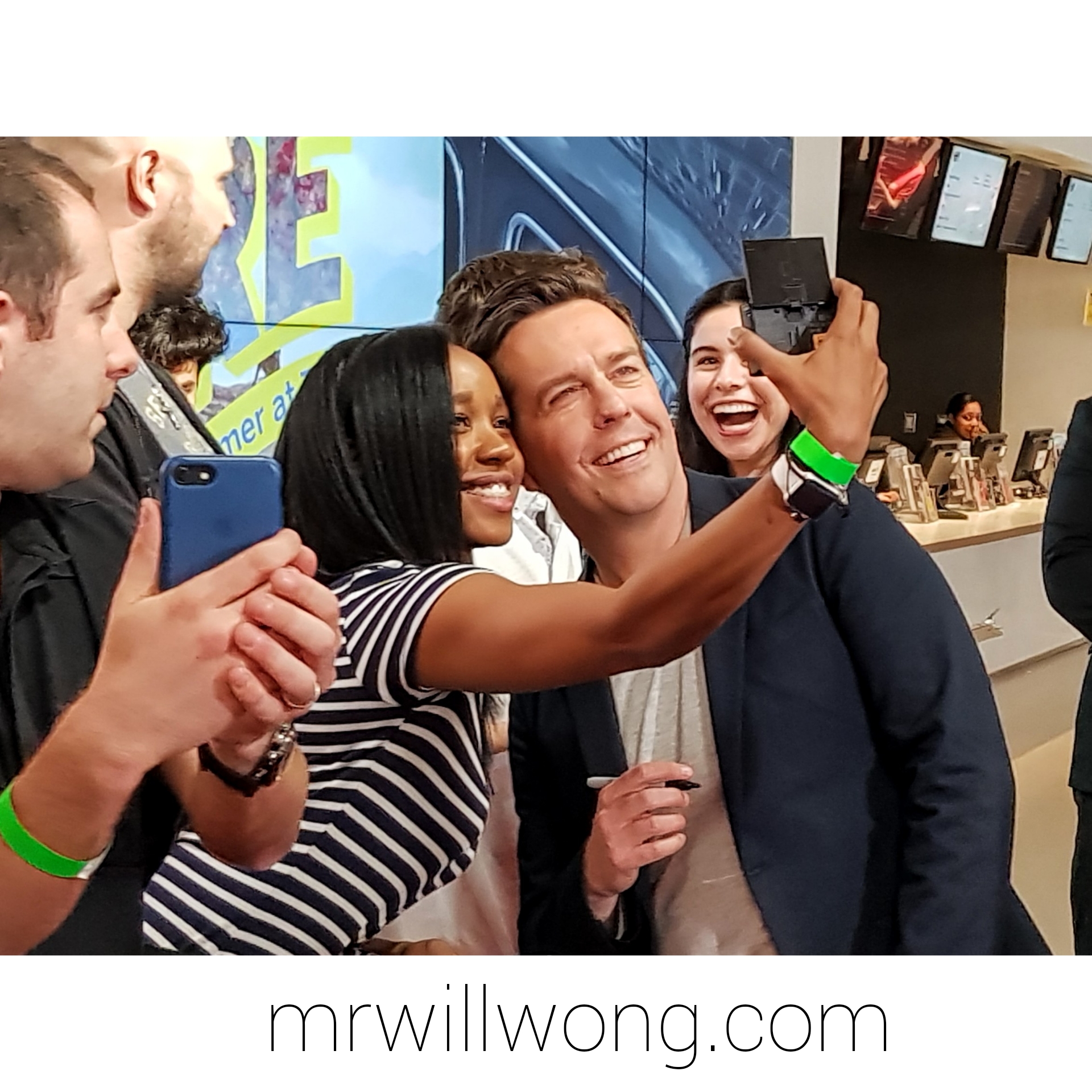 When mysterious spacecraft touch down across the globe, an elite team – led by expert linguist Louise Banks (Amy Adams) – are brought together to investigate.  As mankind teeters on the verge of global war, Banks and the team race against time for answers – and to find them, she will take a chance that could threaten her life, and quite possibly humanity

We do love our Tom Cruise. A new Teaser for the newly-named fifth installment of MISSION IMPOSSIBLE has just been released and we’re loving every minute of its two minutes. There’s humour thanks to Simon Pegg (camouflaged as a bush!), adrenaline (that plane door better open quick, Tom!) and the Franchise’s signature style – set to The Fugees’ Ready or Not – and that’s why Fans keep coming back for more!

The authenticity is killing me.

The Drama is about a former Con Artist and his Partner-in-Crime, who are enlisted by a Federal Agent to turn the tables against other Criminals and corrupt Politicians, namely the Mayor of Camden, New Jersey.  American Hustle stars Bradley Cooper, Jeremy Renner, Christian Bale, Amy Adams and Jennifer Lawrence.

Although there’s been no confirmation of this premiering at TIFF ’13, we’re still holding hope that David O. Russell‘s (The Fighter, Silver Linings Playbook) upcoming ’70s-era Crime-Drama, American Hustle, will get a bow in Toronto here in September.

The Film is based on the True Story for the ABSCAM Operation in which a Con Artist and his Girlfriend are enlisted by Federal Agent to turn the tables on other Con Artists, Politicians and Mobsters.

This brand new Trailer looks and feels absolutely authentic to the Era.  You must see it:

I love the idea of Amy Adams getting arrested and having a meltdown. I think I actually am in love with this Movie already!