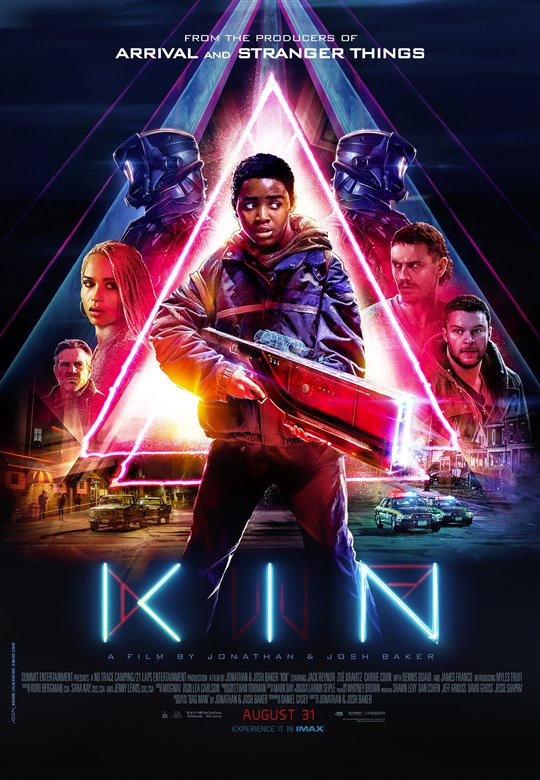 James Franco is back and badass, just how we love him. See the new Trailer for KIN!

KIN, a pulse-pounding crime thriller with a sci-fi twist, is the story of an unexpected hero destined for greatness. Chased by a vengeful criminal (James Franco) and a gang of otherworldly soldiers,​ a recently released ex-con (Jack Reynor) and his adopted teenage brother (Myles Truitt) are forced to go on the run with a weapon of mysterious origin as their only protection.

Elevation Pictures x Mr. Will want to give Readers a chance to win Run-of-Engagement Passes to see TIFF ’17 selection, THE DISASTER ARTIST, based on Greg Sestero‘s Memoir about his experience working on Tommy Wiseau‘s Cult Classic, THE ROOM.

A behind-the-scenes look at the making of Tommy Wiseau‘s The Room (2003), starring Tommy (James Franco) and his best friend, actor Greg Sestero (Dave Franco). The two met during an acting workshop, when Greg was just an aspiring actor.

Tommy takes Greg under his wing, setting him up in Los Angeles in an apartment Tommy rarely uses. While Greg soon finds an agent (Sharon Stone) and a girlfriend (Alison Brie), Tommy isn’t as lucky, so he decides to write, direct and star in his own movie, despite lacking talent in any of those areas.

The Room, made on a production budget of $6,000, was notoriously awful. It opened in two Los Angeles theaters in June 2003 and grossed a pitiful $1,200, but in a twist of fate, went on to earn a cult following, earning the dubious honor of being dubbed “the Citizen Kane of bad movies.”

The Disaster Artist chronicles Writer/Director Tommy Wiseau (James Franco) through the development, production and shocking success of the cult classic The Room.

The Film’s script could’ve become a mean mockery of Wiseau’s dream but instead it depicts an empathetic character study of him, all while being uproariously funny. It has a terrific transformative lead performance from Franco, a strong supporting cast, and many hilarious cameos. Franco becomes Wiseau in what is one of his greatest performances to date. Fans of The Room will not be disappointed with this comedic portrayal of how the beloved cult classic got made.

Well that’ll make your day! Did you know about this R-rated, innuendo-filled Animated Feature, SAUSAGE PARTY? The name just says it all. Just released today is a new Trailer which will drop your bleeping jaws.

Sausage Party, the first R-rated CG animated movie, is about one sausage leading a group of supermarket products on a quest to discover the truth about their existence and what really happens when they become chosen to leave the grocery store. The film features the vocal talents of a who’s who of today’s comedy stars – Seth Rogen, Kristen Wiig, Jonah Hill, Bill Hader, Michael Cera, James Franco, Danny McBride, Craig Robinson, Paul Rudd, Nick Kroll, David Krumholtz, Edward Norton and Salma Hayek.

Australian Actor Daniel Webber is a bit of an intriguing sort. The young star who has an extensive Résumé including TIFF Selection Sleeping Beauty, just arrived in Toronto and is set to begin filming next week on eagerly-awaited Hulu Series 11-22-63, based upon the Novel of the same name by Stephen King. Starring James Franco, the Series is about a Time Traveler who tries to go back in time to stop the Kennedy assassination.

We spotted Webber after a visit to  the Wardrobe Department, his hair colour being prepped to replicate a young Lee Harvey Oswald (the Sniper who assassinated JFK) he will portray and he was lovely taking time to chat about his role, which will see him extremely busy these next few weeks! He found it amusing he even was asked for an Autograph and recognized, laughing “You guys are hilarious!”.

Based on the Stephen King Novel about a Time Traveler who goes back in time to try and stop the assassination for Robert J. Kennedy, 11-22-63 has been filming in the Greater Toronto Area this Summer under the guidance of  Kevin MacDonald (The Last King of Scotland), starring James Franco. In recent weeks, filming has moved to Hamilton and Guelph.

We spotted one of its stars, George MacKay out and about this weekend and although he might be unfamiliar to many, Film Lovers will recognize him from TIFF ’14 Selection, PRIDE which played to a standing ovation. He tells me that he unfortunately couldn’t make it for the Festival last September, while most of his Co-Stars did, but meeting him randomly more than makes up for his absence!

11-22-63 films here through October, so expect to see some its Cast out and about come TIFF! Hulu will be streaming the exciting new Series.

With #GeorgeMacKay, star of #112263, directed by #JamesFranco. He also starred in #TIFF14 Selection, #PrideMovie.

TRUE STORY is now in theatres, via Fox Searchlight.

You must see this hilarious sketch from self-professed “Guy’s Girl” Liz (Nick Kroll) from Comedy Central‘s The Nick Kroll Show! Somehow she thinks that James Franco and Seth Rogen‘s new Film The Interview is actually about an assassination attempt on Kim Kardashian. Yeah, no.  You’ll just love her Publicity advice for the Duo.  LOL.

It’s totally NSFW and you might get a bit queasy at the display of affection.  You’ve been warned. Enjoy!

Watch the Sketch below:

Mr. Will and D Films want you to win THIRD PERSON on DVD.  The Paul Haggis-directed Film debuted at TIFF ’13 and now Readers across Canada will have the chance to own this star-studded Drama!

New York writer Michael (Liam Neeson) has recently split with his wife. His lover, Anna (Olivia Wilde), comes to visit him in a Paris hotel, but their relationship is complicated due to her inability to commit—he doesn’t know it, but she’s hiding a terrible secret.

Despite being accused of negligence in an accident that almost caused her son’s death, New Yorker Julia firmly denies being responsible. Charged with negligence, she loses custody of her son to his father Rick, who tries his best to take the boy away from her permanently.

American businessman Sean falls in love with a Gypsy woman while on a trip to Rome. He gets caught up in her life to the point that he’s involved in trying to free her kidnapped daughter from an Italian gangster. When he’s asked to help put up money for her ransom, Sean begins to wonder whether he’s being set up.