We’re just days away from the release of STRANGER THINGS SEASON 2. To get us into that spooky Halloween spirit, here is a First Look at some stills from the Series!

Synopsis:
Stranger Things: A love letter to the ’80s classics that captivated a generation, Stranger Things is set in 1983 Indiana, where a young boy vanishes into thin air. As friends, family and local police search for answers, they are drawn into an extraordinary mystery involving top-secret government experiments, terrifying supernatural forces and one very strange little girl.

Stranger Things 2: It’s 1984 and the citizens of Hawkins, Indiana are still reeling from the horrors of the Demogorgon and the secrets of Hawkins Lab. Will Byers has been rescued from the Upside Down but a bigger, sinister entity still threatens those who survived.

By Mr. Will Wong, Siobhán Rich and Justin Waldman

Now in its 23rd year, FAN EXPO returned once again to Toronto this weekend at the Metro Toronto Convention Centre celebrating fandom and bringing fans close to their idols of past and future. The extravaganza continues to pull-in upwards of 129,000 people from around the world with panels, exhibits, signings and photo ops galore. There’s even Speed-Dating for the geek-minded.

Cosplayers were out in full festive force with several paying tribute to the likes of The Joker, Harley Quinn, Wonder Woman and Doctor Who.

A major highlight this year was the reunion of the original ROCKY HORROR PICTURE SHOW Cast including a seldom-seen Tim Curry, who was available for photo ops and also pre-signed memorabilia. His Castmates Meat Loaf, Nell Campbell, Barry Bostwick and Patricia Quinn also made their way to Fan Expo.

A hot ticket item this weekend, selling-out, was photo ops for the Cast of STRANGER THINGS including Finn Wolfhard, Caleb McLaughlin and Gaten Matarazzo. The former also appeared with his fellow Castmates from another production in which he stars, hotly-anticipated Stephen King Remake IT, out next week.

This year, Fan Expo‘s Guest List was heavy on talent filming in the City including Cast members from STAR TREK: DISCOVERY, which sees a premiere on CBS this September including Sonequa Martin-Green, Anthony Rapp and Doug Jones.

Among the several dazzling displays and exhibits at Fan Expo Canada this year was an exhibit for eagerly-awaited THOR: RAGNAROK from Marvel, giving fans get an exclusive first look at the costumes and pieces seen in the Movie.

In this third Thor Movie, our hero faces his toughest villain yet, Hela played by Cate Blanchett, and her costume makes the villain even more daunting. A black and green costume with a 3D printed headpiece that resembles something similar to a creature from nightmares it truly is a sight to behold. As well the headpiece was never actually worn in the film but rather carried afterwards in very careful placement to fit the Film.

Next is Karl Urban’s Skurge and without giving away too much information about the character he seems to be a forced to be reckoned with as well. A double-sided axe that is truly remarkable accompanies his costume. As well his costume is made of actual steel and fabric, making it one of the more impressive costumes.

Loki’s (Tom Hiddleston) costume takes its final form in this third Film. There are little tidbits of goodies in the costume as well, if we remember the first Avengers Film, the necklace Loki wears has a small piece in his costume this time around as an ode to that other appearance.

Next we have hotly-anticipated Jeff Goldblum’s The Grandmaster whose fabric costume is so much more impressive in person that anyone could have ever imagined. The layers of fabric and costume it self really stands out and boasts the character.

Two really cool props from Ragnarok are from the Hulk Vs Thor scenes where we get a first up close look at Hulk’s sword and hammer that he uses in the fight. These props are massive and certainly a dream come true for fans to be able to see these props up close and personal.

One of the most impressive pieces at Fan Expo’s exhibit this year was Thor’s costume itself, as it is a mish-mash of different pieces. While he is away from Asgard and fighting, he acquires different pieces of his costume and writing on his costume that shows his journey. However the most interesting piece for fans would be Thor’s helmet, which many fans have dreamed of seeing since the first Movie came out.

Photos from the THOR: RAGNAROK Exhibit. Hover cursor left and right below to navigate.

Our Justin Waldman and Siobhán Rich had the pleasure of sitting-in on some of the hottest panels at Fan Expo and deliver us that scoop!

This gorgeous star of X-Men, Taken, The Wolverine, The Blacklist, How to Get Away with Murder, The Blacklist and Hemlock Grove, the latter filmed right in our City, returns to Toronto again once again. She tells her fans at her panel about her experience working with Hugh Jackman who would go on to be in the widely-acclaimed LOGAN. “It’s impossible to envision anyone else playing that role”, she says about her Co-Star. “I’m grateful to have worked with him.”.

On Game of Thrones’ Sophie Turner playing a role she helped shape in upcoming X-Men: Dark Phoenix, she says “I think she’s amazing. She reached out to me when she got cast as Jean Grey and asked what pointers I had for her and I told her she’s amazing and to just follow your gut and that’s what she did.”.

You know you’re iconic when your Films are remade and your roles are reprised. This iconic star of Rocky Horror Picture Show and the original Pennywise in Stephen King’s IT, which is projected to make a huge splash next weekend at the Box Office, made a rare appearance at this year’s Fan Expo treating fans to an intimate panel.

On which of his projects he considers his favourites, Curry says “Well, I guess one of them is Clue where my part was as big as the Bible. I also love Muppet Treasure Island.“.

On his phenomenal voicework in Animation, he says “I love it. I’ve never been a contortionist. The day is young and one day I hope to be.”.

While he is the idol of many who attended his panel, he cites Alec Guinness as being someone he looks up to.

This star of Doctor Who, Desperate Housewives, Torchwood, Legends of Tomorrow and of course Arrow is loved by many a fan.  He reflects on the fun he has had on the latter. “A lot of things happened and part of what I like to do is making people crack-up by doing something from across of them. Stephen (Amell) is really easy to crack-up”.

In what will be the most talked-about moment of Fan Expo Canada 2017, Barrowman was asked by a fan at his panel whom his best on-screen kiss was with.  A fan who went by the name Montana then rushed the stage to the shock of the crowd and Barrowman, and the two embraced in a kiss which had the fan going shirtless. The crowd went ecstatic.  David Tennant, his Doctor Who Co-Star was his favourite kiss, by the way!

Those of us who grew-up in the ’80s have fond memories of Turner‘s work in classics like Who Framed Roger Rabbit, Peggy Sue Got Married, Romancing the Stone and The Jewel of the Nile. Turner reflected on her beginnings as an actress with her fans. She claims “I didn’t see many films. I always felt like Film happened to me.”. “Most of my imagination was satisfied by reading. This is how I always thought I wanted to be an actor”, she says. “This is my 40th year in my profession and it is still absolutely thrilling to be doing it. I am now entering my fourth profession and I will be doing Cabaret. I can sing.”.

In addition to its presence being felt largely this year with several fans dressed as Dr. Who, Matt Smith returned to Fan Expo once again this year. On his eventual exit from the beloved Series, Smith says “Yeah, I always knew I was going to stay for another year. Maybe I would’ve stayed on for another year. But then I thought I couldn’t get too comfortable. It’s a difficult show to leave because it’s such a brilliant character but as an actor you have to continue to do things that frighten you and make you uncomfortable.”.

Smith currently can be seen in Netflix‘s acclaimed The Crown as Philip.

See some Snaps from Fan Expo Canada 2017. Navigate by hovering cursor over left and right of gallery.

Mr. Will + The Cast of Stranger Things

Missed it this year? Learn more about FAN EXPO CANADA right here and come next year! 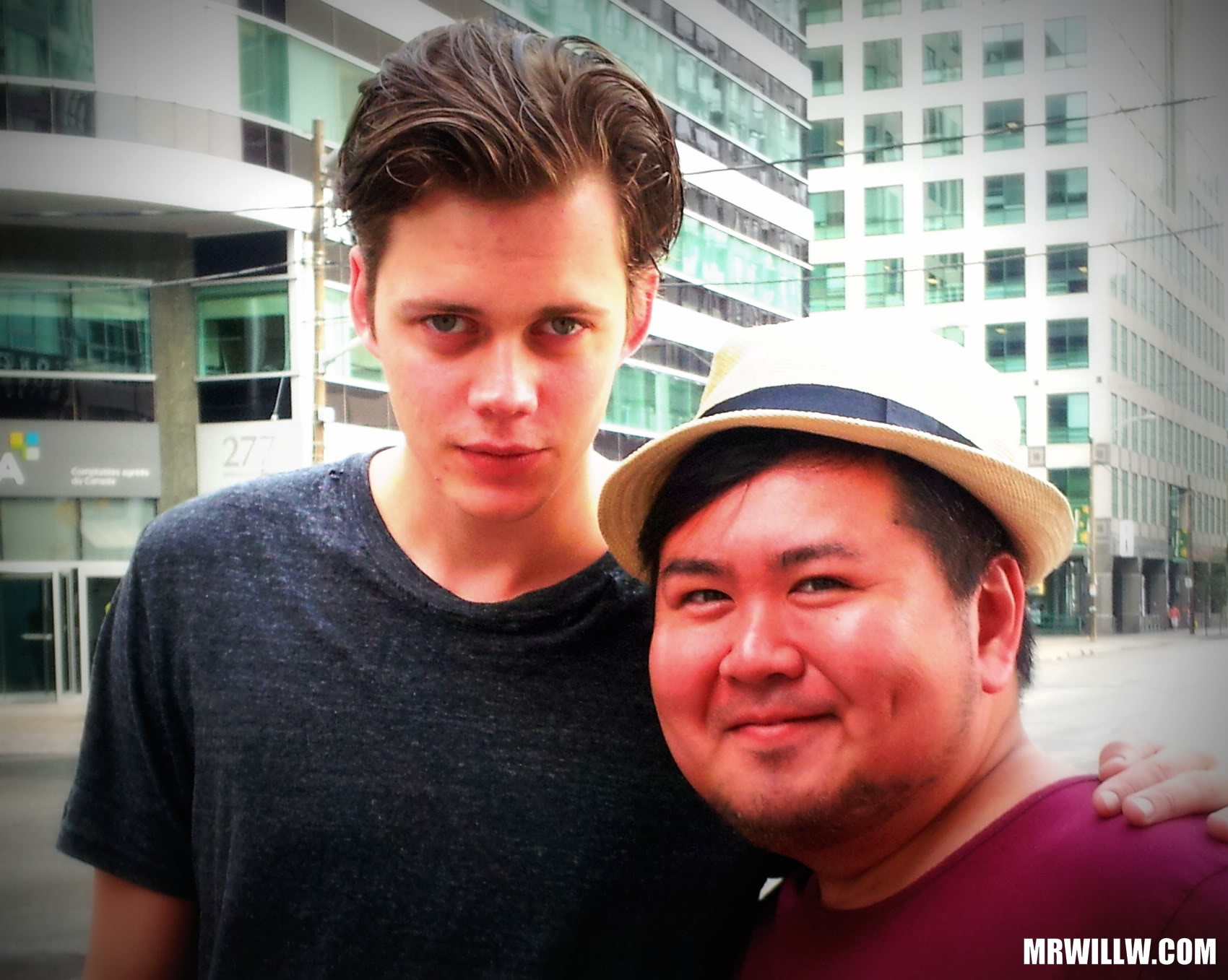