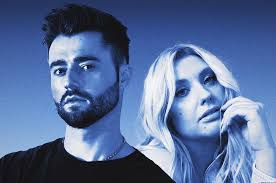 Frank Walker is my worlds – Horse Racing and Entertainment – converging, but most of all, he is a talented Producer and DJ who quickly is seeing a boost in profile, his Music enabling him the ability to trot the globe. The grandson of Magna International founder and Horse Racing powerhouse Frank Stronach, and son of Belinda Stronach and Donald Walker, could have taken a very different path in life as a successor in his family’s business operations, but thankfully he followed his heart and chose Music.

Walker today debuted his new single, “I GO DANCING (ft. Ella Henderson)“. The melodic Dance Bop is a nod to the Electronic Music he loved, growing-up in the early 2010s and one of his biggest influences is Kygo, whom he is set to tour with. The Song is a result of many WhatsApp messages back and forth, both being Artists being on different sides of the Atlantic.

Signed to Sony Music Canada, you actually already know his Music. Trust me. His “Heartbreak Back (ft. Riley Biederer)” still today is played heavily on Top 40 Radio, along with his Juno-nominated “Only When it Rains (ft. Astrid S)”.

Walker played a packed house at ToyBox, his first Toronto show in three years, timed together with the release of his new single. As a warm-up, he played a live set at Z103.5‘s studio, debuting his track to listeners and getting a unanimous vote of 94% from listeners in favour of the tune being added to the station’s rotation.

This was actually my first time ever meeting Walker, or I may have met him and didn’t even know it, though I have met his family and visited the family’s scenic Adena North property many times. A class act, just like his wonderful family and team who work for them!

So excited for him. His success hasn’t been overnight, he has been working for this a long time!