#GIVEAWAY: ENTER TO WIN A “THE SPONGEBOB MOVIE: SPONGE OUT OF WATER” PRIZE PACK

We’re so thrilled to see our Buddy SpongeBob doing so amazingly well after domination at the Box Office this weekend with his THE SPONGEBOB MOVIE: SPONGE OUT OF WATER, the #1 Movie in North America!  Paramount Pictures Canada and Mr. Will want to give Readers a chance to win a special Prize Pack from the Movie!

Each Prize Pack consists of:

1 x Run of Engagement Pass to see THE SPONGEBOB MOVIE: SPONGE OUT OF WATER 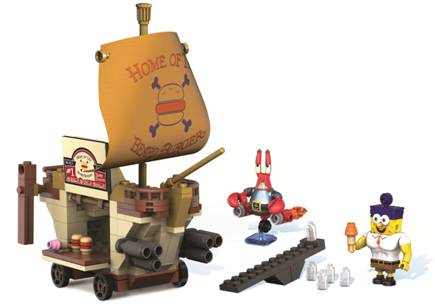 All aboard the deliciously fast Burgermobile by Mega Bloks SpongeBob SquarePants.  You’ll work up an appetite building this fun-filled boat, which converts into a food truck! Based on The SpongeBob Movie: Sponge Out of Water, the Burgermobile can shoot ice cream!  Invincibubble (aka SpongeBob) and Sir Pinch-a-lot (Mr. Krabs’ superhero alter-ego) are ready for a food fight and strike back with a bubble launcher, but make sure they keep an eye on the bottle containing the precious Krabby Patty recipe! You can collect all of the sets to build your own Bikini Bottom world!