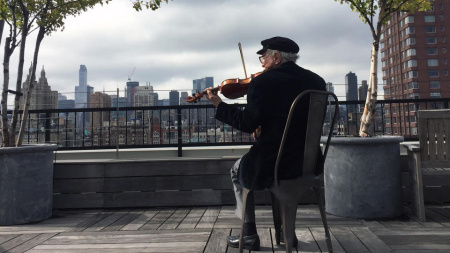 Fiddler on the Roof premiered in 55 years ago in New York City. With his Documentary Fiddler: A Miracle of Miracles, Director Max Lewkowicz explores the impact the Musical and its Oscar-winning Film have had on audiences around the world then and in all those years since 1964.

I need to be upfront when I say that I have never watched Fiddler on the Roof. I know what it is and I can describe the packaging of my parents’ double VHS copy of the Film, but before watching Lewkowicz’s Documentary, this goy could not accurately tell you the difference between a Tevye and a Topol. But after watching the Doc and hearing the Music, it shocked me how many songs I knew of from muscle memory – and how often they have been sampled and referenced in so many facets of Pop Culture.

For fans and people who do know about everything Fiddler, Lewkowicz’s Documentary is rich in content and talking head interviews from all of the living major players involved with the Broadway show and the Film (including the aforementioned Chaim Topol). Lewkowicz even explores some stage revivals of Fiddler, including student shows, a Stratford Festival show and a show from Japan, while also speaking with new cast members and choice fans like Lin-Manuel Miranda. It is very fascinating to watch and the cultural impact is really illuminating in many instances. The story is timeless and its ideas are universal, and to hear the multiple ways they are dissected is pretty extraordinary.

But some moments feel more stretched than others, and some really interesting elements are discussed and moved on from far too quickly. It seems like Lewkowicz wants to discuss literally everything and brings in literally everyone he can think of to talk, when he would have benefited from honing in and extrapolating on just a few things. And what’s with the odd water coloured animations?

All of that said, Fiddler: A Miracle of Miracles is an enjoyable exploration of a cultural phenomenon that continues to stand the test of time and will no doubt leave fans smiling and singing along. Now excuse me while I brush up on my Yiddish and finally watch that movie. L’chaim!

FIDDLER: A MIRACLE OF MIRACLES has its World Premiere during the Toronto Jewish Film Festival on May 8, 2019 at 7:30PM at the Hot Docs Ted Rogers Cinema. You can purchase tickets here.