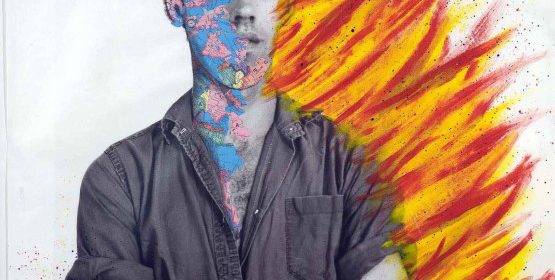 I have always been fascinated by the New York Art Scene circa the 1980s and a visit to Manhattan was never complete for me without visiting the Museum of Modern Art or the Whitney to view the works of Keith Haring, Jean-Michel Basquiat and their contemporaries. Their vision was bold and incendiary and when coupled with the burgeoning punk music scene, it was genuinely original and provocative. Under the skilled direction by Chris McKim and produced by World of Wonder’s (RuPaul’s Drag Race) Randy Barbato and Fenton Bailey, I was introduced to life and work of Artist/Activist David Wojnarowicz in a stunning and deeply moving Documentary.

WOJNAROWICZ, brilliantly utilizing archival footage, audio interviews (including Fran Lebowitz), personal journals and Super 8 movies, encapsulates the extraordinary life of this man – from escaping an abusive family life to hustling while living in Lower East Side; from being a musician with the Punk Band “3 Teens Kill 4” to early art installations and connections. As his art progressed, it became more sexually- explicit with very queer sensibilities and many battles were fought. The Documentary never sugar coats the subject matter nor does it shy away from the explicit art he produced and touches on his addiction to heroin, his combative relationship with his brother Stephen and his unconventional relationships (business and personal) with other Artists without judgment.

David Wojnarowicz’s fiery life ended tragically when he died of AIDS at the age of 37. His funeral was a political rally with men holding signs saying “Wojnarowicz died of AIDS due to Government Neglect”.

WOJNAROWICZ is powerful and unforgettable. The artist may now be silenced but his work and accomplishments are a testament to his unique genius. It opens March 19, 2021 on digital TIFF Bell Lightbox.