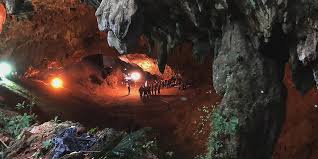 Review by Nicholas Porteous for Mr. Will Wong

The Rescue, which just premiered at TIFF ’21, cuts deep. It’s the stunning Documentary account of a Thai soccer team trapped in an underwater cave, and the group of over 5,000 workers who endeavoured to bring them out of the depths in a life-or-death, one-of-a-kind mission that most experts considered impossible right up to its final seconds. Directors Jimmy Chin and Elizabeth Chai Vasarhelyi–fresh off Free Solo, their previous Documentary about people who love doing things that could kill them at any second–weave together incredible footage from the rescue with reenactments so precise they could easily be mistaken for the real thing. The only giveaway is that some angles are too incredible, and the camera operators would surely endanger the mission itself.

The narrative takes precisely zero minutes to get going, beginning shortly after the rescue teams assemble. The Thai government is doing everything they can, but the skills required are so specific that only a handful of people in the world are capable of a chance at finding and extracting the team. “No private group […] had those skills. Only a private group of people who do it as a weekend hobby.” The Ocean’s Eleven of Cave Diving teams comes together, and many days pass before they give up any hope of finding the soccer team alive. Will this be the story of recovering lifeless bodies (at best)? The Rescue did a great job convincing me that all hope was lost before revealing the team was still alive, but trapped in an enclosure that took roughly three hours of expert Cave Diving to find. If you weren’t aware of the story, avoid any info and go for the ride. But be really careful if you’re claustrophobic.

This is an exhaustive film that covers practically every angle of the mission one could imagine, from the lives, relationships and personal insecurities of the cave divers to the incredible cg model of the cave and its vast network of rivers that puts Google Maps to shame. Despite the depth of coverage and the sheer volume of information, little if anything feels extraneous or overlong. Every detail is gripping. The clippy pacing makes its runtime feel half as long as it really is.

The Rescue‘s overall tone and style is nothing new. It’s a classic Doc Thriller and a moving story of human endurance, and the editing and musical choices lean into this. The sentimentality occasionally feels unearned, with a distinctly lame end credits song choice that threatened to pull me out of my overall appreciation for the storytelling at the last moment. I would have appreciated some room to breathe. It is a claustrophobic cave story, after all. But this is a minor quibble relative to the overwhelming power of The Rescue. See it on the biggest screen possible.