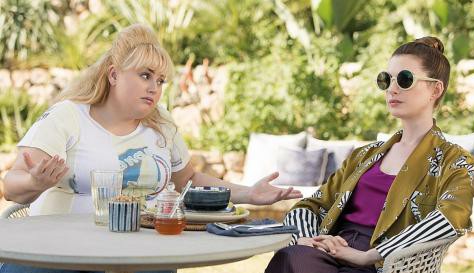 This Adaptation of the 1988 Comedy Dirty Rotten Scoundrels changes the genders from male to female con artists. Low-rent con artist Lonnie (Rebel Wilson) has recently been caught-on to in New York City and has headed to the south of France to broaden her horizons. It’s there that she meets high-class British con artist Josephine (Anne Hathaway). The two team up with the quest to take down some rotten men who only think about one thing. However, when something doesn’t go as planned the two women find themselves in a con winner-takes-all competition.

There has definitely been a shift happening in Hollywood and more roles, which are primarily thought to be male roles, are taking the female route. Having this Adaptation with female leads makes for a different viewing experience compared to the 1988 version with Michael Caine and Steve Martin.

The jokes are catered toward showing that women can use both their looks and brains in order to pull off even bigger cons then men, making this Adaptation quite the timely one. Although not all of the jokes have an impact there are many that are hilarious enough to carry the Film along. And the comedic chemistry between Wilson and Hathaway is a pleasure to watch.

These two talented women hold the Film together when some of the comedic moments go a bit overboard. Wilson from beginning to end dives in full throttle no matter how shocking or raunchy the jokes become. And Hathaway relishes in the multiple accents, smooth walking and talking Josephine.