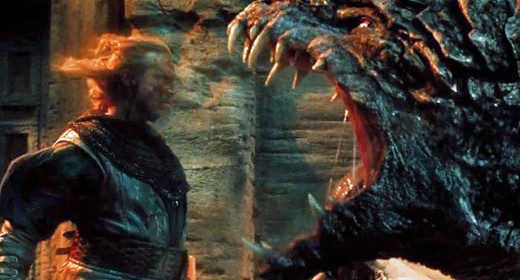 Seventh Son, a Movie that has been sitting on the shelf for longer than any Movie truly should have, finally sees the light of day. Unfortunately, the question has to be asked why the Movie ever left the dusty shelf it was left on years ago. The Film struggles to find itself, its Story feeling at times too familiar and at times unintentionally-funny that the Audience cannot muster enough to remain captivated.

The Film inspired by Joseph Delaney‘s The Spook’s Apprentice, focuses on Master Gregory (Jeff Bridges) who is a Spook – someone who hunts Witches –  and his Apprentices as they search for Mother Malkin (Julianne Moore) and try to take her down before the rise of the next Full Blood Moon. After Mother Malkin eliminates Master Gregory’s last Apprentice, he goes on a search to find the Seventh Son of the Seventh Son, which is where he meets Tom (Ben Barnes). This unlikely Duo  work together in their attempts to take down the evil Mother Malkin before she reeks havoc amongst all the Citizens of the World and turns Earth into a wasteland.

The brilliant Cast here sadly are  underutilized, which is unfortunate because we had high hopes.   The talents of Oscar Winner Jeff Bridges and Oscar Contender Julianne Moore certainly are heralded and need little introduction.  Add to that the likes of Djimon Hounsou and Olivia Williams, it all is rather disappointing that we managed still to walk away not feeling compelled.  To be frank, we felt the performances were rather hollow.

The redeeming factors in Seventh Son are the outstanding detail placed in Hair, Makeup and Costume Design.  Despite being underwhelmed by the Story itself, we couldn’t keep our eyes off the screen. Master Gregory and Mother Malkin – in both human and dragon form – were truly breathtaking, punctuating the latter’s ferocity and evilness.  Still, this Adventure might best be taken in your living room on a rainy day.